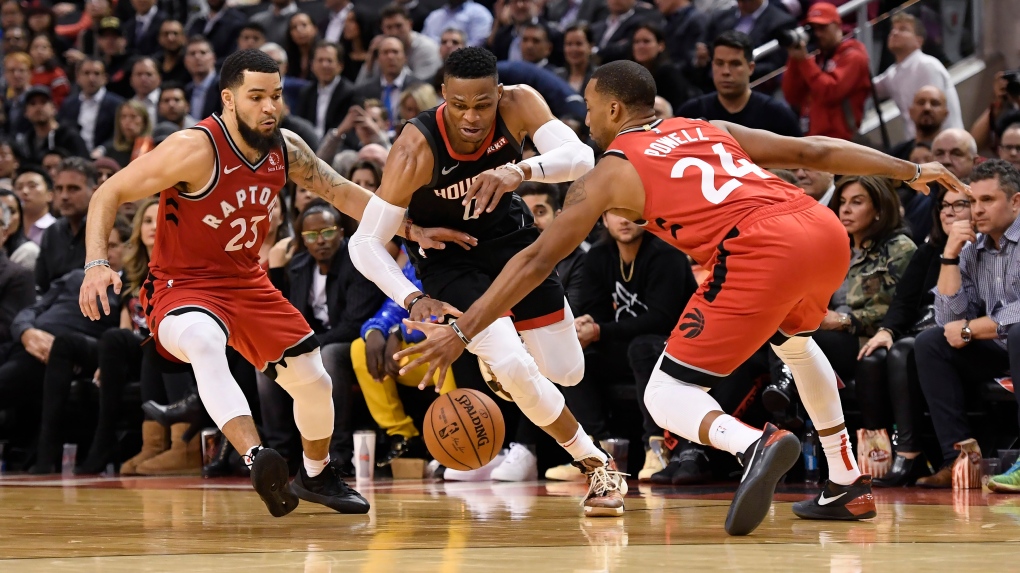 TORONTO -- Raptors coach Nick Nurse called it "an interesting experiment." But ultimately it proved to be another opposition failure in the James Harden laboratory.

Toronto restricted the Houston star to 23 points but failed to corral the rest of the Rockets in a 119-109 loss Thursday.

Ben McLemore led Houston (14-7) with 28 points as the Rockets snapped a three-game road losing streak. The six-foot-three guard made a career-high eight three-pointers while his 17 attempts from distance were the most attempted by an opposing player in Toronto franchise history.

In doubling up on Harden, who had combined for 110 points in his previous two games, other Rockets were left open. Houston threw up 55 three-pointers, making 22 -- both single-game opponent records for Toronto (15-6).

"James, to his credit, didn't force anything," said Houston coach Mike D'Antoni. "He said 'OK, double me and my teammates will score tonight,' and they did it."

Harden was often little more than an interested observer early on in the face of Toronto's extra attention, passing the ball and waiting to see what happened. He attempted just three shots in a first half that saw seven other players outscore him.

The Beard came into the game leading the league at 39.5 points per game. Milwaukee's Giannis Antetokounmpo was second, averaging 31.0.

On the first few possessions, Toronto's OG Anunoby stuck to Harden like glue even as they stood well away from the play. Fred VanVleet came over to help when Harden had the ball.

Harden, content to draw the attention and try to feed teammates, did not attempt a shot for seven minutes 53 seconds before slicing in for a layup.

"We've seen so many different defences throughout the course of the year," said Harden, who scored 17 of his points in the second half. "Tonight was our first time seeing this defence. Guys did an unbelievable job of moving their bodies and being ready to shoot."

Pascal Siakam had 24 for Toronto (15-6), which lost its second straight at home after winning its first nine of the season at Scotiabank Arena. VanVleet had 20 points while Kyle Lowry added 19.

Russell Westbrook had 19 points on 7-of-27 shooting, adding 13 rebounds and 11 assists for his fifth triple-double of the season. P.J. Tucker had 18 points and Danuel House Jr. added 16.

The stream of shots from distance produced rebounds with Houston outrebounding Toronto 54-45 including 20-12 on the offensive glass.

It was a sloppy game with 18 turnovers for Toronto and 23 for Houston.

Toronto kicked it up a gear in the third quarter, taking the lead for the first time after trailing by as many as 16. Still Houston, with Harden scoring 11 in the third, led 94-88 going into the final quarter.

Harden headed to the locker-room after taking a blow to the head at the end of the third as bodies clashed under the basket, but returned minutes later.

"He got an elbow off his temple. They checked for concussion but obviously he was fine," said D'Antoni.

Toronto got to within one at 101-100 only to see Houston reel off a 12-3 run. Leading 115-109 with 1:14 remaining, Houston successfully challenged a foul call on a failed Toronto three-pointer to seal the deal.

Added VanVleet: "If we would have scored 11 more points, we'd be geniuses and the defence was the best thing in the world and we'd be Harden-stoppers. But we lost and so it didn't work. So we go back to the drawing board and lace them up again. We've got a tough team on Sunday (in Philadelphia)."

Prior to the game, Nurse hinted that the team had something up its sleeve against Harden and the high-scoring Rockets.

"We've got an idea of something we're going to try," he said without elaborating. "We'll see if we have enough guts to go with it."

Rapper Drake watched from his courtside perch as Houston recorded 10 assists -- two by Harden -- on 11 made field goals in the quarter.

Houston led 34-28 after the first quarter, with Harden contributing three points. Siakam had 14 points on 6-of-10 shooting -- and two fouls -- in the quarter.

Harden's second shot came 6:47 into the second quarter when he drove into the paint, got the bucket and the foul. He missed his third, with less than 30 seconds in the half.

The Rockets led by as many as 16 in the second quarter as Toronto shooters went cold before rallying to cut the deficit to eight at the break. House, McLemore and Tucker accounted for 41 of Houston's 63 first-half points.

An Anunoby dunk cut the lead to three at 74-71 in the third and Lowry tied it up with a three-pointer as Toronto went on a 12-0 run. The Raptors took the lead for the first time at 76-75 on a pair of Lowry free throws.

Houston was coming off a double-overtime loss Tuesday in San Antonio. The Spurs defeat was Houston's fourth in its last six games, following an eight-game winning streak.

Toronto suffered its first home loss of the season Tuesday, a 121-110 overtime setback at the hands of the Miami Heat in Lowry's return after an 11-game absence due to a broken thumb.

Toronto had won seven straight and 11 of its previous 13 prior to the Miami defeat.

Thursday's game was played on Giants of Africa Night, marking the legacy of Nelson Mandela who died on Dec. 5, 2013.