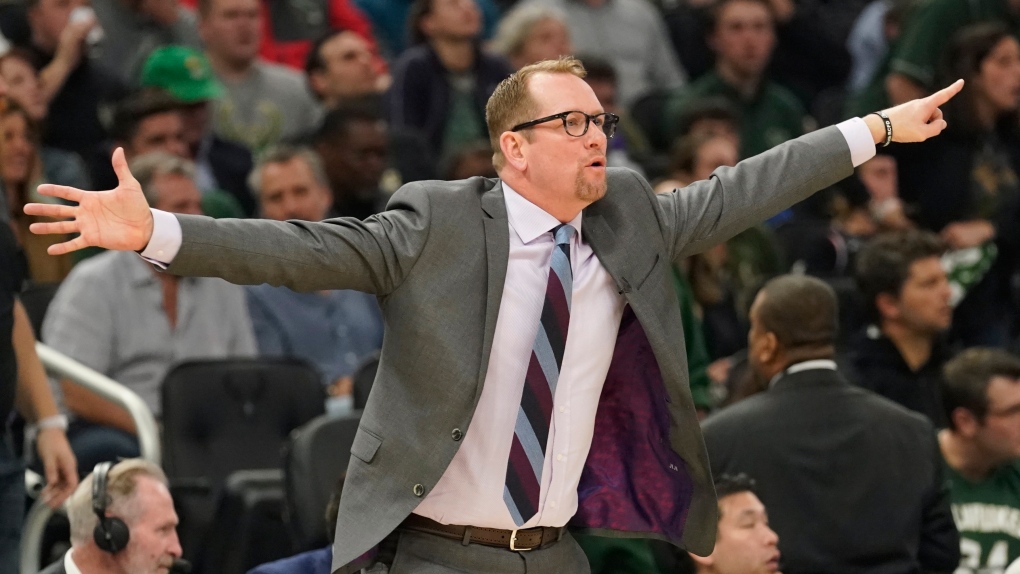 Toronto Raptors head coach Nick Nurse reacts during the first half of Game 5 of the NBA Eastern Conference basketball playoff finals against the Milwaukee Bucks Thursday, May 23, 2019, in Milwaukee. (AP Photo/Morry Gash)

The 51-year-old has agreed to coach Canada's men's basketball team at this summer's 2019 FIBA World Cup -- and possibly beyond -- a source confirmed to The Canadian Press on Sunday.

A media report from RDS first surfaced early Sunday afternoon, hours after Nurse led the Raptors to their first Eastern Conference championship in franchise history with a thrilling 100-94 Game 6 victory over Milwaukee. The Raptors will play the defending champion Golden State Warriors in the NBA Finals beginning Thursday in Toronto.

The World Cup is the main qualifying event for the 2020 Tokyo Olympics, and Canada Basketball had been searching for a senior men's head coach for months. Long-term head coach Jay Triano withdrew his name from the ongoing search for "personal reasons" in March. Canada Basketball's general manager of the men's program Rowan Barrett said at that time that they expected to have a coach in place by the end of the month.

Both Barrett and Canada Basketball CEO Glen Grunwald replied "no comment" when asked by The Canadian Press about Nurse's hiring. The Raptors also declined comment.

Expectations will be high for Canada's men's team. Nurse would take the reins of a national program that boasts the best collection of Canadian talent ever. Simply selecting the team will be a tough task, but a nice problem to have. About a dozen NBA players are in the mix, including guards Jamal Murray (Denver), Shai Gilgeous-Alexander (L.A. Clippers), and Cory Joseph (Indiana), and forwards Kelly Olynyk (Miami) and Tristan Thompson (Cleveland), along with NCAA standouts such as Duke star R.J. Barrett.

Canada has been drawn into a tough Group H with No. 6-ranked Lithuania, No. 11 Australia and 37th-ranked Senegal at the World Cup, which tips off Aug. 31 to Sept. 15 in China. The Canadians must finish top two to advance. The tournament's top seven teams earn automatic Olympic berths. Canada's men's team hasn't made an Olympic appearance since 2000 in Sydney, where Triano coached a squad led by Steve Nash to a 5-2 record and seventh-place finish.

Canada hasn't had a team in the World Cup since a winless 22nd-place finish in 2010 in Turkey.

Nurse is in his first season as head coach of Toronto's NBA franchise, promoted from assistant after the team fired Dwane Casey at the end of the 2017-18 season. Led by newcomer Kawhi Leonard, the Raptors finished second in the Eastern Conference this season at 58-24, two wins less than league-best Milwaukee.

Toronto topped the Orlando Magic, Philadelphia 76ers and Milwaukee this post-season to reach the NBA Finals.

Nurse was the lead assistant under head coach Chris Finch for host Great Britain at the 2012 Olympics in London.

He spent 11 seasons coaching in Europe, mostly in the British Basketball League. The Iowan was named head coach of the Iowa Energy of the G League in 2007. His first NBA job was with the Raptors, joining Casey as an assistant in 2013.