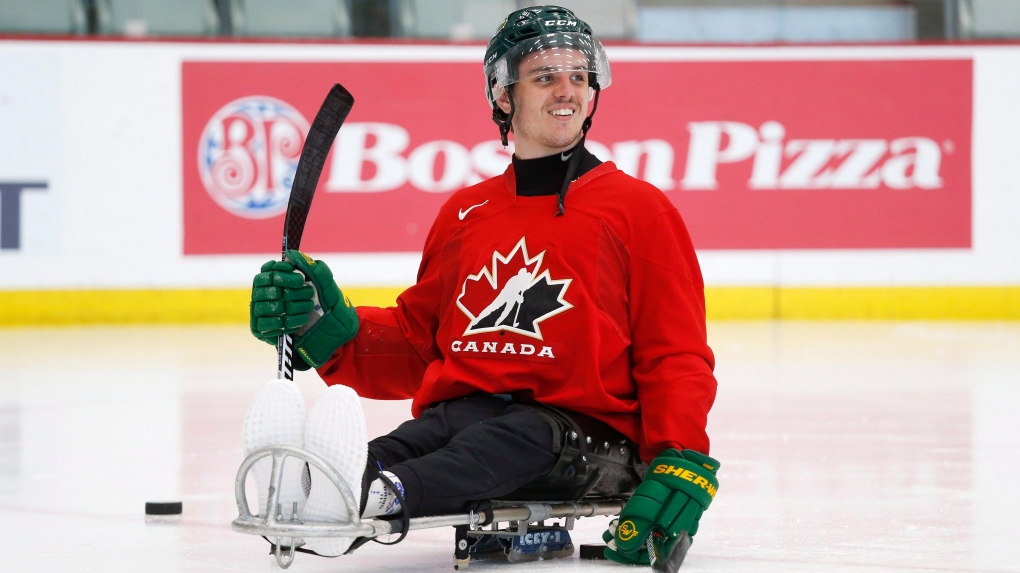 Ryan Straschnitzki takes to the ice to practice his sledge hockey skills in Calgary on Tuesday, August 7, 2018. Straschnitzki was injured in the Humboldt Broncos bus crash. THE CANADIAN PRESS/Todd Korol

CALGARY -- A hockey player paralyzed in the Humboldt Broncos bus crash is to depart on a 12,000-kilometre journey to Thailand later this week for surgery that could help restore some of his movement.

And one thing Ryan Straschnitzki is determined to take with him is his hockey sled.

"I'll be gone for five weeks," the 20-year-old told The Canadian Press following a gruelling physiotherapy workout. "If you do anything and work at it for so long, and then not do it for a month, you might be a little rusty."

Straschnitzki, who is paralyzed from the chest down, hopes to make the national sledge hockey team.

He and 12 others were injured when a semi truck blew through a stop sign and into the path of the Saskatchewan junior hockey team's bus in April 2018. Sixteen people died.

Straschnitzki hopes that an epidural stimulator implanted in his spine will help improve his daily life.

"This is the best technology out there right now for spinal cord injuries. Why not give it a shot?" he said.

"It can bring back certain functions that most people with spinal injuries don't have: muscle movement, bladder control. It's little things like that which can make a huge difference."

"We almost look at it as a Band-Aid below the level of injury. The stimulation then comes from the device. The recovery process is relatively straightforward and after a few days he's able to start rehabilitation," said Uyen Nguyen, executive director of the Synaptic Spinal Cord Injury and Neuro Rehabilitation Centre in Calgary, where Straschnitzki does his physio.

After the implant is placed in his back, a small device like a remote control will send electrical currents to his spinal cord to try to stimulate nerves and move limbs.

"I'm really excited for him. I think it's an incredible opportunity and, from all the reports and everything else we've seen, it's only a positive," said the player's mother, Michelle Straschnitzki, from the family's home in Airdrie, Alta.

She's not concerned about her son having unrealistic expectations.

"He is handling the realism of this much better than I am," she said. "I want him to walk but, keeping in mind that you don't want to get your hopes up too high, obviously this is a tremendous, positive step for him."

"We'll see what this surgery can do for him. I'd just like to see his mid-section going and for him to get a better quality of life."

He isn't surprised his son is bringing his hockey sled.

Although there won't be any ice in Thailand, Ryan Straschnitzki intends to sit in his sled and practise his shots and puck control.

He said he's ready for the surgery.

"I had the summer time to enjoy Stampede, hang with friends and do whatever I wanted to do. So now it's time to get back to business."

Straschnitzki is to leave Saturday and is due back in early December.