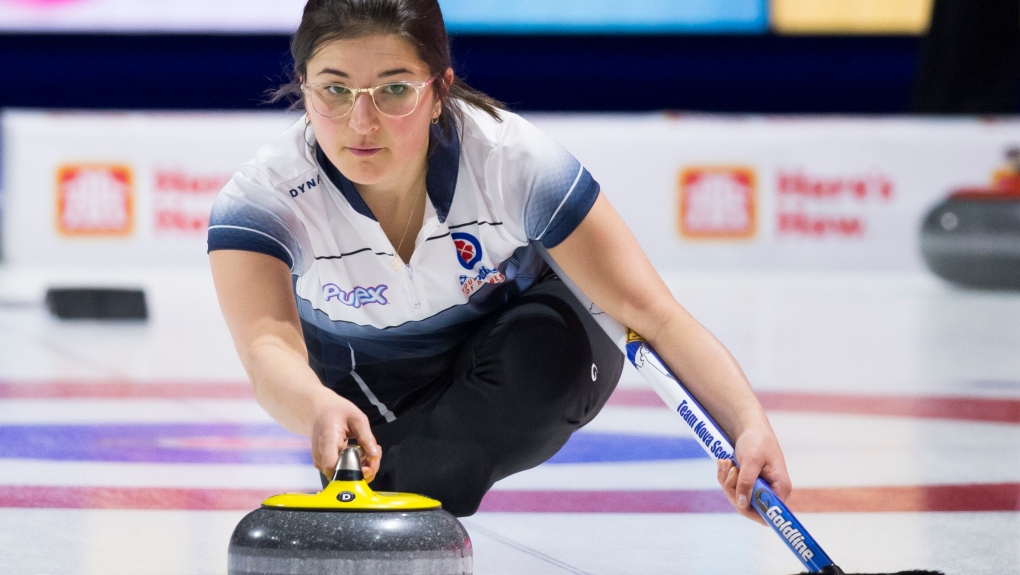 The 22-year-old lead for Nova Scotia's Mary-Anne Arsenault has been deaf since she contracted meningitis at 13 months old.

Sweeping and weight calls are crucial in curling. It took some trial and error this season for Arsenault, Logan, third Christina Black and second Jennifer Baxter to come with a strategy.

"At the beginning we didn't have anything in place," Logan said. "We just went out as normal and worked as a team and communicated as any other team would.

"We realized a lot of communication was being missed on my end."

Logan discovered her cochlear implants would pick up someone speaking into a Bluetooth microphone.

Arsenault, who is Logan's aunt, wore the microphone and also put coloured duct tape on her mitts to provide visual cues for Logan.

"It's nice to have that first quick glance to understand if she wants us to sweep or not," Logan said.

"But then about halfway through the season, Jen looked at me and asked me if I was hearing what she was saying to me as we were sweeping down the ice.

"I didn't know because you don't know what you can't hear. Once we tested it out by putting the mic on her, it was like, oh my gosh, it just opened my eyes to the fact that I was missing everything the other sweeper was saying.

"To have the mic on them and be able to rely on more visual cues for the line call together, we finally found a way to make it work."

Added Arsenault: "It was more important for her to hear what her fellow sweeper was saying than it was for her to hear me. We've switched her to the outside sweeper so she's the finisher all the time.

"The reaction time doesn't need to be as fast as if you try to keep it straight."

Logan has medical clearance to use the microphone at the Scotties Tournament of Hearts in Moose Jaw, Sask.

"It's a sport that has worked so hard to be accessible for so many," she said.

Arsenault was in the delivery room when her sister gave birth to Logan.

"When she got this disease and lost her hearing, it was the end of the world for us," Arsenault said. "Everybody cried and thought it was the worst thing in the world.

"She's just risen to the occasion.

"She calls it 'deaf perks' sometimes when she has to sleep in a room with somebody that snores for instance.

"Deaf perks, what kid comes up with that? It's her attitude that gets her ahead. She doesn't let her disability stop her."

Arsenault was a five-time Canadian and two-time world champion playing second for Colleen Jones. The 51-year-old is skipping Nova Scotia at the Hearts for a fifth time.

"She's been an inspiration of mine growing up," Logan said. "Watching her success competing at this level and from the day I started curling it was my dream to make it to the Scotties.

"The fact I'm doing it with her, that makes it more special."

Logan is a business graduate of St. Francis Xavier University. She collects used hearing aids and redistributes them through her Hearing For All initiative.

"There were times in the season when I felt quite low and I questioned (if) I would be able to make it to this stage in times we were struggling.

"We kept pushing, we kept persevering. We found a way to make it work at the right time."

This report by The Canadian Press was first published Feb. 15, 2020.