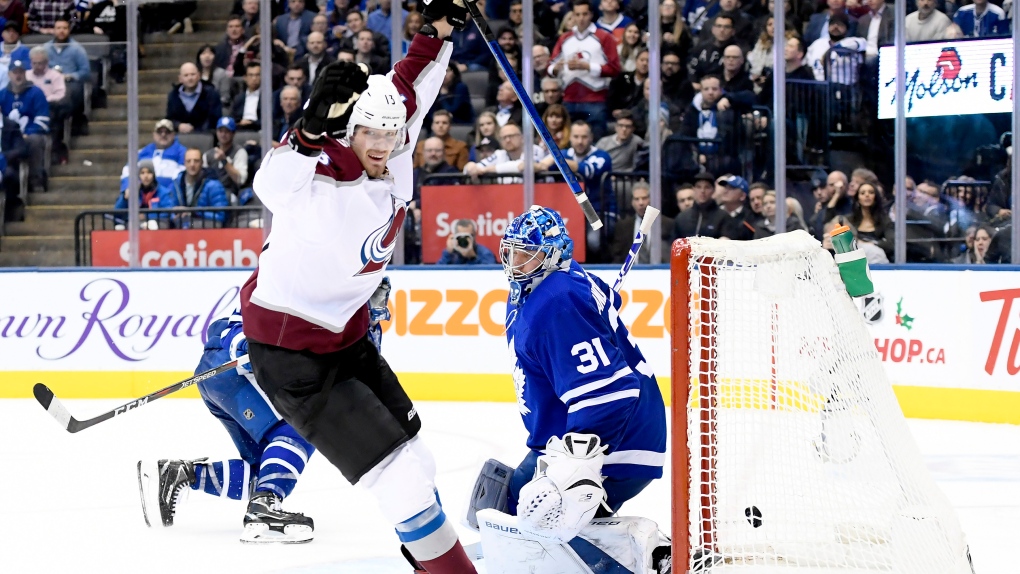 TORONTO -- Frederik Andersen wanted to battle with his teammates.

Coming off an ugly 6-1 loss in Philadelphia a night earlier -- one where he was left hung out to dry late -- Toronto's No. 1 goalie was scheduled to watch from the bench Wednesday against the Colorado Avalanche.

Andersen hadn't played back-to-back games for the Maple Leafs since January 2017, but felt it was important to man the crease on short rest.

The 30-year-old did his part and the club's overall effort was there. One crucial mistake, however, turned out to be the difference.

Valeri Nichushkin took advantage of a brutal Toronto miscue to score short-handed in the third period as the Avalanche downed the Leafs 3-1.

After killing off Jake Muzzin's four-minute penalty for high-sticking, thanks in large part to Andersen's huge stop on Joonas Donskoi, the Leafs' only man advantage of the evening turned into a disaster.

Jason Spezza's stick exploded on a shot, and as the veteran centre went to the bench, he tried to keep the puck in with his feet at the blue line.

Instead, Spezza got caught up with Leafs defenceman Morgan Rielly, allowing Nichushkin to move in all alone and bury his third goal of the season at 6:40.

"A tough play," said Spezza. "I'm going to the bench and then I hear somebody yell the puck is coming, so I make a split-second decision to play it and (Rielly) yells that he's there.

"I kind of just froze to try to not get in his way and, in turn, got in his way more. That game falls on me."

Nathan MacKinnon, with a goal and an assist, and Donskoi, into an empty net, also scored for Colorado (17-8-2). Philipp Grubauer stopped 38 shots for the rested Avalanche.

Zach Hyman replied for Toronto (13-13-4). Andersen, who asked rookie head coach Sheldon Keefe to give him the net for a second straight night, finished with 27 saves.

"The way the guys got called out after last game, I wanted to be out there," Andersen said.

"He's a real leader for us," Leafs captain John Tavares said of his goalie. "He sets a real tone for us and the backbone of our group. He played great, he gave us a great chance to win. It's too bad we didn't reward him."

The Leafs also had Mitch Marner back in the lineup after the winger missed 11 games with a high ankle sprain suffered Nov. 9.

"It's a crappy outcome," Marner said. "We've just got to make sure we keep building."

Keefe, meanwhile, dropped to 4-3-0 since taking over for Mike Babcock, but had no issue with his team's effort as it continues to learn new systems.

"It was a real challenge for us defensively," he said. "The urgency was fine and some of the adjustments we've been working at and focusing on defensively have been there.

"While our attention has gone there, we've gotten away from some of the things offensively we focused on in the early going and that has caused us to revert back to some things we don't necessarily like. We'll have to try to fix that."

After the Avalanche went up 2-1, Toronto pushed as the third wore on and pressed late, but couldn't get anything past Grubauer before Donskoi iced it into an empty net.

"One of the most complete games we've played," said Grubauer, who was pulled after allowing four goals on 15 shots against the Leafs in Colorado on Nov. 23. "We protected the middle."

Wednesday marked the return to Scotiabank Arena of Nazem Kadri. The Avalanche centre was traded by Toronto to Colorado on July 1 in the deal that saw defenceman Tyson Barrie and forward Alexander Kerfoot go the other way.

The seventh pick in the 2009 NHL draft, Kadri registered 161 goals and 357 points in 561 games with the Leafs, who paid tribute to their former player with a video montage during the first television timeout.

"I came close to shedding a tear," Kadri said. "I'm forever thankful for the fans embracing me and treating me so well."

After Andersen made a couple big saves early in the second, Colorado opened the scoring at 10:52 on the first power play of the night when Mikko Rantanen snapped a cross-ice pass to MacKinnon, who had all day to pick the top corner for his 18th.

Tied for third in NHL scoring with 44 points, the Colorado centre has goals in five straight games, and 12 points over that span.

Toronto responded just 1:50 later when Kerfoot found Hyman in front with a no-look feed to redirect home his third, but that and Andersen's stellar performance would end up being for naught after Nichushkin pounced on that horrendous miscue in the third.

"There's urgency in our group," Spezza said. "We know we're going through growing pains of learning a new system, but we also need results. Freddie showed a lot about his character, coming out and playing like that.

"It just makes the loss even harder."

Notes: Rielly played his 500th game. ... Toronto winger Andreas Johnsson left with a leg injury after blocking a shot in the second. ... The Leafs open a four-game road trip Saturday in St. Louis before heading to Vancouver, Calgary and Edmonton. ... The Avalanche visit Montreal on Thursday. Head coach Jared Bednar said Colorado captain Gabriel Landeskog, who's been out injured since Oct. 26, could return against the Canadiens.