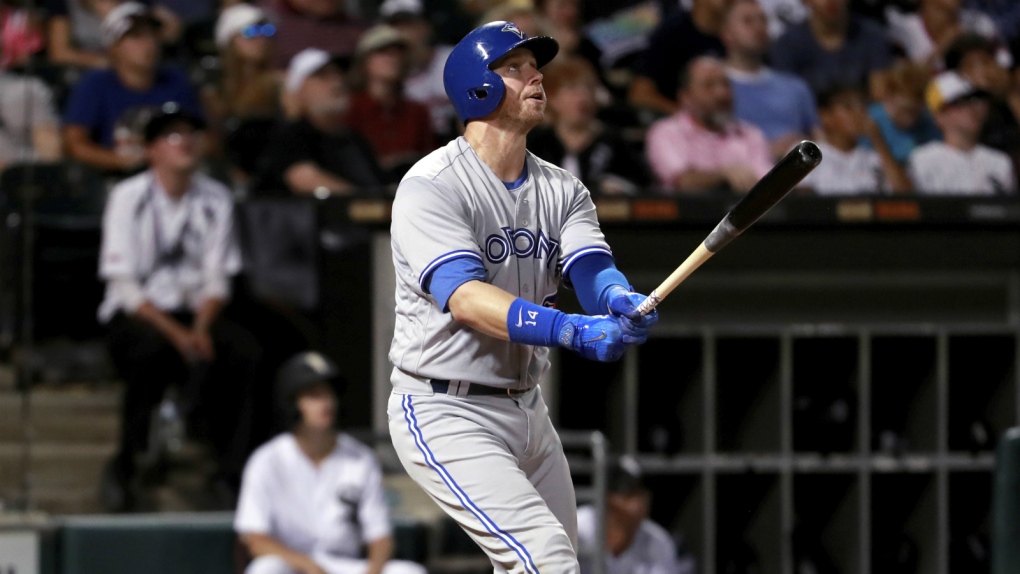 Smoak and Donaldson each connected for the second straight night and third time in five games. Donaldson also had a sacrifice fly and RBI double.

Marcus Stroman (10-5) went seven innings, allowing four runs and seven hits. He was winless in his previous three starts despite a 1.89 ERA in that stretch.

Toronto came out on top after dropping three of four and snapped a four-game road losing streak.

Chicago's Kevan Smith hit a two-run homer batting for injured designated hitter Matt Davidson in the sixth. But the White Sox lost for the 18th time in 22 games.

BOSTON - Christian Vazquez hit a three-run homer with two outs in the bottom of the ninth inning and the Boston Red Sox pulled off the final rally of a wild game Tuesday night, beating the Cleveland Indians 12-10 despite an astonishing catch by centre fielder Austin Jackson.

In the fifth inning, Jackson robbed Hanley Ramirez of a leadoff homer with a leaping grab in the right-centre triangle at Fenway Park. Jackson reached way above the wall and tumbled head over heels into the Red Sox bullpen, steadying himself by holding onto the fence with his right arm. Following a soft landing, Jackson stood up and showed umpires he indeed had the ball, to the amazement of players on both sides.

A replay review confirmed Jackson held on for the catch.

Cleveland, which tied it on Fancisco Lindor's leadoff homer in the top of the ninth and added a run on a wild pitch, blew the lead for the third and last time in the bottom of the ninth in a game the Indians led 5-0 after two innings.

The slumping Braves were shut down by Maeda (10-4) but cut their deficit to one with Johan Camargo's two-run homer off Josh Ravin in the eighth. Atlanta ended the inning with Brandon Phillips, who had a pinch-hit single, on third base.

Bellinger led off the fourth with his 29th homer into the Braves' bullpen in right-centre off Lucas Sims (0-1).

Sims and second baseman Ozzie Albies made their major league debuts for Atlanta, which has lost six in a row.

Kenley Jansen struck out the side in the ninth for his 28th save in 29 chances.

HOUSTON - Evan Longoria became the second Tampa Bay player to hit for the cycle and drove in three runs to lead the Rays past Houston.

He was a double shy when he came to the plate with two outs in the ninth inning and laced a laser to left field. Longoria dashed to second base and slid in to avoid the tag of Jose Altuve.

He was initially ruled out, but the call was overturned after a crew chief review. Most of the Rays stood up behind the railing of the dugout and cheered as the call was reversed.

Lucas Duda singled with one out in the first before Longoria launched his towering homer, which banged on train tracks atop left field, off Mike Fiers (7-6) to make it 2-0. Morrison's 27th homer came next to make it 3-0.

Rays starter Chris Archer (8-6) allowed six hits, four runs and struck out five in 6-plus innings to get his first win since July 4.

NEW YORK - John Hicks hit a three-run homer in his first big league game in more than a month, Justin Upton added a solo drive off CC Sabathia, and Detroit held on to beat the New York Yankees.

A 27-year-old rookie recalled Monday for his fifth major league stint this season, Hicks drove a slider over the right-centre field wall in the second inning, capping a 10-pitch at-bat.

Upton made it 4-0 in the third when he hit a full-count slider to left-centre for his 18th homer.

Shane Greene walked pinch-hitter Jacoby Ellsbury with two outs in the ninth, and bounced a pickoff throw for an error that allowed Ellsbury to reach third. Brett Gardner was intentionally walked and stole second, and rookie Clint Frazier popped out.

MILWAUKEE - Jimmy Nelson finally beat St. Louis with six strong innings, and the Milwaukee Brewers held on for a 3-2 victory over the Cardinals on Tuesday night.

Nelson (9-5) entered 0-8 with a 7.01 ERA in 11 appearances (10 starts) against the Cardinals. This time, the right-hander overcame his division rival by allowing just two runs on six hits with seven strikeouts.

The Brewers' bullpen kept the Cardinals off the scoreboard for three innings, including Anthony Swarzak striking out the side in the eighth after Josh Hader issued a leadoff walk. Corey Knebel then earned his 19th save.

The Brewers scored their three runs in the first inning off Cardinals starter Carlos Martinez (7-9) and had just two infield singles the rest of the game.

MIAMI - Max Scherzer hit his first career homer to help build a six-run lead, but he pitched only one inning before departing with a neck spasm, and Miami rallied to beat Washington.

Scherzer slept funny and left the game as a precaution, the Nationals said.

Brad Ziegler, promoted to closer after A.J. Ramos was traded last week, pitched the ninth and worked around a pair of two-out singles for his 86th career save and first this year. Ryan Zimmerman grounded out to end the game.

DENVER - Nolan Arenado hit a three-run homer in the sixth inning and a game-winning single in the bottom of the ninth that lifted Colorado past the New York Mets.

Charlie Blackmon crashed into the centre-field fence for an outstanding catch that ended the top of the ninth. In the bottom half, the Rockies took advantage of a misplay by new Mets shortstop Amed Rosario, a touted prospect making his major league debut.

Blackmon drew a leadoff walk from Hansel Robles (6-2) and DJ LeMahieu followed with an infield single off the glove of Rosario, unable to make the backhand play after initially breaking toward second base with Blackmon running on the pitch.

Arenado reached out and looped a single to centre that scored Blackmon.

SAN DIEGO - Austin Hedges hit a two-run home run in the eighth inning and Jhoulys Chacin combined with two relievers on a three-hitter for San Diego.

The Padres had only two hits and led 1-0 going into the eighth before Hunter Renfroe singled off Alan Busenitz with one out and Hedges homered to right-centre, his 14th.

Jose Berrios (9-5) held the Padres hitless until Renfroe opened the sixth by beating out an infield single to third base. Hedges followed with a double to right and Manuel Margot hit a sacrifice fly with one out. Hedges was thrown out trying to take third.

Berrios had faced the minimum 15 batters until the sixth. He issued a one-out walk to Carlos Asuaje in the first before Jose Pirela hit into a double play.

Seth Smith drove in three runs to help the Orioles move within two games of .500 (52-54) for the first time since July 3.

Kansas City will seek to avoid a three-game sweep on Wednesday. The Royals came to town having won 10 of 11, but they've only scored three runs in these two games at Camden Yards.

Bundy (10-8) struck out five and walked one. The right-hander had not pitched more than seven innings in any of his previous 34 major league starts.

All three hits Bundy allowed were singles - none after the third inning - and he retired the final 13 batters he faced. The only run he allowed was unearned.

Hamilton tripled and scored in the first inning. Then he sent a pitch from Jameson Taillon (6-5) into the right-field seats in the second for his third home run of the season as the last-place Reds beat Pittsburgh again.

Cincinnati is 7-1 against the Pirates this season and 36-62 versus everyone else. Homer Bailey (3-5) allowed one run in six innings, striking out three and walking two to snap a three-start losing streak.

CHICAGO - Jon Lester hit his first major league homer and struck out nine to reach 2,000 for his career, helping the Cubs cruise past Arizona.

Anthony Rizzo went deep twice and Ian Happ and Javier Baez also connected as Chicago kicked off a six-game homestand with its 14th win in 17 games since the All-Star break. Rizzo, Baez and Albert Almora Jr. each drove in three runs, and Kris Bryant and Willson Contreras had two RBIs apiece.

The NL Central leaders rapped out 17 hits in their highest-scoring game of the season and stayed 2 1/2 games ahead of second-place Milwaukee.

With two outs and Happ on first in the third, Lester drove a 2-2 pitch from Patrick Corbin (8-10) over the wall in centre to make it 8-1. The crowd of 40,709 roared as Lester trotted around the bases and kept cheering until he popped out of the dugout for a curtain call

Hector Rondon (3-1) got five outs for the win and Mike Montgomery pitched three innings for his third save.

Cano's two-run double in the sixth was the 499th of his career, moving him into a time with Rusty Staub for 63rd in MLB history.

Jarrod Dyson had his 200th career steal in the win and threw out a runner from centerfield at third to end the eighth inning in a one-run game. Nelson Cruz homered and Leonys Martin had two hits and two RBIs for Seattle.

Joey Gallo had two homers and four RBIs, and Rougned Odor also went deep for the Rangers, who lost their fourth straight.

Casey Lawrence (1-3) picked up his first MLB win after after entering the game in the fourth inning. Edwin Diaz earned his 21st save after working a 1-2-3 ninth.

OAKLAND, Calif. - Hunter Pence hit a three-run homer and Nick Hundley added a two-run shot to back a stellar start by Jeff Samardzija and lead San Francisco past Oakland.

Brandon Belt homered leading off the fourth inning to help the Giants snap a four-game losing streak. San Francisco's five runs in the first matched its most in any inning this year, and the three homers also equaled a season high.

Samardzija (6-11) struck out five over eight innings to win consecutive outings for the second time this year.

Matt Joyce hit a two-run homer and a sacrifice fly for the A's.

Sean Manaea (8-6) gave up nine hits and six runs - two earned. He was done after three innings for the second-shortest outing of his career.

Pujols followed up his go-ahead double off Aaron Nola (8-7) in the fifth inning with his 608th career homer in the seventh off reliever Mark Leiter. The slugger's third homer in two games left him one behind Sammy Sosa for eighth place in major league history.

Pujols went 3 for 4 in his 23rd career game with at least five RBIs. That's the 11th-most in history, tied with Barry Bonds and Cecil Fielder.

The Phillies failed to match their longest winning streak of the season in the opener of an eight-game road trip.