Tennis in Canada has never looked better after our athletes’ recent success at the Rogers Cup, says Milos Raonic's former coach, just a day after the young player lost in the final round of the country’s biggest tournament.

Tennis coach Casey Curtis says those at the top of Canadian tennis have done a lot recently to grow the sport and the future looks bright.

"Canadian tennis looks real good right now, there are a lot of things that are going right for us," Curtis told Canada AM. "The players are obviously getting better, the coaches have improved their coaching and Tennis Canada's done a great job building the game."

Curtis points a desire to "get serious" about tennis in Canada and to the construction of the National Tennis Centre in Montreal – now in its seventh year -- as a keys to Canadian success.

On Sunday, Raonic lost in the finals of the Rogers Cup to Spain’s Rafael Nadal. But despite the loss, the tournament was a huge win for Raonic and tennis in Canada.

The Thornhill, Ont., native’s appearance in the finals ended a 55-year run of Canadians being left out of the country’s biggest tennis tournament.

"Not exactly the result we wanted, but Rafael is just playing so well right now, and Milos didn't serve quite as well as he sometimes does," Curtis said.

Raonic was ranked 13th prior to the Rogers Cup but will now break into the Top 10 -- a first for any Canadian. At 22, he will also be the youngest player in the Top 10 rankings worldwide.

Raonic made it to the final match after beating fellow Canadian Vasek Pospisil, of Vernon, B.C. It was the first time two Canadians were in the semi-finals of an ATP event since 1990.

"(Raonic) is very very intelligent, very well-spoken and well-respected on the tour. We've had a lot of other great players before; we have Daniel Nestor who is also a great ambassador, but for singles right now, Milos is definitely leading the way," Curtis said.

Nestor, who specializes in doubles play, made it to the semi-final match at the Rogers Cup along with his tennis partner, Swede Robert Lindstedt. The duo lost to Great Britain's Andy Murray and Colin Fleming.

And an all-Canadian women's team also made it to the women's semi-final match. Gabriela Dabrowski and Sharon Fichman battled their way into a semi-final match after an underdog win over the top-seeded Italian team.

The last Canadian to make it to the finals of the Rogers Cup -- previously called the Canadian Open -- was Montreal’s Mike Belkin in 1969. 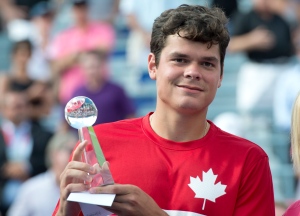