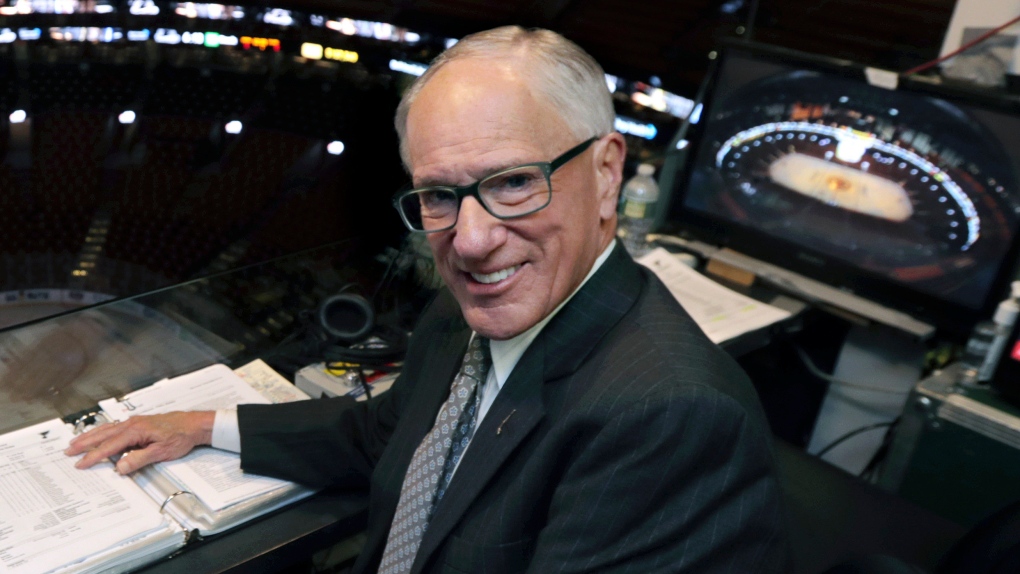 In this Wednesday, May 29, 2019, file photo, NBC hockey broadcaster Mike Emrick poses for a photo while preparing to call Game 2 of the NHL hockey Stanley Cup Final between the St. Louis Blues and the Boston Bruins, in Boston. (AP Photo/Charles Krupa, File)

Thinking back over 50 years in hockey, Mike Emrick can't name one favourite memory or game, but one story sticks out.

Minutes after watching T.J. Oshie score four shootout goals to help the U.S. beat Russia at the Sochi Olympics, the camera panned to dejected fans and Emrick echoed 1980 gold medal-winning coach Herb Brooks with his call: "They paid their rubles to see the home team win. But not this game. Not tonight."

Emrick called more than 3,700 games but is done adding game days to his calendar for the first time since 1970. The Hall of Fame broadcaster who made hockey sound like art as the voice of the NHL in the United States announced his retirement Monday to a chorus of tears and admiration from all corners of the sports world.

The man affectionately known as "Doc" for his doctorate in communications spent the past 15 years as the voice of the NHL in the U.S. Emrick, 74, called 22 Stanley Cup Finals and six Olympics since working his way up from the minors in the 1970s and did the most recent NHL playoffs remotely from his home in Michigan with his wife, Joyce, and dogs nearby.

"As time passed, I became more comfortable with myself and the fact that I was flawed and there was no way I was ever going to do a perfect game and probably the mistake was to try to do it that way," Emrick said. "I just enjoyed the fact that I was given a free seat, a good seat, and I got to work with some of the best athletes in the world and then twice a month I got something in the mail, and it was really good."

Emrick worked the past 15 years as NBC Sports' lead play-by-play voice. Called "hockey's Vin Scully" by fellow broadcaster and likely successor Kenny Albert, Emrick was honoured by the Hockey Hall of Fame in 2008 and in 2011 was the first announcer inducted into the U.S. Hockey Hall of Fame.

During the 2019 Stanley Cup Final, Emrick said he wanted to do his job from the first time he saw a hockey game. He got his first taste in Pittsburgh during the 1970-71 season as a freelance reporter for the Beaver County Times, earned a Ph.D. in broadcast communications from Bowling Green a few years later and progressed through the minors before reaching the NHL.

Emrick has spent the past four decades as a beloved part of the hockey community -- a rapid-fire storyteller known to viewers for his countless verbs to describe the puck moving around a rink and to friends and colleagues for his warmth and personal attention to the sport and the people in it. He said he always obliges a conversation, photo or autograph request because, "I'll miss it when it doesn't happen."

Emrick said "it seemed like it was time" to step away from full-time broadcasting to enjoy more time with his family while in his mid-70s. He said 100% of his proceeds from a book about his life and career coming out Tuesday will go to hands-on care of animals.

Flood described his two times crying in the past 12 hours, Olczyk fought through tears to talk about someone who helped him through his bout with cancer, Michaels asked for Emrick's "unused verbs," Bettman called him a "treasure" and Lamoriello summed it up by saying, "There's no one better."

"You have been simply magnificent at your craft," Bettman said. "There's nobody who does a play-by-play as well as you do. I just want to thank you for all of the incredible energy and effort you've given us and our fans."

Olczyk said: "We all thank you, Doc, for your passion, your love for the game, your appreciation and love for people. ... We're all much better for having you in our lives."

Life was always more valuable than hockey to Emrick, who skipped the 2002 Olympics because one of his dogs was sick. That's why the shootout game in Sochi meant so much after a conversation with Oshie months later when he asked if it was the most significant thing to happen to him.

"And he said: `No, shortly after I got back, I witnessed the birth of my first child. That was awesome,"' Emrick said. "That's what I recall and that's one thing that comes to mind now."