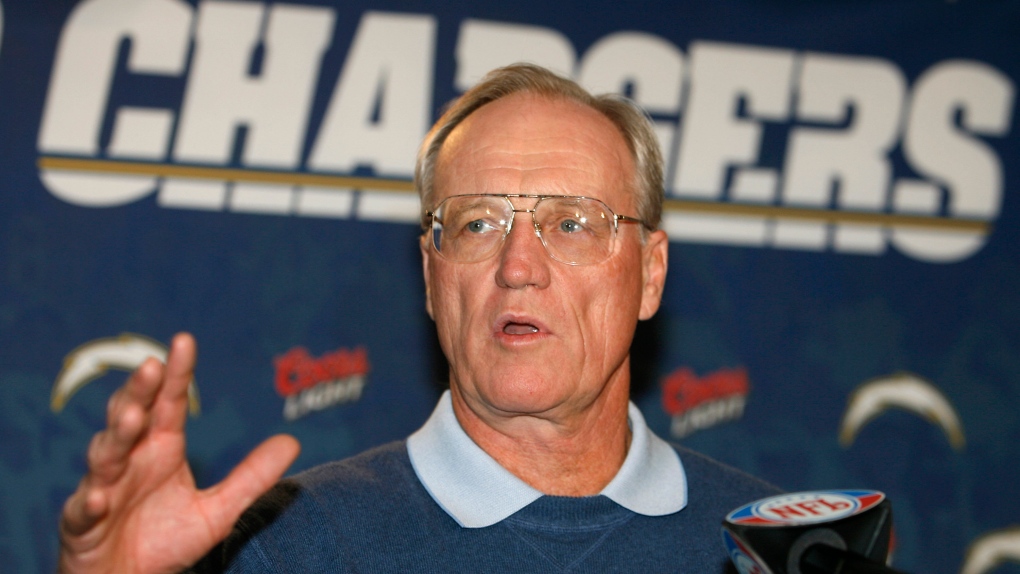 Marty Schottenheimer's NFL coaching career was as remarkable as it was flummoxing.

There were 200 regular-season wins, the eighth most in NFL history. There were a mystifying number of playoff losses, some so epic they had nicknames: “The Drive” and “The Fumble.”

Always there was “Martyball,” the conservative, smash-mouth approach that featured a strong running game and hard-nosed defence.

Schottenheimer died Monday night in Charlotte, North Carolina, his family said through former Kansas City Chiefs publicist Bob Moore. He was 77. Schottenheimer was diagnosed with Alzheimer's in 2014 and moved to a hospice Jan. 30.

“The best coach I ever had,” Hall of Fame running back LaDainian Tomlinson said in a statement. “I never went into a game with Marty as coach feeling like I wasn't fully prepared to win. ... I considered him a true All-American man.”

Former coach Bill Cowher remembered his former coach and mentor as an "amazing coach, teacher and leader. Marty, you say, “There's a gleam, men,” there is and it was always “YOU.”

Schottenheimer was a master at getting his players' rapt attention. He would gather them in the pre-game huddle and holler, “One play at a time!” Among his other favourites: “This is us!” and “We've got our people!” Or, “Gentlemen, it's the 6 inches between your breastbone and your back - your heart!”

Then there was “Raider Week,” when he'd warn his players in no uncertain terms what nastiness awaited them if they didn't play well against their archrival. Under his “Midnight Rule,” players and coaches could celebrate victories until midnight on Sundays, and then start focusing on the next week's opponent.

Winning in the regular season was never a problem. Schottenheimer's teams won 10 or more games 11 times, including a glistening 14-2 record with the Chargers in 2006 that earned them the AFC's No. 1 seed in the playoffs.

It's what happened in January that haunted Schottenheimer, who was just 5-13 in the post-season.

?Well, we haven't been real successful when we got there. We need to fix that,” Schottenheimer said in 2006 after San Diego clinched the AFC West.

His playoff demons followed him to the end of his career.

In his final game, on Jan. 14, 2007, Schottenheimer's Chargers, featuring NFL MVP Tomlinson and a supporting cast of Pro Bowlers, imploded with mind-numbing mistakes and lost a home divisional playoff game to Tom Brady and the New England Patriots, 24-21.

A month later, owner Dean Spanos stunned the NFL when he fired Schottenheimer because of a personality clash between the coach and strong-willed general manager A.J. Smith. Schottenheimer and Smith hadn't spoken for about two years.

A breaking point for Spanos -- head of the family-owned team -- came when Schottenheimer wanted to hire brother Kurt as defensive co-ordinator after Wade Phillips was hired away as Dallas' head coach. Kurt Schottenheimer had been on his brother's previous staffs, and Marty Schottenheimer's son, Brian, had been Chargers quarterbacks coach from 2002-05.

Schottenheimer then moved to North Carolina to spend time with his family and golf.

Spanos on Tuesday recalled Schottenheimer as a ”tremendous leader of men and a man of great principle. ... You couldn't outwork him. You couldn't outprepare him. And you certainly always knew exactly where you stood with him.“

Chiefs chairman and CEO Clark Hunt called Schottenheimer a “passionate leader who cared deeply for his players and coaches, and his influence on the game can still be seen today on a number of coaching staffs around the league.”

He turned around the Browns, Chiefs and Chargers.

The Browns on Tuesday recalled the coach's “tough, hard-nosed, never give up the fight attitude the team embodied that endeared him to Browns fans.”

When Schottenheimer was hired by the Chiefs in 1989, the Raiders had won 21 of the previous 30 games between the teams. During the next 10 seasons, Schottenheimer emphasized “Raider Week” and his Chiefs went 18-3 against the Silver and Black, including a win in the 1991 wild-card round, the first post-season game ever played at Arrowhead Stadium.

Tomlinson remembered how much Schottenheimer loved the running game.

Schottenheimer never made it to the Super Bowl, either as a player or coach. He was a backup linebacker for the Buffalo Bills when they lost the 1966 AFL title game to Kansas City, which then played the Green Bay Packers in the first Super Bowl.

As a coach, his playoff losses were epic and mystifying.

His Browns twice came tantalizingly close to earning Super Bowl berths, only to have them ripped away by “The Drive” and “The Fumble” in consecutive AFC title games against nemesis John Elway and the Broncos.

In the 1986 AFC championship game at Cleveland, Elway led the Broncos 98 yards in 15 plays to tie the game on a 5-yard pass to Mark Jackson with 37 seconds left in regulation. Denver won in overtime on Rich Karlis' 33-yard field goal.

A year later, with the Browns trailing the Broncos 38-31 with 1:12 left at Denver, Earnest Byner fumbled on the Broncos' 1-yard line. The Broncos won 38-33 after taking an intentional safety.

Schottenheimer's Chiefs reached the AFC title game in 1993 but lost at Buffalo. Two of his Chiefs teams went 13-3 and locked up home-field advantage throughout the playoffs before shockingly flaming out in the divisional round.

The Chargers thought they had a Super Bowl-caliber team in 2006, but Schottenheimer's career ended with a brutal playoff loss to the Patriots. In the first quarter, Schottenheimer insisted on going for it on fourth-and-11 from the Patriots' 30-yard line. Mike Vrabel strip-sacked Philip Rivers and New England recovered.

The biggest pratfall, though, and one that still haunts Chargers fans, came with San Diego leading 21-13 with just more than six minutes to play. Marlon McCree intercepted Tom Brady and instead of going to the ground, tried to run and was hit and fumbled, with the Patriots recovering. New England rallied for the win.

Schottenheimer seemingly survived another playoff failure, only to be fired a month later.

After winning just 12 games in Schottenheimer's first two seasons, the Chargers went 12-4 in 2004 behind Tomlinson and a rejuvenated Drew Brees to end an eight-year playoff drought.

But they lost a home divisional game to the New York Jets in overtime. Schottenheimer, named The Associated Press Coach of the Year earlier that day, was whistled for an unsportsmanlike conduct penalty for running onto the field to argue with the referees in the second quarter.

In overtime, the Chargers had a first down at the Jets' 22, but Schottenheimer went conservative and called three straight runs up the middle by Tomlinson to set up a 40-yard field goal attempt by Nate Kaeding, who missed. The Jets then moved down the field for the winning field goal.

Schottenheimer was born on Sept. 23, 1943, in Canonsburg, a small town outside Pittsburgh. He played at Pitt before a six-year pro career as a linebacker with the Bills and Patriots.

He is survived by his wife, Pat, and children Brian and Kristin. Brian Schottenheimer was fired as Seattle's offensive co-ordinator last month and then hired by new Jacksonville coach Urban Meyer as passing game co-ordinator-quarterbacks coach.