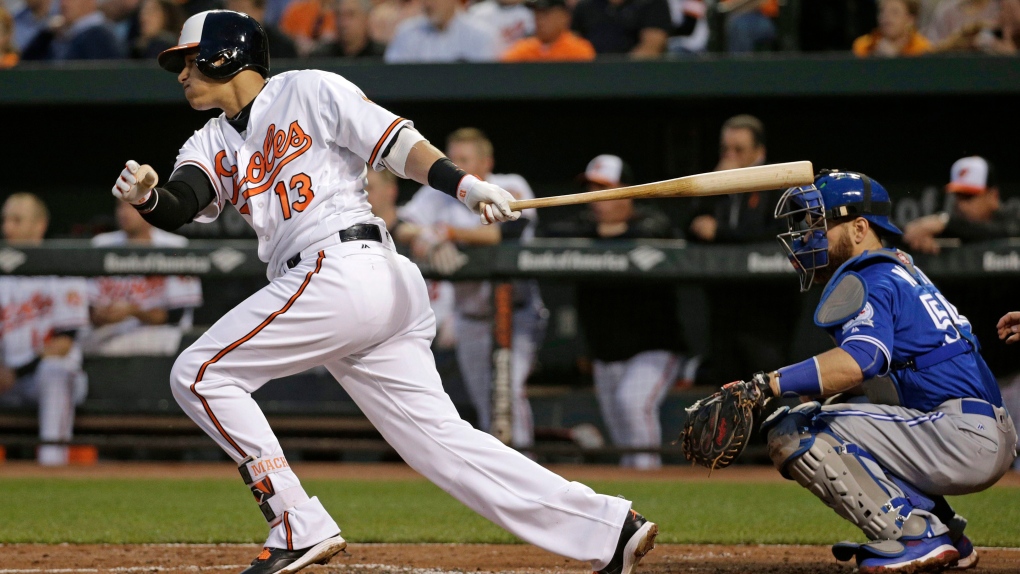 BALTIMORE - The Toronto Blue Jays sent eight players to the plate in the first inning, scored two runs and seemingly took control of the game.

Unlike last year, however, the Blue Jays failed to build on the advantage and the Baltimore Orioles rallied for a 3-2 victory Thursday night.

In winning the AL East last season, Toronto hit plenty of homers and scored runs in bunches. That formula has not been utilized this year, which goes a long way toward explaining why the Blue Jays (8-9) are struggling.

"That is what has been missing, the knockout blow early, which we had so many times last year," manager John Gibbons said. "But last year is over with. We've been looking for a couple of big innings early on to give us a little breathing room, but it was one of those types of games."

Toronto got all its runs and half its four hits in the first inning.

"We haven't been very good in tight games," Gibbons said. "We're not a team that manufactures a lot of runs. That's not our style. It's really not how we're built."

After Josh Donaldson doubled in a run and Justin Smoak drew a bases loaded walk against Chris Tillman in the first inning, the Orioles got a run in their half off Marco Estrada.

Neither team scored again until Baltimore pulled even in the seventh, then pushed across the game-winner in the eighth.

Rookie Joey Rickard singled off Brett Cecil (0-3) with one out and moved up on a passed ball by Russell Martin. Machado then hit an opposite-field fly to right that dropped between two fielders, scoring Rickard with an unearned run.

Darren O'Day (1-0) got three straight outs in the eighth and Zach Britton worked the ninth for his fourth save.

Home plate umpire Dan Bellino received hard stares after a few of his third-strike calls. Orioles catcher Matt Wieters evidently got a bit too vocal in the fifth inning after his check swing was ruled to be strike three. Bellino ejected Wieters, a ruling that brought manager Buck Showalter from the dugout for a lengthy argument.

"There was a lot of frustration built over the game about the strike zone," Showalter said.

Estrada struck out nine over five innings. The right-hander gave up one run, six hits and four walks.

"Right now, it's just not happening," Estrada said. "Once we get this train moving, we're going to be a very dangerous team."

Blue Jays: Jose Bautista drew an eighth-inning walk to extend his streak of games reaching safely to 30, including all 16 this season.

Rickard was credited with a first-inning single when his hot grounder to third base literally sliced through the webbing of Donaldson's glove. In the third inning, Donaldson and his new glove went into the stands in pursuit of a foul ball. He had it briefly but lost the handle while tumbling over the seats.

Blue Jays: Reliever Jesse Chavez missed a third straight game with a sore back. Gibbons said "it shouldn't be much longer" before the right-hander returns. ... Gibbons said LHP Aaron Loup (elbow) is "making progress" in his rehab, but there is no target date for his return.

Blue Jays: Aaron Sanchez (1-0, 1.35 ERA) makes his fourth start of the season Friday night in the opener of a three-game series against visiting Oakland.