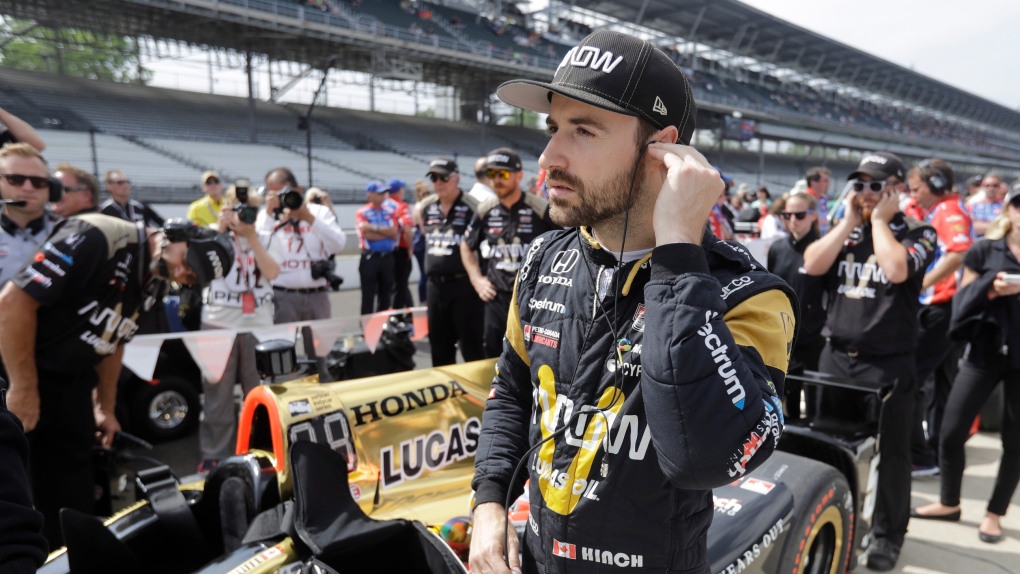 FILE - In this May 20, 2017, file photo, James Hinchcliffe, of Canada, waits for the start of qualifications for the Indianapolis 500 IndyCar auto race at Indianapolis Motor Speedway in Indianapolis. (AP Photo/Darron Cummings, File)

He strolled through the speedway's famed Gasoline Alley plotting his next move, constantly answering questions about a botched qualifying weekend that kept him out of the season's biggest race. He flew to New York to recount the miscues all over again and then wound up watching most of the Indianapolis 500 from an air-conditioned garage.

It was hard to accept then and it's not any easier now, as the popular Canadian driver returns to the speedway almost exactly one year after getting left out.

"Qualifying for a 500-mile race isn't the most important thing but, obviously, you have to make the show," he said Thursday with a chuckle. "You just don't know what's going to happen and we (the team) appreciate that better than most."

The fate of Hinchcliffe, a national spokesman for IndyCar engine manufacturer Honda, jump-started an immediate debate over the tradition of bumping at Indianapolis.

Some contend series' regulars like Hinchcliffe should be guaranteed a starting spot, a format previously used during the Indy Racing League's fledgling years.

Hinchcliffe disagrees. He argues the 500 is so unique that normal rules should not apply and perhaps points shouldn't even be awarded for the race.

Instead, Hinchcliffe and his Arrow Schmidt Peterson Motorsports team went back to work, reassessing what went wrong, what needed to change. They are coming back this year with what they believe will be a stronger plan.

"We took the time we needed as a team to look internally at what we could have done differently," he said. "A lot of it was procedural stuff, we moved personnel around, in preparing our cars and tires and everything for qualifying and then just the year-to-year stuff that every team does to make the car go faster during the off-season."

But if Hinchcliffe has learned anything about this historic oval over the past eight years, it's that little goes according to the script.

The lucky ones sip milk and rewrite history.

Just about everyone else recounts their struggles with phrases that sound like chapter titles: The Curse, Close Calls, Bad Luck or Contested Finishes.

Nobody, not even the most successful team in Indy history, is immune from trouble. Roger Penske still says the memory of leaving the track after qualifying in 1995, with defending champion Al Unser Jr. and 1993 Indy winner Emerson Fittipaldi, remains one of his most vivid memories.

Hinchcliffe already had one such moment when a mechanical failure sent him into a concrete wall during Indy practice in 2015. A broken piece punctured the car's protective tub, piercing Hinchcliffe's left upper thigh and damaging an artery that caused life-threatening bleeding. It took 22 units of blood and surgery to save Hinchcliffe's life.

He didn't race again until 2016, when he earned seven top-10 starts in the first eight races and won his only career pole at the 500 where he also promoted a blood-donor drive and finished seventh in the race.

When some fans began complaining about other drivers preventing Hinchcliffe from making the 33-car starting grid, he quickly turned the focus to himself, his team and a car that never seemed completely right. When others suggested he try to buy his way back into the race, Hinchcliffe balked. And then after sitting out, he jumped back into the No. 5 car, finished fourth two weeks later in Texas and made it back to victory lane at Iowa in early July.

And now, Hinchcliffe hopes to build off his early season successes. He has finished sixth twice and has three top-10 finishes in the first four races. He's seventh in points and seems to be well-positioned for another compelling comeback bid.

The journey back begins Friday and Saturday with the IndyCar Grand Prix on the speedway's 14-turn, 2.429-mile road course. But everyone will be watching Hinchcliffe on qualifying weekend, May 18-19, when he tries to make it through a revised qualifying format that gives the last three starters two chances to make the race.

"For us, it's a very distant memory, but I understand given what happened and how it happened, it's going to be a topic of discussion," he said. "But I hope, similar to 2016, we can leave here with a very different story for everyone to talk about when we come back here next year."