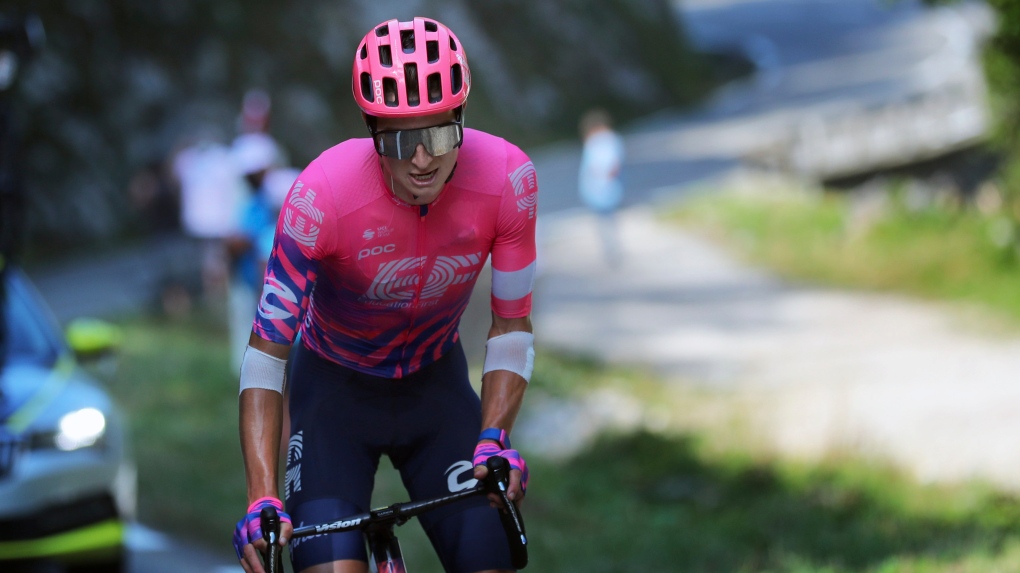 Neilson Powless of the U.S. rides during the 16th stage of the Tour de France cycling race over 164 kilometers from La Tour-du-Pin to Villard-de-Lans Tuesday, Sept. 15, 2020. (AP Photo/Thibault Camus)

LE PECQ, FRANCE -- A late draft to the Tour de France, Neilson Powless didn't have time to scramble together a turtle necklace, the spirit animal of his Native American tribe, or paint one of their wampum bead belts on the frame of the bike that he's ridden for three punishing weeks, over 3,300 kilometres (2,000 miles) of roads.

But although unable to carry the Oneida Tribe's symbols with him, the Tour rookie has become a powerful symbol himself as the first tribally recognized Native North American to have raced in the 117-year-old event.

Not only has Powless survived cycling's greatest and most grueling race, he distinguished himself in a crop of exciting young talents who helped set this Tour alight. Crossing the finish in Paris on Sunday will, he hopes, resonate on reservations back in the United States.

“My main hope is that I can be a positive role model for young indigenous kids who have a lot going against them,” Powless, who turned 24 during the race, told The Associated Press. “I think finishing the Tour de France is a testament to years of hard work and dedication to a lifelong dream. Hopefully I can help drive kids to setting their mind to a goal and going after it.”

“It must make it a lot easier when you can see somebody else who is doing it, or has done it,” he adds.

Word of Powless' feats in France has already filtered back to the Oneida Nation in Wisconsin. The tribal chairman, Tehassi Hill, says the cyclist is blazing “a trail of journey, hope and inspiration.”

“Whenever one of our own, from the Oneida community, are in the spotlight, it definitely does not go unnoticed. Neilson's journey and accomplishments I'm sure are spoken of at many gatherings here in Oneida,” Hill told the AP.

“Even during a pandemic, he did not falter or give up on his dreams,” the Oneida leader added. “This is an important message not only to our youth here in Oneida, but to everyone in our community.”

Powless traces his Oneida heritage back to his grandfather, Matthew Powless. The ex-U.S. Army paratrooper lived on the Stockbridge-Munsee Reservation in Wisconsin. He coached boxing and occasionally showed off his tribal smoke-dancing skills to his grandson. He died at age 80 in 2015.

“I saw him dance once or twice when I was younger, but I wish I could have watched him more,” says Powless, who grew up in Roseville, California. “He tried to get me into boxing for a few years and I would train at the gym he coached at sometimes when we would visit.”

The good news for American cycling is that Powless saw his future on a bike, instead. His main job at this Tour has been to ride in support of his team leader, veteran Colombian rider Rigoberto Uran. But Powless has also shown off his own strengths, particularly on arduous climbs. On Stage 6, his birthday, he was part of a small group that powered to the front of the race in a fight on the slopes of the Mont Aigoual, with stunning views across southern France. He placed fourth at the top.

“An amazing experience,” he says. “The win would have been nice.”

He distinguished himself again two days later, placing fifth on the brutal Stage 8 of climbing in the Pyrenees.

“This Tour will be a massive point of growth for him,” Jonathan Vaughters, his boss at the EF Pro Cycling team, told the AP. “Where that heads him is still unknown. But he certainly is coming out of the Tour a much better rider than he went in.”

The Tour confirms he is its first Native North American competitor. The cyclist hasn't made a fuss of his heritage. Vaughters says he only found out that Powless is one-quarter Oneida from the rider's dad just days before he took the Tour start on Aug. 29.

Still, when pressed, Powless proudly points out that he has a tribal ID recognizing him as one of the 16,500 Oneida members.

“The tribe has helped me financially with schooling. I have family on the reservation,” he says. “It's not that I just had a blood test one day and decided `Oh, I guess I'm Native American.' It is something I have, like, sort of grown up with and it has been part of my whole life and the tribe recognizes that as well.”

Told just days before the Tour that he was on the team, Powless says he didn't have time to discreetly decorate his bike or source a replacement for the turtle necklace he broke last year.

Still, based on his performances, he'll surely be back and able to fix that at future Tours.

“Normally I would have a painting of the Oneida bead belt, the wampum belt, somewhere on my bike, my garment, my shoe,” he said. “Just something really small, most people wouldn't even really see it. It's just something that I have always tried to keep close to me.”