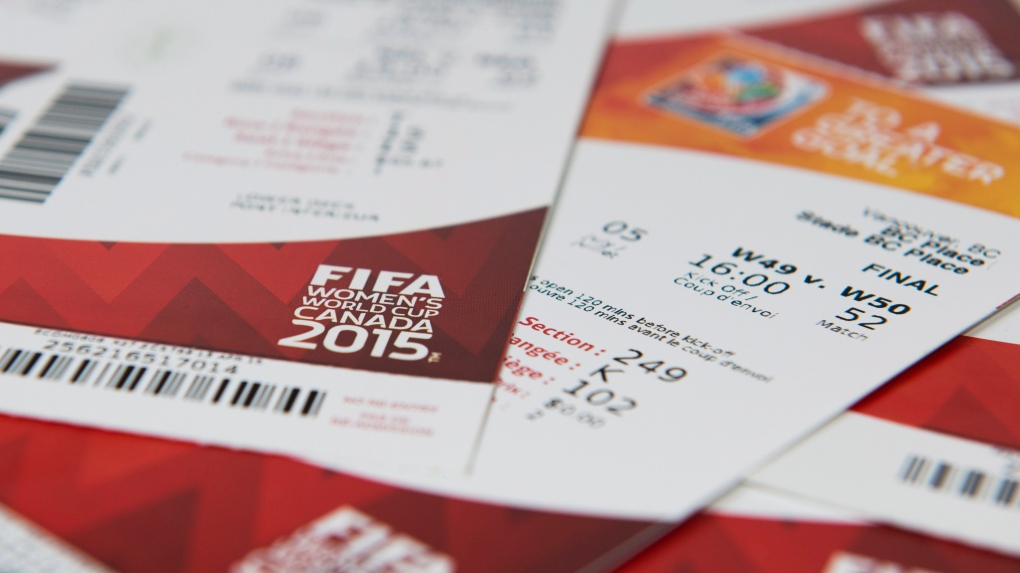 Tickets for the upcoming FIFA Women's World Cup to be played in Canada are shown Tuesday, May 19, 2015. (THE CANADIAN PRESS / Graeme Roy)

Swiss prosecutors opened criminal proceedings into FIFA's awarding of the 2018 and 2022 World Cups Wednesday. That came only hours after seven soccer officials were arrested pending extradition to the U.S. in a separate probe of corruption linked to commercial deals dating back to the 1990s for soccer tournaments.

News of the criminal investigation on both sides of the Atlantic comes 10 days before the Women's World Cup kicks off. The 24-team tournament runs though July 5 in Edmonton, Vancouver, Winnipeg, Ottawa, Montreal and Moncton.

The CSA, which doubles as the World Cup's national organizer, said in a statement that it was "extremely disappointed by today's developments and welcome and support all efforts to eliminate this type of behaviour in the sport."

The association said it was "committed to protecting the integrity of the game and upholding the values of transparency and inclusiveness on which our country prides itself."

"As the host nation for the FIFA Women's World Cup Canada 2015, the Canadian Soccer Association is confident that the current situation will not impact the competition," it added.

The CSA said it would make no further comment.

TSN, which has the broadcast rights for the women's tournament, said it is closely monitoring the investigation.

"We remain firmly focused on celebrating the FIFA Women's World Cup Canada 2015 -- putting a national spotlight on both the tournament and the incredible group of players on the Canadian women's national team," the network said in a statement.

CBC had the broadcast rights for the last major FIFA event, the 2014 World Cup in Brazil.

"While CBC no longer has the rights to any FIFA properties, none of our past negotiations with them involved any of the individuals who have been charged," CBC said in a statement.

Federal Sports Minister Bal Gosal, meanwhile, said he's confident that Canadian soccer authorities won't be pulled into the criminal investigations into FIFA executives and that the World Cup will be a success.

Gosal called the allegations terrible, but an internal matter for FIFA's executive.

He said Canada is a world leader in transparency in sport, pointing to the headquarters of the World Anti-Doping Association in Montreal.

"I'm very satisfied that Canada is very up front," he said. "We're looking forward to hosting the World Cup."

Players and coaches at the Toronto FC-Manchester City friendly Wednesday evening had little to say when asked about the FIFA scandal.

"The important thing I hope (is) that we will know all the truth about those things," said Manchester City manager Manuel Pellegrini.

Toronto FC coach Greg Vanney said he hadn't had time to get caught up on all the news.

"I don't have an opinion other than we'll see where this thing goes and hopefully the outcome is just, whatever that may mean in the grand scheme of things."