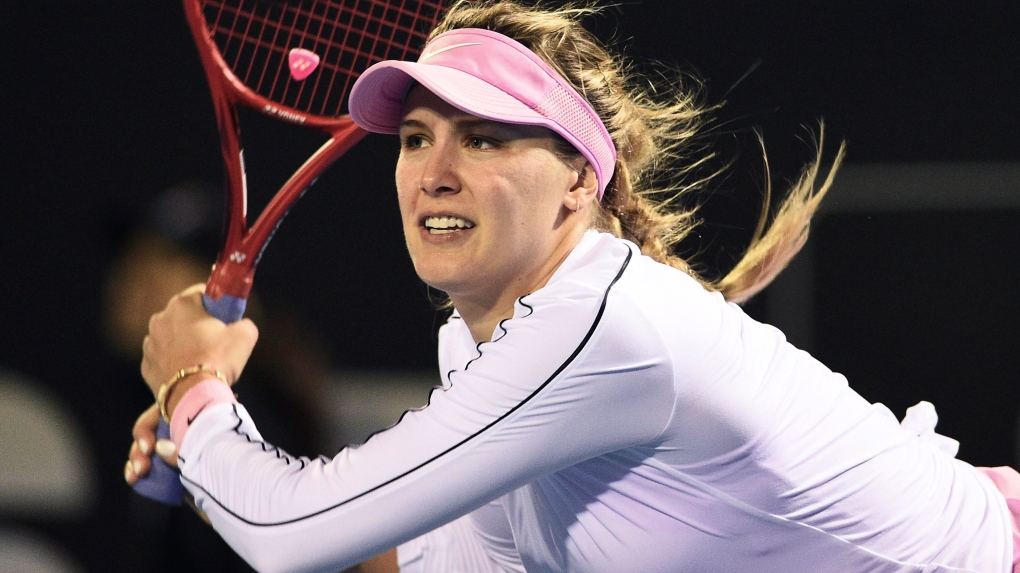 Canada's Eugenie Bouchard makes a return during her first round singles match against Belgium's Kirsten Flipkens at the ASB Classic in Auckland, New Zealand, Monday, Jan. 6, 2020. (Chris Symes/Photosport via AP)

AUCKLAND, NEW ZEALAND -- Canada's Eugenie Bouchard has been ousted in the quarterfinals of the ASB Classic for the second year in a row.

The 25-year-old Bouchard, from Westmount, Que., fell short of knocking off a seeded player (Anisimova is No. 25 in the world) for the second match in a row.

Bouchard, who lost 12 straight first-round matches at one point last year, is projected to rise to No. 211 in the rankings when they're released on Monday.

The Canadian has enjoyed success at the Auckland tournament in the past. Along with reaching the singles quarterfinals last year, Bouchard also captured the ASB Classic doubles title with American Sofia Kenin.

The two wins this week have marked Bouchard's first victories above a 125K event (the lowest level on the WTA Tour) since last February in Dubai.

Meanwhile, Serena Williams and Caroline Wozniacki both advanced to the singles semifinals, then extended their first-time partnership to reach the doubles final.

Both players will face American opponents in the semifinals on Saturday; Wozniacki will play Jessica Pegula and Williams will play Anisimova.

Williams and Wozniacki then combined to beat Kristen Flipkens and Alison van Uytvanck 7-6 (9), 6-2 to reach their first doubles final. The pair, close friends, are playing doubles together for the first time in their careers.

Wozniacki will retire after the Australian Open and, with Williams, snatched the last chance of their long careers to play doubles.

Friday's results raise the possibility the pair will meet in the singles final on Sunday, then will have to combine in the doubles final.

"I've done it before with my sister (Venus) and we're still really close so I'm sure me and Caroline will still be super close," Williams said.

Williams had to overcome a swirling wind on centre court to come from a break down in the second set to beat Siegemund. She was able to step up on crucial points, converting three of her five break points.

Siegemund, who beat American teenager Coco Gauff in the second round, stretched Williams with her variety and placement but couldn't match the 23-time Grand Slam champion's power from the baseline.

"She was an incredibly tricky player and the conditions really didn't help," Williams said. "But, oh my God, it's good to get through that."

Wozniacki was convincing in her win over Goerges, the 2018 and 2019 champion in Auckland. She dominated the game on serve and gave Goerges few chances to fight her way back into the match.

"I've had so many tough matches against Julia in the past and I knew this one was going to be tough as well," Wozniacki said. "I've been serving well this week so hopefully it can continue."

With files from The Associated Press. This report by The Canadian Press was first published Jan. 10, 2020.