Dodgers deliver with 2 outs, but let Game 4 slip away 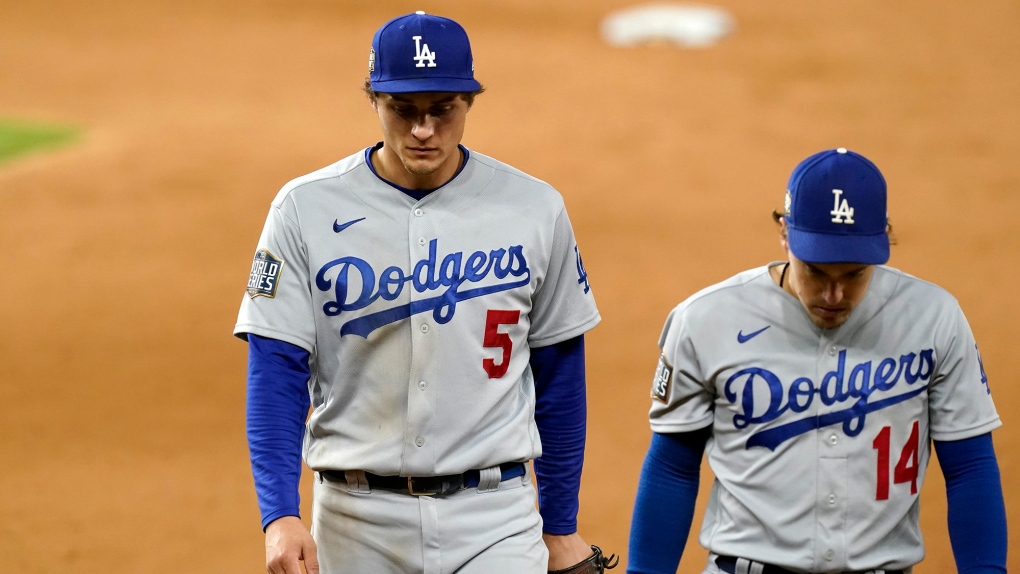 All the Dodgers' runs in Saturday night's wild 8-7 World Series loss to the Tampa Bay Rays crossed the plate with two outs, raising their total to 57 of 94 in the post-season. The 60.6% clip is on track for a post-season record, topping the previous high of 59.3% by the 1992 Atlanta Braves.

But for all their clutch hitting, the Dodgers couldn't make the last pitch they needed to close out Game 4.

Brett Phillips' two-out single in the bottom of the ninth inning off closer Kenley Jansen scored Kevin Kiermaier from second base with the tying run and brought home Randy Arozarena all the way from first when centre fielder Chris Taylor bobbled the ball for an error and Los Angeles botched a relay to the plate.

Before the astonishing finish, the teams became the first in Series play to score in eight consecutive half innings -- two more than the previous high set by the Dodgers and New York Yankees in Game 3 of 1947.

And a World Series devoid of lead changes for 32 innings suddenly fluctuated like seismic shocks on a graph.

All that two-out offence by the Dodgers had a lot to do with it.

Solo homers by Justin Turner in the first and Corey Seager in the third off Rays starter Ryan Yarbrough built a 2-0 lead.

Max Muncy's RBI single against Pete Fairbanks made it 3-1 in the fifth.

Kike Hernandez's run-scoring double against Diego Castillo gave the Dodgers a 4-2 lead in the sixth.

Joc Pederson's two-run single off Nick Anderson made it 6-5 in the seventh -- the Dodgers' first go-ahead pinch hit in the World Series since Kirk Gibson's ninth-inning homer off Hall of Fame closer Dennis Eckersley won the 1988 opener against Oakland.

Seager's tiebreaking single in the eighth, when he punched Nick Anderson's 95 mph fastball just over shortstop Willy Adames into short left field, put the Dodgers ahead 7-6 and made Seager and Turner only the fourth pair of teammates to both have four hits in a Series game.

Little did it accomplish in the end for the Dodgers as they chase a World Series title that's eluded them since 1988.