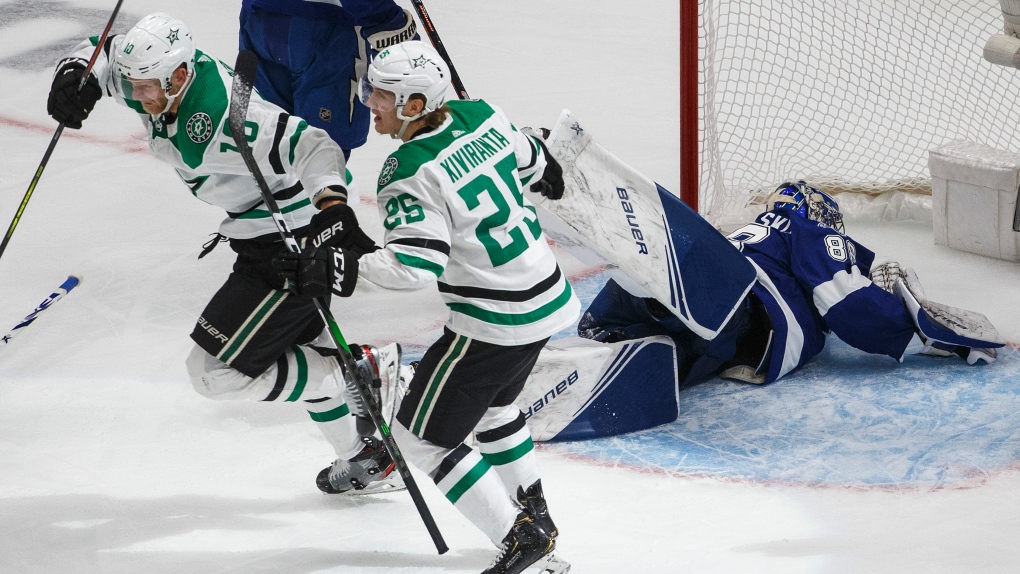 EDMONTON -- The Dallas Stars are still alive in the Stanley Cup final, led by two veterans who are simply refusing to let them lose.

Corey Perry, age 35, scored two goals, including the winner in double overtime, to give the Stars a 3-2 win Saturday over the Tampa Bay Lightning in the Stanley Cup final, forcing Game 6 Monday night.

Perry jammed the puck past Lightning goalie Andrei Vasilevskiy at the 9:23 mark of the second extra period -- but overtime only came after Stars centre Joe Pavelski, age 36, scored his team-leading 13th playoff goal late in the third period to tie the game at 2-2.

Both players were signed as free agents by Dallas general manager Jim Nill this past off-season to give the Dallas some extra offensive oomph and veteran leadership.

"I scored the winner but it could have been anybody," said Perry.

"I thought our team game was pretty good. We had a lot of guys, they're in the fight. That's what we're asking for."

The Stars looked finished in the first overtime, running around in their own end and getting outshot 7-2.

"(They're) guys that have been there that know how hard it is to get to these moments and don't want to have any regrets," said Seguin.

"The biggest switch for us tonight was those guys talking in the dressing room about having to go for this. We can't be sitting back and hoping to win.

"I think that's when you saw the change to the second overtime when we started going after them."

Dallas head coach Rick Bowness acknowledged that Perry is an uber-agitator that opponents love to hate.

"You love him on your team. I coached against him long enough and I know he's a pain in the butt, and that's where he is so effective," said Bowness.

"You can see his puck skills and you can see how competitive he is. You get him below the tops of the (face-off) circles around their net, he is one tough guy to handle."

Dallas goalie Anton Khudobin made 39 saves for his 14th win of the playoffs, just 20 hours after he faced 35 shots in a Game 4 loss to the Lightning.

Ondrej Palat, with his 11th goal of the post-season, and Mikhail Sergachev replied for Tampa Bay.

Vasilevskiy, also coming off a quick turnaround after Tampa's Game 4 overtime win, stopped 30 shots but took the loss and is now 17-7 in the post-season.

"It obviously not the outcome you want, but we knew it was going to be a hard series," said Tampa defenceman Victor Hedman.

"We had some good looks in overtime and throughout the game, but it wasn't our night."

Dallas opened and finished the scoring.

Perry made it 1-0 late in the first period, taking advantage when Sergachev was winded in a collision with Alexander Radulov.

Sergachev was doubled over and couldn't get off the ice, and Perry scooped up a loose puck in the slot and wristed it over Vasilevskiy's blocker-side shoulder.

Palat tied it less than five minutes into the second period, taking a dish pass from Nikita Kucherov, swooping around Dallas defender Esa Lindell, cutting across the front of the net and slipping the puck past Khudobin.

The Lightning took the lead early in the third when Sergachev fired a slapshot through traffic past Khudobin. Pavelski replied with less than seven minutes to go, burying the rebound off a Miro Heiskanen point shot.

Justin Dowling played in his first playoff game for Roope Hintz, who fell awkwardly into the boards in Game 4. The Stars were also without Radek Faksa and Blake Comeau, making it three of their key two-way forwards and penalty killers.

All games are being played in front of no spectators at Rogers Place. Players are also isolated between games to prevent contracting the coronavirus.

This report by The Canadian Press was first published Sept. 26, 2020.