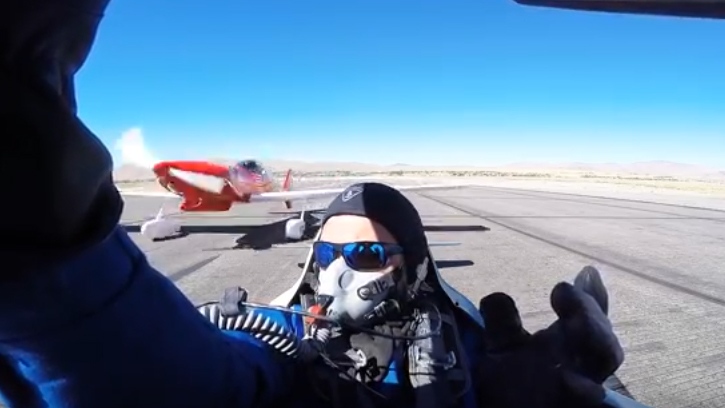 Pilot Thom Richard is seen in the cockpit moments before an incoming plane careened toward him, with its wing nearly missing Richard's head. (YouTube: Thom Richard)

An American pilot had a close shave with another aircraft at an air racing competition in Reno, Nev., last weekend after a plane careened towards his open cockpit with its incoming wing inches away from his head.

Pilot Thom Richard was competing at the National Championship Air Race on Sunday in his F1 Racer, dubbed “Hot Stuff,” when he realized his plane’s engine wasn’t running well enough to fly.

While on the tarmac, he signalled to a race official and opened his cockpit’s canopy to send the message to other planes that he was tapping out of the race.

But, somewhere in the communication, that message got lost. A flagman ran onto the runway waving his hands over his head as two planes fired by Richard’s plane on his right and left.

Warning: This video contains some profanity

“The impact was violent and loud,” Richard wrote in a description of the YouTube video. “The impact spun me around nearly 180º, like a teacup ride at warp eight.”

The force of the crash broke the landing gear “clean off the plane” and the other plane’s propeller cut deep gashes in Hot Stuff’s wing. But, aside from an injured right hand, Richard was fine. The other pilot also walked away unharmed.

Richard said his plane suffered “severe damage” but he isn’t angry about how things unfolded.

“I’m not the slightest bit upset over the accident. I, in fact, consider myself a very lucky man,” he wrote. “Another four feet to the left and I would have been minced meat. Literally dodging a bullet. A busted up hand is a small price to pay. I’ll take it. It’ll heal.”

The near miss hasn’t put a dent in Richard’s love for the sky. He said he intends to return to air racing.

“I choose to cross the street because the risk of crossing the street is worth the reward of getting to the other side. Same thing with air racing, I’ll be back. Of course there’ll be a review of procedures, how to prevent something like this from happening again and a thorough investigation. I’ve used up another of my nine lives, but why would you have nine unless you plan to use them? We live, learn and race on,” Richard wrote.