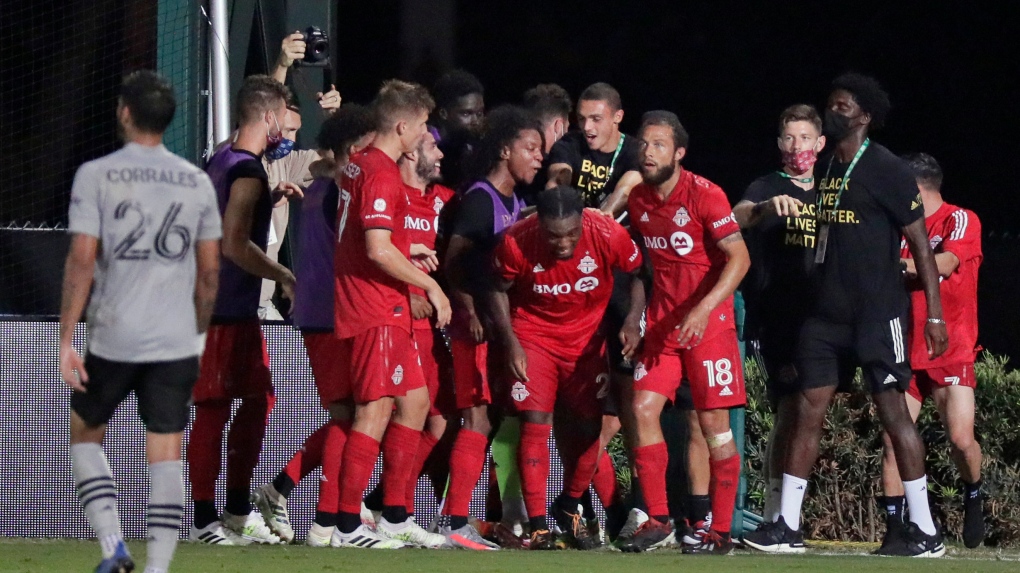 TORONTO -- Back home training following quarantine in the wake of the MLS is Back Tournament, Canada's three teams await word on where and when they will play next.

It's just the latest step in a stop-start MLS season, with the U.S. border looming large during the global pandemic.

But it looks like the Montreal Impact, Toronto FC and Vancouver Whitecaps could see a lot of each other in the near future.

“I think there'll be a time period where we will play the Canadian teams, hoping that that will get us farther along - that there's some solution where we can get some games in against the Eastern Conference teams that are in the States,” said Toronto coach Greg Vanney.

“And that somehow that will put enough games together to then get us to some form of a playoff scenario. How we manage that, I'm not sure yet, in terms of does that mean we have to relocate, does that mean we can fly down and fly back? There's so many variables and governments involved and issues that no conclusion has been determined or made.

“And so right now what we're preparing for is to play the Canadian teams and I'm just waiting for finalized dates of when those games will happen so we know what days we're going to be going.”

Whitecaps CEO and sporting director Axel Schuster, fresh out of quarantine, is also preparing for games against Canadian opposition in the short-term.

“I feel very good and confident that we (will) get that done,” Schuster said. “I'm part of the process and I know it's only a few formalities that still have to be solved. But they have to be solved because all of that is COVID-related.

“It's about restrictions due to this virus and how to get it done in a safe and secure way, with all protocols in place,” added the German. “And I don't get tired of saying that I like the Canadian approach throughout the whole crisis in this pandemic.”

“Whatever time it takes it should take, because I totally trust and believe in the authorities here in Canada,” he added.

On Saturday, MLS has released a series of dates for U.S. teams in what it dubbed the first phase of return to play in home markets.

The pandemic halted play March 12, some two weeks into the season. Play resumed July 8 with the MLS is Back Tournament, which wrapped up Tuesday with Portland's 2-1 win over Orlando City SC.

Each of the three group-phase games at the Florida tournament counted in the regular-season standings.

The first phase sees most teams playing six matches against regional opponents through Sept. 14. FC Dallas and Nashville SC, both forced to withdraw from the tournament because of COVID-19, are playing an additional three games to make up for those missed at the tournament.

The Canadian teams will likely face each other over that period.

The regular season will conclude Nov. 8, with the league promising to release the remainder of the schedule in early September. Eighteen clubs will make the playoffs, up from 14 last year, with the post-season running Nov. 20 to Dec. 12.

For Vanney, the goal is to avoid thinking about the uncertainty facing Canadian teams.

“We talk about this a lot with the guys - that we just have to focus on the things that we can control and understand that in our minds we have to be ready to adapt in any scenario.”

One possibility, raised by Montreal Impact president Kevin Gilmore on the weekend, could see Canadian teams playing “home” games at a U.S. venue in the second phase of the season's resumption.

“If there's a scenario that has us moving, that's obviously something that guys are going to have in the back of their minds and (be) concerned about,” said Vanney.

“So again trying to just keep them focused on the here and now is always the challenge in this time period. I hate saying this phrase but it is a little bit of what it is at the moment. What we need to worry about is just getting our fitness and our legs under us and be ready to play whenever this first game shows up.”

It's a topsy-turvy time for all concerned, including coaches - who Vanney notes usually like to start with a date and work backwards to prepare for it.

NHL teams have come to Canada for the payoffs, using Toronto and Edmonton as hub cities with the NHL creating bubbles for participants to protect them. But the Toronto Blue Jays were forced to move south after the federal government declined to open the border to U.S. teams because of the American COVID-19 numbers.

MLS says teams will travel by chartered flights or buses and, for the majority of road trips, will arrive and depart the host city on matchday.

That won't be the case for the Whitecaps, who would play both Montreal and Toronto on a trip east.

The majority of matches will be played without fans although the league says it is working with local health authorities and government officials on a plan for limited capacity at certain games where allowed.

For Vanney, being home is a welcome return from the Orlando tournament bubble to his wife and four kids - and Canada, even if it meant another 14-day quarantine upon arrival.

“It's nice to be back and to be out of quarantine, into some form of the civilized world ... You have to be safe and smart, we have to do all that, but it doesn't feel like you're encountering the virus everywhere you go. And people are reasonable. They're wearing masks, they're acting on behalf of themselves and everybody else.

“It's been nice. I've been personally and our family is really happy to be in a society ... that's not so polarized politically and can actually just do right things and try to protect each other and make rational decisions.”

This report by The Canadian Press was first published Aug. 12, 2020.