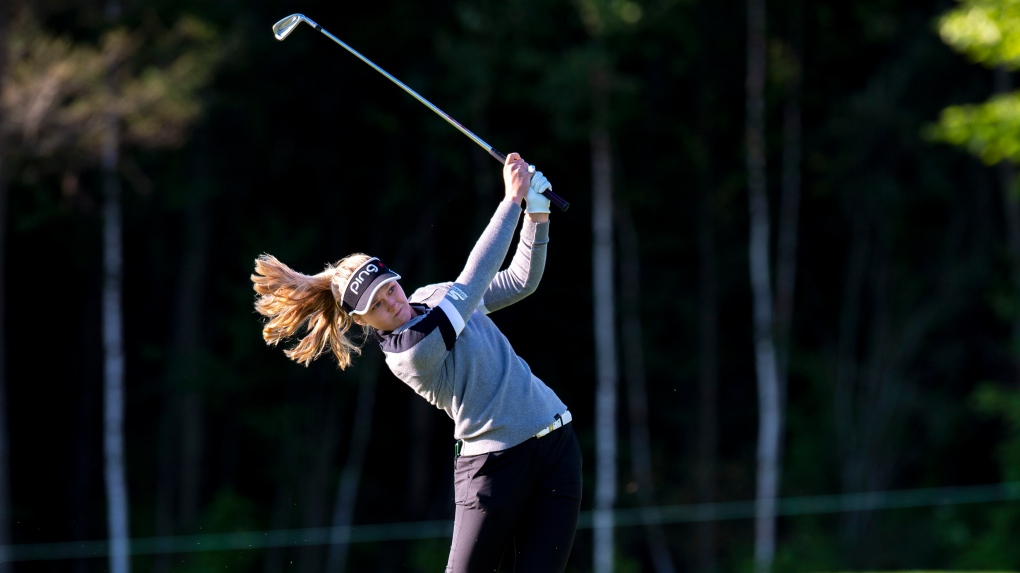 Brooke Henderson of Smith's Falls, Ont. hits her approach on the second hole during the first round of the CP Women's Open in Aurora, Ontario, Thursday August 22, 2019. THE CANADIAN PRESS/Frank Gunn

AURORA, Ont. -- Canada's Brooke Henderson is quite comfortable in the role of defending champion.

She showed why during a strong opening round Thursday morning at Magna Golf Club.

Henderson fired a 6-under-par 66 for a two-shot clubhouse lead before American Annie Park set a competitive course record at 7-under 65 in the afternoon group to take sole possession of first.

With impressive length off the tee and a putting stroke that was reliable, the 21-year-old Henderson from Smiths Falls, Ont., displayed the same form that carried her to victory a year ago in Regina.

"It's nice to be in a position where I had a good round, everything seemed to go right for me," Henderson said. "Hopefully I can continue to stick to my gameplan, make a lot of birdies, and I would love to be in this position on Sunday."

Park didn't know that she was making history at the exclusive Magna Golf Club, instead hoping for a career-low 64. She didn't feel bad about stealing Henderson's thunder, either.

"Brooke is a phenomenal player and not only that, she's a great person. She's such a sweetheart. I can see why the fans love her," said Park. "I was focused on my own game out there and tried to play my best."

Park wasn't the only one to gain ground on Henderson in the afternoon. Quebec City's Anne-Catherine Tanguay, Jin Young Ko, Nicole Broch Larsen and Pajaree Anannarukarn also shot 6-under 66 to enter into a five-way tie for second.

The 6,709-yard course has wide fairways and sets up nicely for big hitters. Henderson, who's ninth on the Tour in average driving distance, gave herself opportunities and took advantage.

"For me when I'm playing well, (it's) my ball striking, hitting a lot fairways, greens, and then just hoping I'm making some putts too," she said.

Henderson said she felt calm on the first tee as dozens of supportive fans lined the block area. She crushed her opening drive and was on her way to a solid front nine that included four birdies.

Her lone hiccup came on the 399-yard, par-4 fourth hole after her drive found a bunker. Henderson, who settled for bogey, missed only one other fairway on the day and hit 16 of 18 greens.

"I just tried to keep things really simple," she said. "When I showed up this morning it was really cold and windy and I was like, 'Uh oh.' But in the back of my head it was also sort of like Sunday last year, so I figured it might not be a bad thing."

Henderson closed with a 65 at Wascana Country Club in 2018 to become the first Canadian winner of this event in 45 years.

She was rewarded for her aggressive play at that tournament, but had to be more careful here with swirling winds making club selection more challenging.

After setting up on the par-3, 167-yard 17th, Henderson returned to her bag and had another chat with her sister and caddie Brittany. With a tough pin position behind a greenside pond, Henderson decided to play it safe by landing on the right side of the green and then two-putting for par.

Henderson pulled her drive on the 18th hole but rebounded with one of her best shots of the round. With a favourable lie in the rough, she elevated the ball nicely, cleared a bunker in front of the green and stuck the ball within four feet.

She hit the birdie putt to the delight of the partisan gallery.

"All the birdies pretty much fell for me today, which is a great feeling," Henderson said. "It's going to be hard to back up. Hopefully I'll go out and keep hitting it well."

Another birdie for @BrookeHenderson on 7 gets her to 2-under and two shots off the lead @cpwomensopen.

Henderson has won nine career LPGA Tour events, a record for Canadians on the PGA or LPGA Tours. She's sixth on the LPGA money list this year.

The 156-player list will be trimmed to low 70s and ties after Friday's second round. Favourable weather conditions were expected through the weekend.

Unlike last year, domestic television coverage is available for all four rounds with TSN and RDS picking up a simulcast of the Golf Channel feed.

However, only three hours of coverage are provided each day. The early afternoon cutoff on Thursday came just before Henderson finished her round.

The 2018 tournament was the first year in recent memory that a Canadian sports network did not broadcast the event or pick up the simulcast.

When Henderson led after 54 holes last year, Bell Media and Golf Channel reached an agreement to allow Canadian viewers to watch the last three hours of the final round.