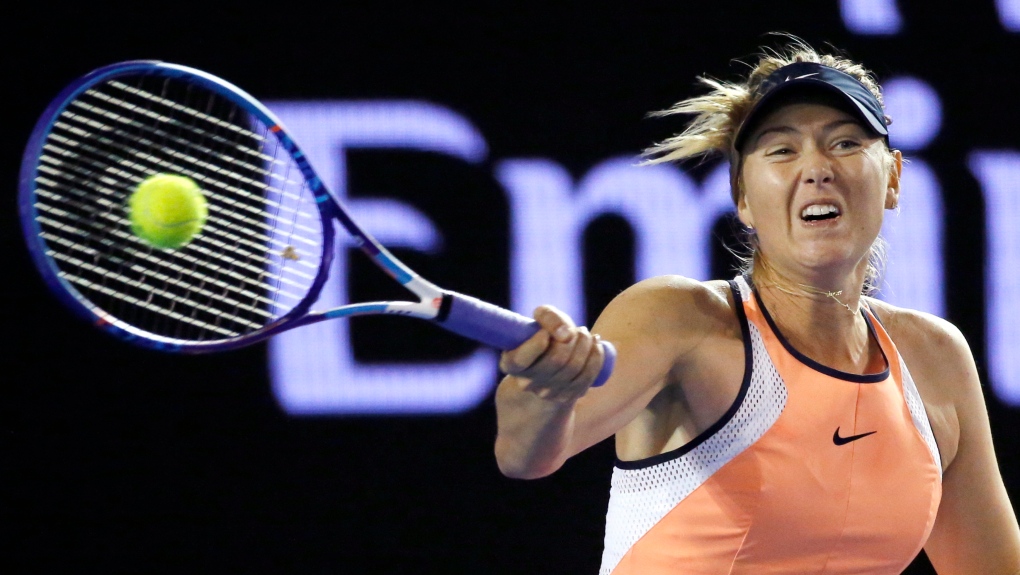 In this Wednesday, Jan. 20, 2016 file photo, Maria Sharapova of Russia hits a forehand return to Aliaksandra Sasnovich of Belarus during their second round match at the Australian Open tennis championships in Melbourne, Australia. (AP Photo/Vincent Thian)

After withdrawing from the French Open, injured Russian tennis star Maria Sharapova will rely on a Canadian to get her back on track.

Calgary's Marcin Goszczynski -- a strength and conditioning coach and massage therapist rolled into one -- will be a key ingredient in coaxing Sharapova's problematic right shoulder through what could be her final run.

The former world No. 1 and owner of a career Grand Slam -- who dropped out of the French Open on Wednesday to give her more time to rehab for the grass-court season and Wimbledon -- has always tried to surround herself with the best. In the micro-universe occupied by the world's elite athletes, Goszczynski came highly recommended. He started working with Sharapova on an occasional basis in 2017.

Goszczynski, 36, keeps a low profile despite his sterling resume. The former national team speedskater has worked with hockey star Sidney Crosby and has been to the Olympics with the Canadian speedskating and bobsled teams.

He also has worked with track and field Olympic medallists Andre de Grasse and Greg Rutherford and was a key contributor as speedskater Denny Morrison recovered from a motorcycle accident and stroke to make the Olympics in Pyeongchang, South Korea last year.

After nearly two decades on the oval, Goszczynski knew he wanted to work with his hands.

His parents, Polish downhill ski racers who defected to Germany and then immigrated to Canada with their young son to seek a better future, chose Calgary just as the city was gearing up for the 1988 Winter Olympics.

The son wanted to study massage therapy; his parents wanted him to get a university degree. So Goszczynski graduated from the University of Calgary with a kinesiology degree.

Chiropractor school was prohibitive. So as Goszczynski worked as a strength and conditioning coach by day and finished a two-year, 2,200-hour massage therapy certification at Mount Royal University in the evenings.

"One person who believed in me early on was (Wickenheiser). She gave me a chance, leading up to the (2014) Sochi Games, and was one of the first people you could consider high profile," Goszczynski said. "Word of mouth kind of started to snowball, and I was exposed to a lot of different professionals in a lot of different sports."

Wickenheiser has nothing but praise.

"Marcin is incredibly talented. He really understands the whole picture of the athlete -- mental, physical and emotional, and how that plays into performance," she said. "He has a rare combination of great hands for manual work and great intuition as well. He's a true master of his craft and Sharapova is lucky to have him on her side."

Humphries, who first met Goszczynski when he was competing, said that experience sets him apart.

"It helps give him a huge advantage over other therapists," she said. "He knows how much the body can take physically, mentally, and how important therapy and recovery are in the process. And his drive for excellence didn't stop when he retired from sport, which is what makes him one of the best in the world at what he does."

Goszczynski is more than a strength and conditioning coach -- and more than a massage therapist and soft-tissue specialist. So what to answer when people ask what he does?

Perhaps the answer comes from his father, who owns an auto body shop.

Goszczynski, in a way, runs a human body shop.

Along the way to his multidisciplinary expertise, Goszczynski learned from experts in several fields. And it was a happy confluence of those experts that paved the way to the 32-year-old Sharapova.

During time with Crosby in the hockey off-seasons, he met noted chiropractor Mark Lindsay, who has worked with Sharapova.

When agent Max Eisenbud was looking for someone to help Sharapova, he asked both Lindsay and Pine for recommendations.

Both -- independent of each other -- recommended Goszczynski.

"He is able to feel with his hands, watch movement patterns with his eyes, and overall make connections that allow his athletes to excel at the elite level. And he pushes his knowledge and abilities to the limit, matching the effort level of the athlete," Humphries said.

Sharapova had shoulder surgery in 2008. But since then, it has always been a challenge. Over the last year, the Russian has played well -- when she has played. But she'll wake up one morning, and the shoulder can't go, and so it's back to the drawing board.

She has been out since February, trying various treatments and working on a return.

"When someone isn't as diligent in their preparation as Maria is, the chances of coming back are much lower. But when you start dealing with something that's somewhat out of your control genetically, it's a challenge. There are no easy answers; you find out what works and hasn't worked and bring in something new -- a new vision," Goszczynski said.

"It's a managing thing. Can we squeeze something out to make sure she has an opportunity to give it one last shot, potentially at the end of her career? Yes. But hopefully we can do better, make it last even longer."