Brady's back, bringing the 'ampness' with him 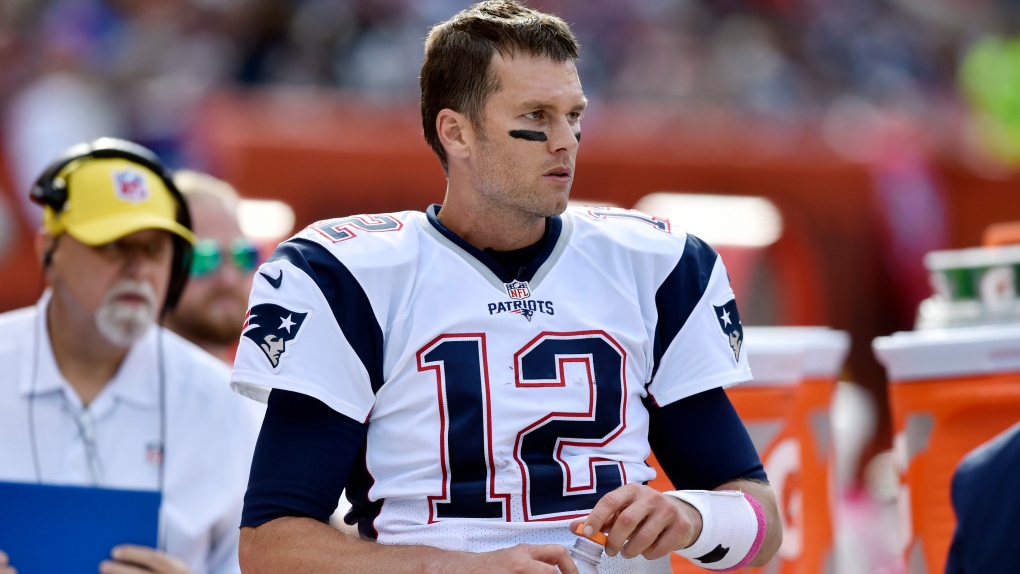 New England Patriots quarterback Tom Brady (12) watches from the bench late in the second half of an NFL football game against the Cleveland Browns, Sunday, Oct. 9, 2016, in Cleveland. (AP Photo/David Richard)

CLEVELAND -- Tom Brady claimed there was no extra motivation when he took the field Sunday.

The arm pump toward the Patriots fans in the Cleveland stands as he began warmups. The mini-Usain Bolt celebration on the sideline after running for a first down. Oh yeah, the 406 yards passing and three touchdowns, all to Marcellus Bennett, a tight end he'd never thrown to in a real game.

It might not have been vintage Brady after four weeks suspended for his role in the "Deflategate" scandal, but it was plenty good in a 33-13 victory over Cleveland.

In Rob Gronkowski's estimation, "Tom always brings the ampness to the table."

Maybe he was bringing a warning to the rest of the NFL, too. From the beginning, it was pretty much the same Brady who has terrorized the league for 17 seasons and won four Super Bowls. Yet he recognized how much better it can be.

"I try to go out and do my best. I know my teammates expect that out of me and I expect that out of them," he said before admitting there were mistakes. "Absolutely, there definitely were a few of those and they are the ones you learn from. I can do better in a lot of areas."

On his first series, Brady listened to a loud ovation from the thousands of Patriots fans on hand. He then hit his first three throws and four of five, with the incompletion a drop by James White.

The capper was a 1-yard run by LeGarrette Blount to make it 7-0, after which Brady pumped his arms as he looked to the Patriots' sideline, hugged Gronkowski, then bumped helmets with Blount.

Brady went right back to work on the next two New England possessions, looking as sharp as if this were a Super Bowl. His throws were crisp, particularly on a perfect spiral to Chris Hogan that gained 63 yards. Twice he found Bennett for scores, from 7 and 5 yards.

By halftime, the two-time NFL MVP had New England in front 23-7, going 18 for 25 (with three drops) for 271 yards, and looked somewhat frustrated because the Patriots didn't score on every drive.

"We've got to be able to finish drives off," he said.

It was a more workmanlike second half for New England. He came out with 6:02 remaining to more cheers from the remaining fans, few of whom were in Browns colours. He went 28 of 40 and also rushed for 14 yards.

"That's his first game back and he goes 406," Edelman said. "That's pretty special."

Brady sat patiently next to Edelman on the bench while Cleveland (0-5) went three-and-out to begin his first meaningful game since losing the AFC championship in Denver in January. Naturally, he connected immediately on a quick out to Edelman for 10 yards and a 19-yarder to another old friend, tight end Gronkowski.

A weaving 34-yard journey by Gronkowski set up the Blount touchdown, and the Patriots looked whole again.

"Super great," Gronk said of having his quarterback back. "He's our leader, he's our guy."

Hours earlier, dozens of fans, many in No. 12 Patriots jerseys, eagerly awaited Brady's entrance from the tunnel. When their returning hero trotted onto the field with backup Jimmy Garoppolo, a huge cheer and chants of "BRADY, BRADY" broke out. He looked up at a group of fans behind the end zone and emphatically pumped his right arm.

He interrupted his warmup throws -- with fully inflated footballs, presumably -- to chat with referee Bill Vinovich.

The NFL suspended Brady for four games for his role in the scheme to use improperly inflated footballs in the January 2015 AFC championship game. He appealed and won, then lost, and during the summer he dropped the fight.

While it's impossible to tell if a quarterback who missed a month of action is rusty, Brady had plenty of steam on his throws all day.

Before the game, Brady spent worked out in the corridors under the stadium while several teammates were on the field. Brady stretched and ran with resistance bands around his waist, a somewhat unique way to get ready on game day.

When the Patriots arrived before 10 a.m., Brady wandered onto the field for a short spell, looking around the empty stands, where thousands would later watch a vintage Brady performance and another New England lopsided win.

So what did you miss most during the suspension, Tom?

"Everything," he said. "I think being with my teammates and playing with them and to celebrate with them. It's just fun to run out there and play.

"It's been a fun week getting ready to play and back to what I love to do. And 4-1 is a pretty good place to be right now."