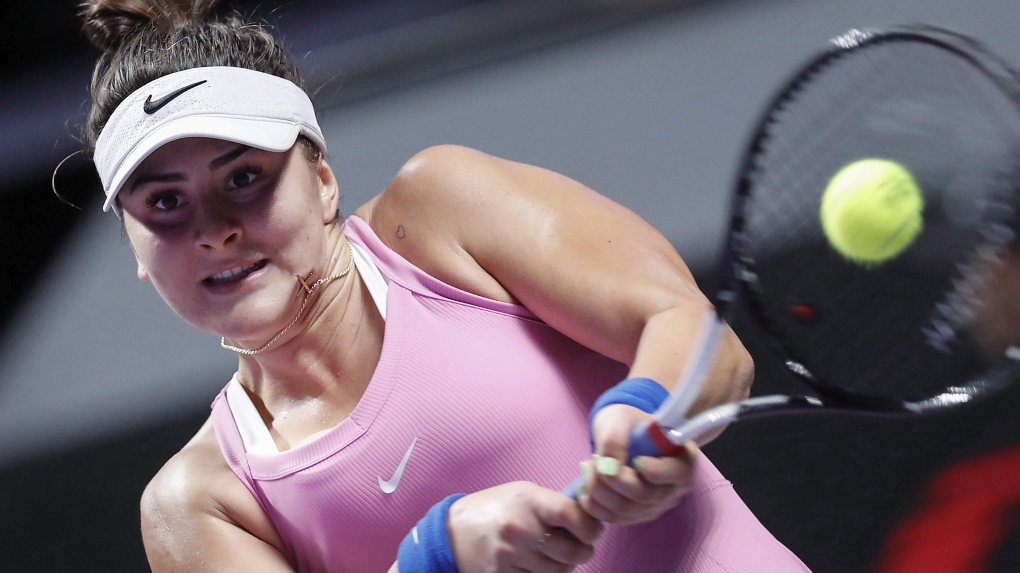 Canadian tennis star Bianca Andreescu is expected to make her return from a three-month injury layoff in next week's Fed Cup tie against Switzerland.

Also on the Canadian roster for the Feb. 7-8 qualifier at the Swiss Tennis Arena are Eugenie Bouchard of Westmount, Que., Leylah Annie Fernandez of Laval, Que., and doubles specialist Gabriela Dabrowski of Ottawa.

The winner of the best-of-five matchup on the indoor hardcourt will earn a berth in the Fed Cup Finals in April.

"The team is looking forward to playing in Biel," Canadian captain Heidi El Tabakh said Tuesday in a release. "The girls had some good results to start the year and I now hope they will carry that energy into this tie.

"Switzerland has a very tough team and will have the support of a home crowd, but I know that our team will fight until the very last ball with the goal of qualifying for the Fed Cup Finals in Budapest."

Headlining the Swiss roster is seventh-ranked Belinda Bencic, who's joined by No. 68 Jil Teichmann, No. 76 Viktorija Golubic, No. 117 Stefanie Voegele and No. 180 Timea Bacsinszky. Bencic is the highest-ranked doubles player on the squad at No. 114.

Heinz Guenthardt will serve as captain for ninth-ranked Switzerland. Canada, which is coming off a 4-0 World Group playoff loss to the Czech Republic last April, is ranked 13th.

The losing team will fall into a playoff tie in April against a Regional Group I nation for a chance to reach the 2021 qualifiers.

Andreescu, the world No. 6 from Mississauga, Ont., hasn't played a competitive match since suffering a left knee injury at the WTA Finals in Shenzhen, China. She had hoped to return at this month's Australian Open, but pulled out about a week before the start of the tournament.

The 19-year-old was hampered by injuries throughout her breakthrough season last year. Andreescu, who started the year outside the top 150, rocketed up the rankings after earning titles at the BNP Paribas Open, Rogers Cup and US Open.

A shoulder injury last March kept her out of all but one match from April through July. She retired after one match at last year's French Open and didn't play at Wimbledon.

Andreescu has declined to offer specifics on the severity of her knee injury.

"Well I don't need surgery so I wouldn't say it's very bad," she told The Canadian Press last month. "I can't really say much about it. I'm just trying to rehab as much as possible and stay as positive as I can."

Andreescu twisted her knee when she stretched to make a forehand return during a match in late October. She said at the time that she "heard a crack" and was quite limited after that, eventually withdrawing from the season-ending competition after getting results from an MRI exam.

This is the first year under the new Fed Cup Finals format.

The official Switzerland-Canada draw will be held Feb. 6, with two singles matches set for the following day. Two more singles matches and the lone doubles match are scheduled for Feb. 8.

Andreescu earned two singles victories in Canada's 4-0 win over the Netherlands in a World Group II playoff last year. She has played in eight Fed Cup ties over her career and holds a 7-3 record in singles.

Fernandez, the world No. 207, is coming off her first appearance in a Grand Slam main draw. The 17-year-old French Open junior champion won three qualifying matches in Melbourne before falling in the first round.

Fernandez lost in her Fed Cup singles debut last year against the Czechs.

Bouchard, a former world No. 5, was eliminated in the final round of qualifying at the Australian Open and dropped her opening match at a lower-level Challenger Series tournament this week.

She fell out of the top 100 last summer and is currently ranked 212th. Bouchard, who owns a 12-4 record in Fed Cup singles play, secured two singles wins in her last appearance on the Fed Cup team, a 3-2 victory over Ukraine in a 2018 World Group II playoff.

Dabrowski, the world No. 8 in doubles, has a 7-6 doubles record since making her Fed Cup debut in 2013. She reached the WTA Finals in doubles for a third straight year last fall.

Canada has a 3-2 edge in all-time head-to-head Fed Cup meetings against Switzerland dating back to 1967. Switzerland beat Canada 3-2 in the last matchup in 2004 at Dorval, Que.

In men's play, Canada reached the championship at the Davis Cup Finals in November before falling to Spain.