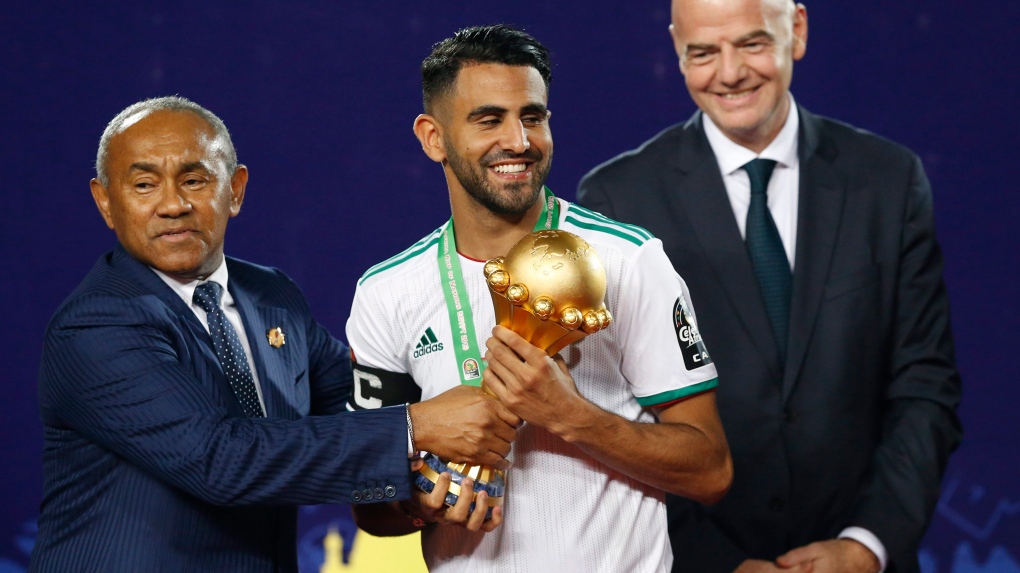 The decision by the FIFA ethics committee against Ahmad, one of the governing body's vice-presidents, arrived during the soccer official's re-election campaign. FIFA was overseeing integrity checks on the potential candidates for the March 12 election.

Even before being elected to lead the Confederation of African Football in 2017, the former minister in Madgascar's government had been linked to seeking cash gifts in 2010 from a later-disgraced Qatari official. He was later accused of wrongdoing at the body's Cairo headquarters by his top administrator, and detained and questioned in Paris as part of a French investigation into a suspect soccer equipment contract.

The ethics committee found “Ahmad had breached his duty of loyalty, offered gifts and other benefits, mismanaged funds and abused his position as the CAF President,” FIFA said.

Ahmad was also fined 200,000 Swiss francs ($220,000), though it is unclear how FIFA can enforce payment. The sanctions can be challenged at the Court of Arbitration for Sport.

Ahmad did not immediately respond to a request for comment.

His first four-year term was clouded with accusations of financial wrongdoing and misconduct at CAF. The accusations were made by the organization's general secretary, who was then fired.

Ahmad was detained by authorities at a luxury hotel used by FIFA in Paris on the eve of the 2019 Women's World Cup. He was questioned about a CAF equipment deal with a French company that appeared to have little connection with soccer.

“The investigation into Mr. Ahmad's conduct in his position as CAF President during the period from 2017 to 2019 concerned various CAF-related governance issues, including the organization and financing of an Umrah pilgrimage to Mecca, his involvement in CAF's dealings with the sports equipment company Tactical Steel and other activities,” FIFA said in a statement.

Ahmad had been supported by FIFA leaders in Zurich when he was elected in 2017, ousting FIFA senior vice-president Issa Hayatou after 29 years.

“The circumstances that have befallen him are unfortunate and make me deeply sad,” said Phillip Chiyangwa, Ahmad's campaign manager in 2017.

Chiyangwa is a Zimbabwean who leads the southern African group of national soccer bodies.

An audit of CAF finances pointed to irregularities and unreliable accounting under Ahmad's leadership, however. The report was ordered by FIFA last year while it effectively took over running the African organization for six months.

CAF appeared to pay about $100,000 toward 18 people, including Ahmad and the heads of 16 of the continent's 54 national member federations, to travel on the pilgrimage in Saudi Arabia.

It is unclear if officials who made the trip also face a FIFA investigation for unethical conduct.

CAF said in a statement it was “concerned about the reputational consequences of this long procedure” against its outgoing president.

The interim president will be Constant Omari, CAF's first vice-president and a member of the FIFA Council.

On the field, African soccer had a difficult time during Ahmad's presidency. None of Africa's five teams at the 2018 World Cup in Russia advanced to the knockout rounds, though Senegal was eliminated from the group stage only by a rare tiebreaker of disciplinary record.

A chaotic African Champions League final in 2019 was abandoned in the second leg when Wydad Casablanca refused to continue playing against Esperance in a dispute over a disallowed goal and the video review system not being installed at the stadium in Tunisia.

A CAF executive committee decision to order the game replayed was overturned by the Court of Arbitration for Sport, and the title was eventually awarded to Esperance.

Two of Ahmad's executive committee colleagues, Augustin Senghor of Senegal and Ahmed Yaya of Mauritania, are among four men who said they are standing against him in the presidential election. CAF has yet to confirm who was formally nominated and passed integrity checks.

Senghor and Yaya could be joined in the contest by former FIFA executive committee member Jacques Anouma of Ivory Coast and billionaire businessman and soccer club owner Patrice Motsepe of South Africa.