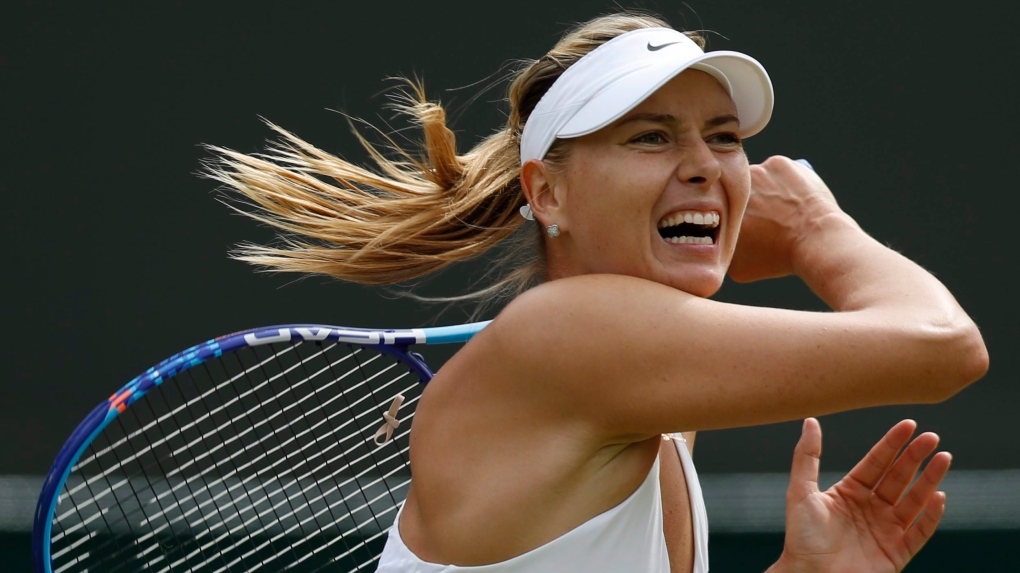 In this July 3, 2015, file photo, Maria Sharapova returns a ball to Irina-Camelia Begu during their singles match at the All England Lawn Tennis Championships in Wimbledon, London. (AP/Pavel Golovkin, File)

Maria Sharapova was a transcendent star in tennis from the time she was a teenager, someone whose grit and groundstrokes earned her a career Grand Slam and whose off-court success included millions of dollars more in endorsement deals than prize money.

And yet, Sharapova walked away from her sport rather quietly Wednesday at the age of 32, ending a career that featured five major championships, time at No. 1 in the WTA rankings, a 15-month doping ban and plenty of problems with her right shoulder.

There was no goodbye tournament, no last moment in the spotlight, for someone so used to garnering so much attention for so long, with or without a racket in hand.

"I've been pretty good in the past, balancing my time with my sponsors with my tennis, because I know my priority. At the end of the day, what I love doing is competing, and that's where my heart is at: on centre court," Sharapova said in a 2006 interview with The Associated Press right before that year's U.S. Open.

Around that time, she signed a "lifetime" contract with a racket company, a deal that eventually was ended. And two weeks after that, she would win the U.S. Open trophy while wearing an outfit that resembled a sparkly black cocktail dress, part of the "couple of sides" persona she cultivated.

Two years later, though, Sharapova missed the tournament at Flushing Meadows because she needed surgery on her shoulder, which has troubled her off and on ever since; she had another operation on that joint in 2019.

She lost the last four matches she played at major tournaments, with first-round exits in her past three appearances, including at the Australian Open in January. That turned out to be the last match of her career and made her 0-2 this season.

In an essay written for Vanity Fair and Vogue about her decision to retire, posted online Wednesday, Sharapova asks: "How do you leave behind the only life you've ever known?"

She disclosed that she "had a procedure to numb my shoulder to get through the match" a half-hour before walking on court for a first-round exit at last year's U.S. Open, writing: "I share this not to garner pity, but to paint my new reality: My body had become a distraction."

Born in Russia, and "discovered" by Martina Navratilova at an exhibition event in Moscow, Sharapova moved to Florida as a child and trained at the Nick Bollettieri Tennis Academy.

"We'll miss her, baby. She's very special," Bollettieri told the AP in an interview last year, when Sharapova returned to his academy as she worked her way back from her latest shoulder procedure. "The tour will miss her. ... Always competitive. All business."

Sharapova burst onto the tennis scene at 17 by upsetting Serena Williams to win Wimbledon in 2004. She would beat Williams again at that year's season-ending tour championship to improve to 2-1 against the American -- and never won another one of their matchups, dropping the next 19 in a row.

Powerful at the baseline, and famous for a never-give-up attitude, Sharapova reached No. 1 for the first time at 18 in 2005. After adding her second major trophy at the U.S. Open the following year, she collected an Australian Open title in 2008, and then won the French Open in 2012 and 2014.

Sharapova is one of only six women in the professional era to win each major tennis title at least once. She made 10 Grand Slam finals in all, going 5-5; the last came in 2015 at the Australian Open, where she was the runner-up to Williams.

At the 2016 Australian Open, where Williams beat her in the quarterfinals, Sharapova tested positive for the newly banned drug meldonium.

After initially being given a two-year suspension, Sharapova appealed to the Court of Arbitration for Sport, which reduced the penalty, ruling she bore "less than significant fault" in the case and could not "be considered to be an intentional doper."

Since returning from that suspension in 2017, Sharapova managed to reach only one Slam quarterfinal.

Her 6-3, 6-4 loss to Donna Vekic at Melbourne last month sent Sharapova's ranking tumbling outside of the top 350 -- she is 373rd this week.

Asked after that defeat whether it might have been her last appearance at the Australian Open, Sharapova repeatedly replied with, "I don't know."

"I put in all the right work. There is no guarantee that even when you do all of those things, that you're guaranteed victory in a first round or in the third round or in the final. That's the name of this game," Sharapova said after what turned out to be her final match. "That's why it's so special to be a champion, even for one time."

A little more than a month later, she told the world she was done with her playing career.

"Tennis showed me the world -- and it showed me what I was made of. It's how I tested myself and how I measured my growth," Sharapova wrote on Twitter on Wednesday. "And so in whatever I might choose for my next chapter, my next mountain, I'll still be pushing. I'll still be climbing. I'll still be growing."