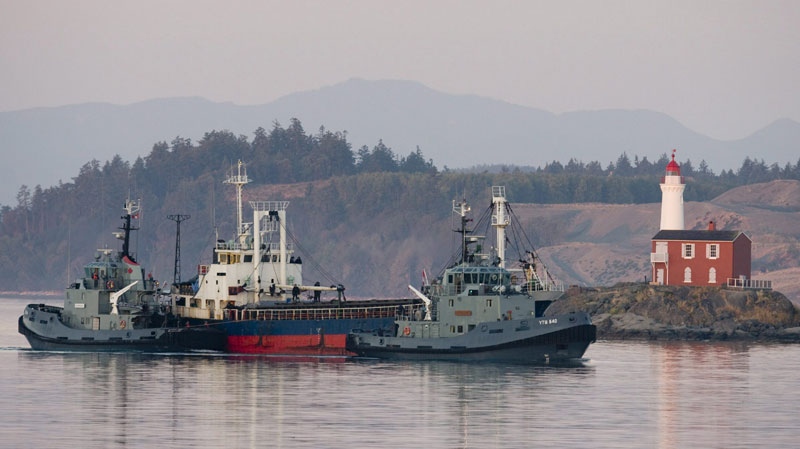 The MV Sun Sea is escorted past Fisgard Lighthouse and into CFB Esquimalt in Colwood, B.C.,Friday, Aug. 13, 2010. (THE CANADIAN PRESS/Jonathan Hayward)

VANCOUVER - Some of the Tamil migrants who arrived on ships in British Columbia waters were already rejected refugees from the United Kingdom.

Speaking in Delta, B.C., in front of one of the two ships used to bring in migrants, Kenney told reporters the government has learned some of the migrants were already found not to need refugee protection in the United Kingdom.

"This unlawful behaviour is nothing more than jumping the immigration queue, taking up space and resources in our immigration and refugee system that should be focused on those who are legitimate and lawfully waiting their turn to come to Canada," Kenney said.

But Canadian law doesn't stop a failed refugee claimant in one country from making the same claim in Canada and Canada's refugee criteria is different than other jurisdictions, including the United States.

"It may surprise someone like Mr. Kenney who hasn't been around the refugee field that long, but I've been working in the area for 20 years and it's not common, but it's not unusual for someone to come to Canada who's been refused in another jurisdiction."

McLeod said many countries follow the United Nations Convention on Refugees, including Canada, but its interpretation can be different depending on the country, its political regime and other factors.

"Unfortunately with the current government, they have an ideological bias against refugees, in spite of the fact Canada has other, more important, problems to deal with than bashing refugees to gain votes," he said in a phone interview.

Fingerprints were taken from the migrants who arrived on the MV Sun Sea in August and that was compared with information in the United States, the United Kingdom, Australia and New Zealand.

While all 76 refugee claimants who arrived on the Ocean Lady last October have been released, so far only 72 of the almost 500 Sun Sea claimants have been ordered released.

They have been held while the Immigration and Refugee Board works to confirm their identity.

Kenney said the arrivals of two ships have presented serious challenges to the Canadian asylum system.

"The human and financial resources that were required to ensure the safety of the migrants once they entered Canadian territorial waters, as well as the ability to conduct identity and admissibility examinations, significantly challenged our system."

McLeod, who is duty counsel for several of the migrants on the Sun Sea, said he hadn't heard that any of the migrants from the ship were failed refugees from another country. But it wouldn't surprise him if some were.

Kenney and Public Safety Minister Vic Toews gathered the media in front of the rusty freighter Ocean Lady to announce tough new rules on human smuggling aimed at both the smugglers and the refugee claimants.

The bill proposes giving the federal minister of public safety the power to designate groups of migrants as "irregular," and treat them differently from other refugee claimants.

"Irregular" asylum seekers would be on probation for five years, during which time they would be prevented from leaving the country or from applying to bring over their families or for permanent residence status.

McLeod said no one would argue about going after the smugglers, but he doesn't agree with aiming punishment at refugees.

"That's what's going on right now. Basically they're punishing the 492 people who came on the ship -- including senior citizens, mothers with infant children and fathers -- and (are) making them pay for the smugglers' efforts."

McLeod said his main concern about the new rules is the government's plan to stop refugees from sponsoring their spouses and children.

"If that's to be included in the bill we'll be looking at challenging that."