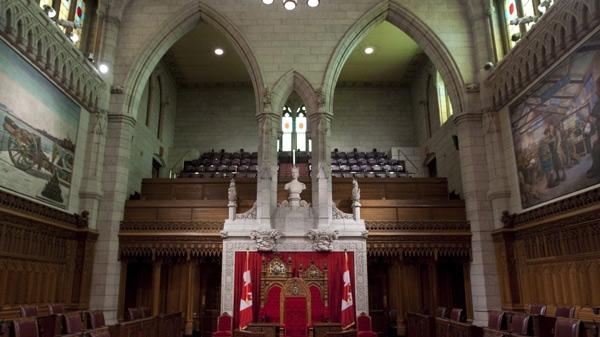 The Senate chamber is seen on Parliament Hil in Ottawa Thursday, August 27, 2009. Reports say Prime Minister Harper is about to fill up to nine Senate vacancies with some of his closest Conservative supporters. (Adrian Wyld / THE CANADIAN PRESS)

OTTAWA - The Tory government's omnibus budget implementation bill has passed a vote in the Senate.

Senators voted 48-44 against the changes made by opposition members of the finance committee to Bill C-9 and passed the legislation.

The Monday night vote puts an end to speculation that the Tories were ready to plunge the country into an election if the bill did not pass.

The Tories hold 52 seats in the 105-seat chamber -- just shy of an absolute majority.

The provisions of the bill which were removed at the finance committee included measures to privatize Atomic Energy of Canada Ltd. and Canada Post's overseas mail operations.

Other provisions included measures to diminish the scope of federal environmental assessments and apply the harmonized sales tax to financial services.