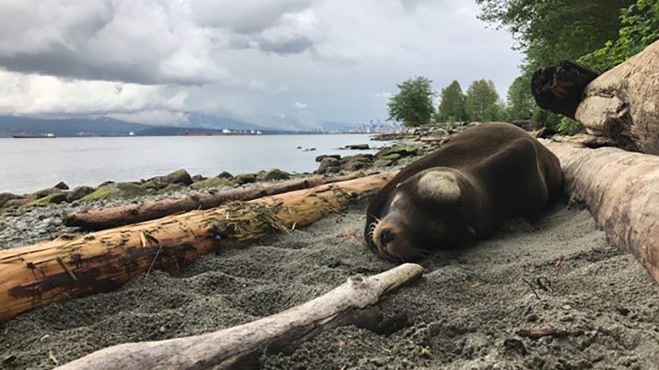 Señor Cinco was found stranded on Spanish Banks on May 5. Source: Vancouver Aquarium

VANCOUVER - Animal rescuers at the Vancouver Aquarium's marine mammal centre say they're trying to save a California sea lion that was shot in the face.

The adult male, which the team named Senor Cinco after he was found on the Mexican holiday of Cinco de Mayo, was spotted on the beach at Spanish Banks, emaciated and unresponsive.

The aquarium says in a news release that it took several days to stabilize the animal, and on Tuesday a team was able to give him a full examination under a general anaesthetic where they discovered he had been shot at least twice in the face.

Dr. Martin Haulena, the aquarium's head veterinarian, says the sea lion's teeth are shattered, he is blind in one eye and the injuries indicate he's been in distress for weeks.

Haulena says it's too early to tell if Senor Cinco will be a candidate for release, but he has a long road to recovery ahead.

California sea lions breed off the coast of Southern California and the Baja Peninsula, but during non-breeding season a large number of males migrate north to B.C.