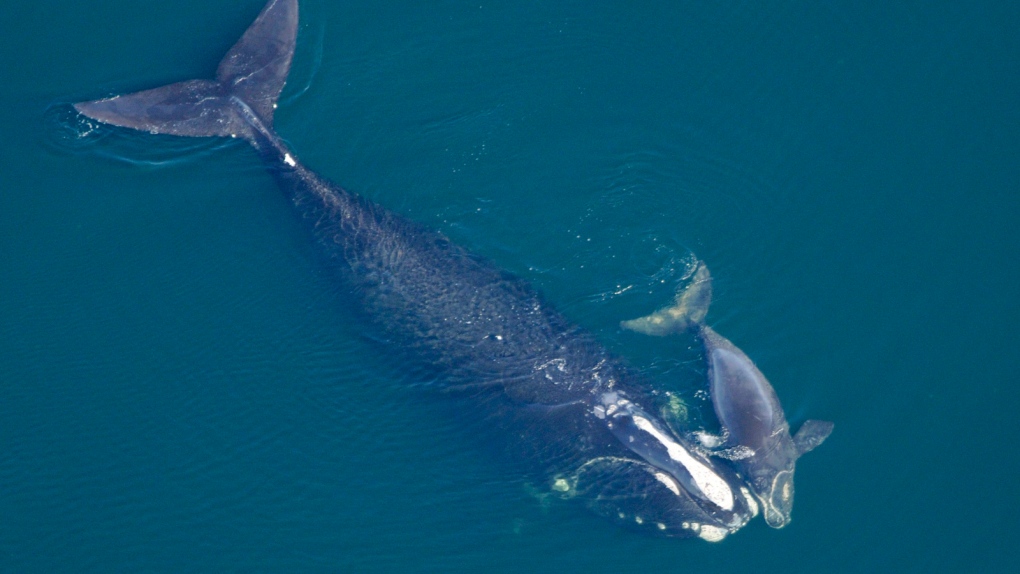 HALIFAX -- Sleek yellow gliders will soon cruise the waters off Nova Scotia in a high-tech bid to track down one of the world's most endangered marine mammals and possibly provide clues to an ecological mystery.

Canadian and American scientists are getting ready to deploy autonomous underwater vehicles around the Scotian shelf to look for rare North Atlantic right whales and learn more about their habitats.

The team is hoping the gliders -- long, slender electric devices that can quietly collect data on the marine ecosystem and its inhabitants -- might identify areas where the whales congregate when they're not in their usual haunts.

"We're going to put eyes and ears into the water and go looking for those missing whales and their habitats," said Chris Taggart, a professor in the Oceanography Department at Dalhousie University in Halifax.

"We know that these whales are going somewhere else and we haven't a clue where."

Taggart is one of several researchers from the New England Aquarium, the Woods Hole Oceanographic Institute and the University of Victoria collaborating on the glider project to see if they can help determine the whales' migratory paths and critical habitats.

The goal is to find the 60-tonne whales so they can try to protect them from their greatest threats, such as ship strikes and entanglements in fishing gear.

The North Atlantic right whales are known to travel into the Bay of Fundy in the summer to feed with their calves. Most make the long trek from their breeding grounds off Georgia and Florida, ending up in the bay's plankton-rich waters around June. They are also known to gather in the Roseway Basin off Nova Scotia's south coast.

But researchers say they have seen fewer of the animals in the habitats they know about, suggesting there are other gathering spots they're unaware of.

Moira Brown, a senior scientist with the New England Aquarium, said they saw the lowest number of right whales in the bay last year and need to figure out where the whales might be going so they can add protections, like alerting ships or rerouting shipping lanes.

"If right whales are changing their distribution, our biggest challenge is going to be (determining) where they aggregate," she said.

"Right whales are an animal that feeds on plankton which moves with currents and they may follow it. And if there are changes in water temperature and currents, it's going to change things but we can't predict that so we need to maximize our eyes on the water."

She and other researchers will fan out across the Bay of Fundy this week to take photographs, collect skin, blow and fecal samples, and do acoustic monitoring to listen to mother-calf pairs.

Brown will also go to the Roseway Basin to look for the whales and prepare to deploy the gliders in September. The project received funding late last month from the Marine Environmental Observation Prediction and Response Network and will be used on the west coast in a few years if it succeeds here.

The gliders, equipped with acoustic devices and high-frequency echo sounders, will listen for whales and can instantly identify what type of mammal they're hearing. The devices come back up to the surface every six to eight minutes and transmit data to crew.

Taggart says that will ultimately allow them to use a whale alerting system that has its own app to notify ships passing through an area if there are animals nearby, so vessels can alter their route to avoid hitting them.

"We can use that information to figure out the ship routing and determine where the highest risk is going to be," he said. "You can send that information back to the ships and say, 'Hey guys, there are whales out here, be careful.' "

The gliders can also help them understand the composition of the ecosystem by identifying the salinity and temperature of the water, and the presence of bug layers that the whales feed on -- another indicator of where the animals are and if that is one of their habitats.

This latest project comes as the North Atlantic right whale population inches up slowly, rising to about 500 from a mere 300 in the late 1990s. Their population has grown by about two per cent a year, with an average of 22 calves being born since 2001 -- doubling the annual average in the '80s and early '90s.

It's not clear what's causing the population increase, but both Taggart and Brown say ship diversion measures are helping reduce the number of whale mortalities. In 2003, the shipping lanes were altered in the Bay of Fundy to steer vessels clear of known whale habitats. Five years later, Transport Canada made the Roseway Basin an area to be avoided by ships of a certain size.

"We're having less dead whales, so it looks like it's working. If there is going to be a shift in habitat use, it's back to the drawing board to figure out how to continue to protect these animals in any new habitat areas that we find," said Brown.

"We're guardedly optimistic that this whale is gaining hold and making a recovery. It's still got a long way to go and we don't want to let our foot up off the pedal just yet."