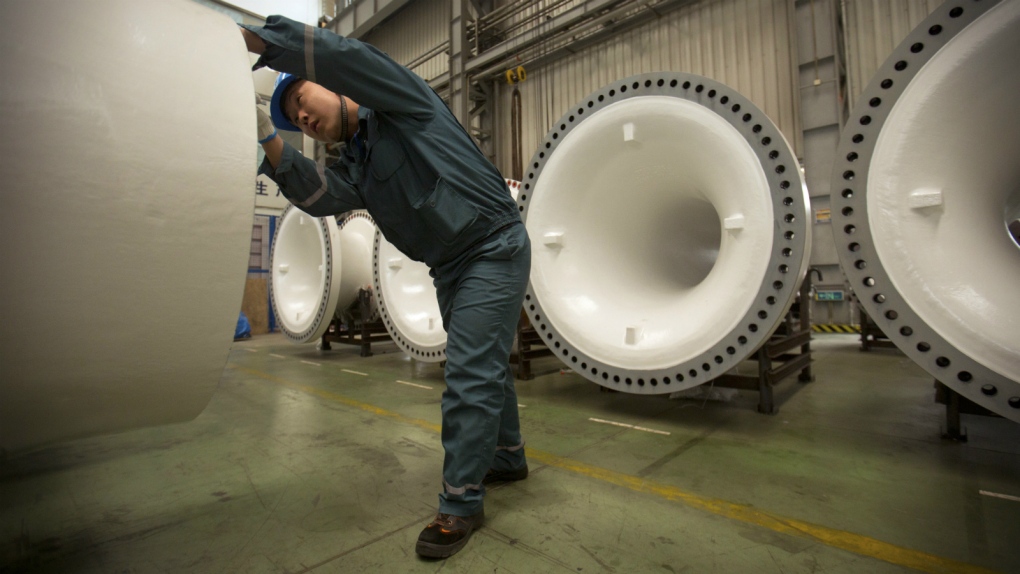 A worker takes measurements on a part for a wind turbine power generator at a factory in Beijing, Monday, Nov. 9, 2015. (AP / Mark Schiefelbein)

WASHINGTON -- For years, cutting carbon emissions to stave off the worst impacts of climate change was routinely near the top of the agenda at talks between the leaders of the United States and China.

The Chinese government recently cancelled construction of more than 100 new coal-fired power plants and plans to invest at least $360 billion in green energy projects by 2020. It is a building boom expected to create an estimated 13 million jobs. China already leads the world in total installed solar and wind capacity.

Trump, who has said global warming is a hoax perpetrated by the Chinese to hurt the U.S. economy, signed an executive order last week that aims to roll back Obama-era policies regulating carbon emissions. He has pledged to reverse decades of decline in coal mining, which now accounts for fewer than 75,000 U.S. jobs.

With Trump threatening to pull out of the Paris climate accord negotiated by the Obama administration, Xi is poised to become the world's foremost leader on climate change. Signed by nearly 200 nations, the 2014 agreement calls for holding global temperature increases to no more than 2 degrees Celsius (3.6 degrees Fahrenheit) in hopes of preventing devastating droughts, storms and sea level rise.

Speaking at the World Economic Forum in Davos, Switzerland, in January, Xi called the Paris accord a "hard-won achievement" and urged signatories to "stick to it."

The White House declined to comment Wednesday on whether climate change will even be mentioned at Mar-a-Lago. U.S. officials are instead expected to focus on enlisting China's co-operation on curbing the North Korean nuclear threat.

While China eclipsed the United States as the world's top carbon polluter more than a decade ago, it is also now outpacing the U.S. in transitioning to a cleaner energy portfolio. China is currently generating about 20 per cent of its electricity from renewable sources, compared to about 13 per cent in the U.S.

China still burns more coal than any other nation, but its consumption of the dirtiest fossil fuel fell in 2016 for a third consecutive year. An analysis by Greenpeace of data from the Chinese National Energy Administration showed an expected corresponding decrease in China's carbon dioxide emissions of 1 per cent in 2017, in what would be the fourth straight year of zero growth or a decline.

That puts China on track to meet its 2030 target under the Paris accord as much as one decade early.

"Given the absolute lack of leadership from the Trump administration, China is seeing a stronger role both in its self-interest as a country threatened by the impacts of climate change, and also as a diplomatic opportunity in the vacuum left by Trump's retrograde position," said Lauri Myllyvirta, a senior coal campaigner for Greenpeace in Beijing.

In China's capital, Trump's public statements doubting that human activity is the primary cause of global warming are greeted with a mixture of bemusement and worry.

As China has burned gargantuan amounts of coal to accelerate the development of its economy, residents of its mega cities have had to deal with choking smog at levels not seen in the United States since passage of the Clean Air Act in 1970.

"In the past, some Chinese officials and ordinary people even believed that climate change was something created by developed countries to curb China's economic growth," said Teng Fei, a vice professor at Tsinghua University's Institute of Energy, Environment and Economy in Beijing. He said Trump's claim that climate change is a hoax might erode public support for taking action reducing the country's reliance on coal.

Wang Ke, a professor at the School of Environment and Natural Resources at Renmin University in Beijing, agreed: "Sometimes we joke that all our efforts are no use against one word from President Trump."

Even as Trump suggests global warming is mostly made up, climate scientists predict the issue will someday arrive literally at his doorstep.

Mar-a-Lago, the site of his summit with Xi, is located in one of the most vulnerable regions in the United States to sea level rise. Some streets in Palm Beach County already flood on sunny days during high tides, and recent studies predict Trump's prized resort will be underwater by the end of the century.