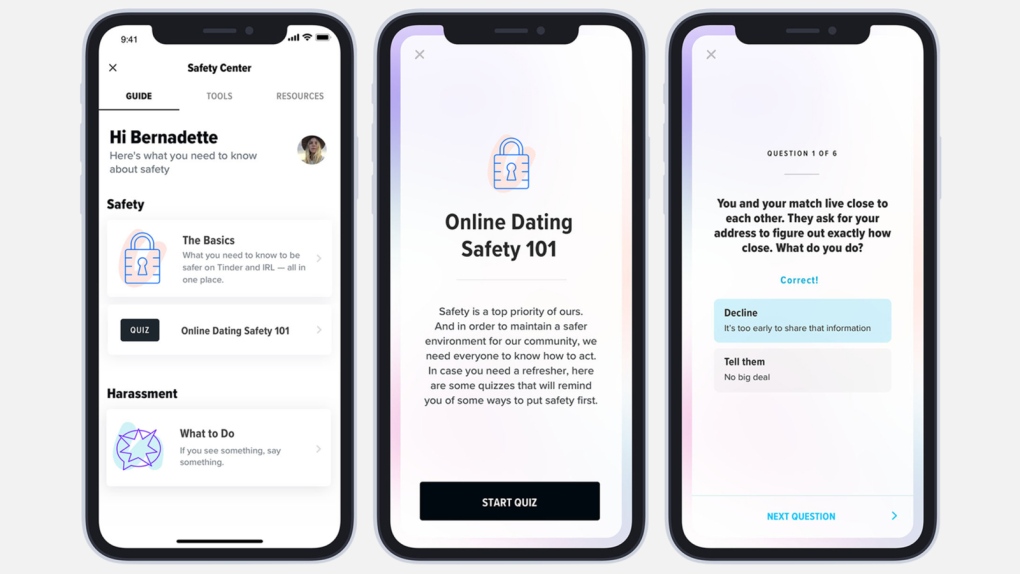 Safety Center will roll out to U.S. users in late January. (CNN)

Tinder is following in Uber's lead in adding in-app safety features for dates that become unsafe.

The dating app is adding new safety features, including a panic button that alerts safety authorities if something goes wrong during a date. Tinder has also added the ability to check-in, telling friends where the daters are.

U.S. users will receive the free new tools next Tuesday in a new section of the app called the Safety Center. Match, the dating conglomerate that owns Tinder, will roll out the new tools to its other U.S. dating services later this year. The company also owns OkCupid, Hinge and the flagship Match.com.

The tools will be powered by Noonlight, a safety platform that Tinder made an investment in. Terms of the deal weren't disclosed.

To use the new Safety Center tools, users will have to also download Noonlight and enable the app's location-tracking tools. Users' dates information, such as location, will have to be manually entered into a new "Tinder Timeline" tool that can be shared with friends.

If the user feels unsafe, they will have to open the Noonlight app and press a button that discreetly contacts Noonlight dispatchers. The dispatcher will first send them a text so they don't have to vocally talk for help. If that's unanswered, Noonlight will send a code and call them. If there are no answer, Noonlight will dispatch emergency services.

The aim to let users ask for help without raising suspicions during the date. That's why it's panic tools are located within the Noonlight app.

Location-sharing apps have come under scrutiny recently for not selling users' information to advertisers. Match won't have access to Noonlight's location data and Noonlight claims it doesn't sell user data. Users can also switch off location services within the phone's settings when they aren't on dates.

Tinder is also testing a new photo verification tool so users can ensure they're talking to someone real before they go on the date. A user will have to submit picture certain poses. Tinder's AI technology will compare those photos to previously submitted pictures. Profiles will have a check mark for those that complete the service. Tinder said the tool will become widely available later this year.

Match said it's the first dating company to integrate in this type of service. Dating apps and ride-hailing companies, like Uber and Lyft, have been blasted for putting users in unsafe positions. Both of those companies have rolled out similar so-called panic buttons and safety tools to address those concerns.