These Black nature lovers are busting stereotypes, one cool bird at a time 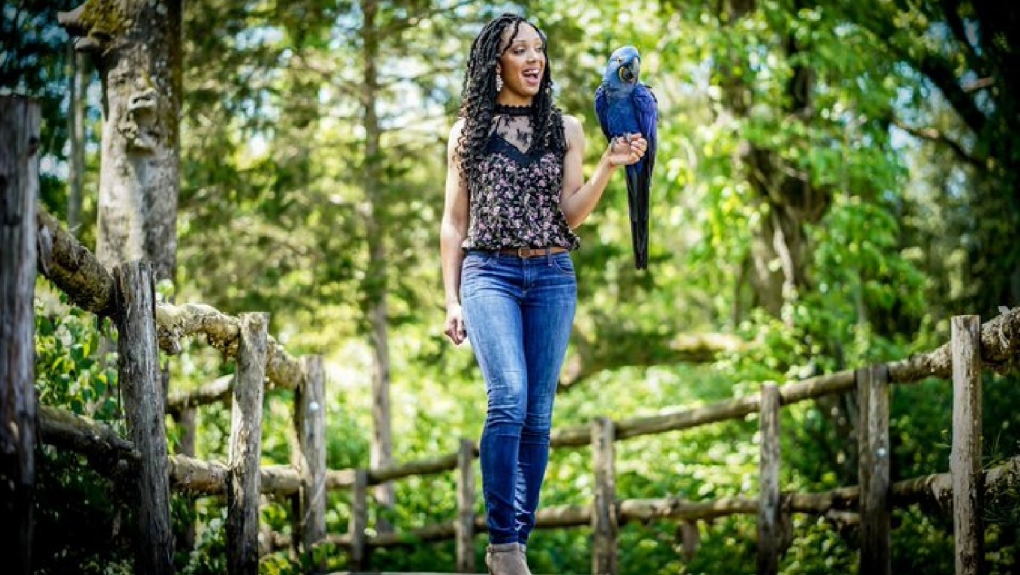 Wildlife conservationist Corina Newsome -- with Tony, a Hyacinth Macaw -- is a part of Black Birders Week. (Corina Newsome via CNN)

Everyone has the bird.

Corina Newsome calls it a gateway bird, the one special species that sets an avian enthusiast on a lifetime course of discovery and environmental passion. Hers was the blue jay.

For Tykee James, it was the belted kingfisher.

When asked what his favorite bird is, Alex Troutman paused. "Can I give you a top three?" The northern crested caracara. The white ibis. And, of course, the penguin.

These young Black naturalists -- and the birds they love -- are some of the stars of Black Birders Week, a series of events and activities designed to highlight Black scientists, scholars and everyday nature lovers. While spreading their joy and knowledge, the countless people involved in the movement are also raising visibility of Black achievement at a painfully critical time.

A painful event is turned into potential

The event was conceived by a group of Black STEM professionals and students who share an online space they call #BlackAFinSTEM.

STEM stands for science, technology, engineering and mathematics, and the dozens of people in the group hail from all different kinds of disciplines within that sphere.

But when Christian Cooper, a Black birder in New York City, was threatened by a white woman in Central Park, their focus turned to the avian-minded among them.

Within days, a group of #BlackAFinSTEM organizers had come up with a whole week's worth of ways to support and encourage the Black birding community.

The Audubon Society, the National Park Service and countless other organizations have boosted their work, introducing social media to a whole realm of cool birds and new discoveries -- and new faces that challenge and change science stereotypes.

"The importance is normalizing the fact that Black people exist in the birding and natural sciences community," says Anna Gifty Opoku-Agyeman, one of the organizers of the event. "People don't understand that Black people exist in other contexts other than the ones they're exposed to. It's to ensure other people see the impact of Black birders and naturalists, and gives them a chance to be seen."

This visibility is a master key that can open all kinds of doors for Black scientists to succeed, and for the world to benefit from their success.

Why is there such an internalized stereotype that Black people aren't interested, or are somehow alien to, nature and the studies therein?

Wildlife biologist Alex Troutman says, in his experience, it's a combination of factors: People growing up in urban areas are exposed to less nature. And the persistent idea that outdoor activities -- like camping, hiking and wildlife appreciation -- are white-dominated pursuits.

"People assume just because we're Black, we don't like the outdoors," he says. "People don't talk about the buffalo soldiers who were among the first to care for national parks. They don't talk about Black ranchers."

Troutman has worked with marine endangered species in Corpus Christi, Texas, for the National Park Service and for the US Fish and Wildlife Service, among other roles. All of this experience, and Troutman says people have still occasionally looked at him with doubt.

"When I was working for the Fish and Wildlife Service, even wearing a uniform, guests would question why I was there. I've had to show them my ID."

This idea that Black people somehow don't belong in the outdoors fuels even more fear.

"Most of my friends are afraid of being harassed or assaulted if they were to leave the city to take in nature, because you hardly ever see Black people camping and enjoying outdoors. And look at what happens to someone like Ahmaud Arbery, who couldn't even run outside."

Troutman considers himself one of the lucky ones. He grew up outside of Atlanta searching for salamanders in the stream that ran through his backyard. He and his brothers, father and uncle would go fishing on the weekends.

But even then, it didn't occur to him that the life he would eventually have -- one filled with turtle rescues and birds of prey and a wealth of wildlife knowledge -- was possible.

"I always thought I would be a vet," he said. "Because that was the only Black person I saw working with animals."

Corina Newsome had a similar experience. She grew up in Philadelphia, loving nature and animals, and assuming that, among the Steve Irwins and Jeff Corwins of the world, the only professional path for someone like her was to become a veterinarian.

She's now a wildlife conservationist, currently working as a field biologist to conserve the MacGillivray's seaside sparrow in coastal Georgia.

Her moment of realization came when a Black woman working at the Philadelphia Zoo invited her to go behind the scenes.

"I had never been to a zoo, and before I saw her in action, it never crossed my mind that I could be a zookeeper," Newsome says. "It's not that I actively thought zookeeping was for white people or that it wasn't for me. It's just where my mind placed it in the understanding of my world."

Before her current work in avian conservation, Newsome did become a zookeeper.

Along the way, she also became a passionate bird enthusiast and advocate for children from underprivileged backgrounds who want to pursue their interests in animals and nature.

"My work brings me so much joy," she says. Seeing nature and wildlife up close still feels brand new and I hope it does for the rest of my life.

The movement hopes for progress -- and job opportunities

While getting people hooked on birds is definitely a goal of Black Birders Week, there's a lot more at stake.

Black people aren't just excluded from natural spaces, they are also historically excluded from the academic and professional spaces they occupy if and when they get a chance to pursue their scientific passions.

The movement's organizers are hoping this visibility, this skeleton key, leads organizations and leaders in the field to pursue cultural and policy changes that open up these white-dominated disciplines.

They also hope it leads to job opportunities for all of the talented people participating.

"This is something that all of us are passionate about, because we are increasing the visibility of a group of Black and brown professionals and we're starting a dialogue," says Anna Gifty Opoku-Agyeman."For us, it's quite an honor to have this pick up steam and gain national attention."

Opoku-Agyeman didn't know much about birding before she started organizing Black Birders Week with other #BlackAFinSTEM members. But as an economist, which is considered a STEM profession, she knows all about exclusivity, and the steps communities of color have taken to give new generations of STEM professionals a better chance at success.

Originally from Ghana, Opoku-Agyeman is a co-founder of the Sadie Collective, named after Sadie Alexander, the first Black woman to earn a Ph.D in economics. The Sadie Collective creates mentorship and professional opportunities so Black women at all stages of their career can become more visible in their field.

And in a field where Black people aren't visible or are excluded, mentorship is everything.

It's what changed Newsome's perception of her potential. It's what Troutman had, in a form, every time he went fishing with his family.

"You can tell me that something's a cool thing," Troutman says. "But what does that mean if I don't see anybody who looks like me, who says, 'Hey, you can be a scientist like me,' who can tell you, 'You don't have to be limited to what your parents or neighborhood say you need to be.'"

The movement has long-term benefits

For some observers, it may seem like an initiative like Black Birders Week is meant solely for the benefit of Black naturalists and those who enjoy their work.

Diversity is its own benefit, a concept proven in disciplines from genetics to, well, economics and natural sciences.

"It's not only good for the people that have historically been excluded, it's good for the field as well," says Newsome.

"When you look at animal populations, you have to have, for instance, genetic diversity so that someone has an answer to a stressor that's to come. It's the same if you have a group who are trying to solve a problem, whether you're a scientists or neighbors. If everyone has had the same life experiences, you're less likely to have the solution to a problem."

And the lenses of race, nature, and the environment are inextricably linked, meaning the diversity of the natural sciences could affect the very future of the Earth.

Tykee James is the Government Affairs Coordinator for the National Audubon Society in Washington, DC, the gold standard for avian conservation and advocacy. He also hosts a series of podcasts about nature and conservation.

In his work, he links environmental and social advocacy with the simple, natural pleasures of bird watching.

"In my opinion, there is not better vehicle for advocacy for a bird," he says. "A migratory bird, a familiar bird you see in the garden. There is a connection between birds and people and place."

That connection between people and place also affects people's wellbeing -- the water they drink, the air they breathe. One needs to look no further than Flint, Michigan, or the communities along the Dakota Access Pipeline to see how environmental policies -- or lack thereof -- affect the very lives of people of color.

So the quest for more representation, for more seats at the table in places of learning and science, in research and government, isn't just about following a passion. It's about the very well being of Black and brown people now, and all people of future generations.

On top of it all, no one could have predicted that Black Birders Week would coincide with one of the most painful racial episodes in recent American history.

"We can't even organize for one Black trauma before another one happens," BlackAFinSTEM tweeted as Black Birding Week got underway.

"It's very easy for me to get cynical with a bunch of friends and stamp out or overlook or minimize any progress we've had or any momentum that we've gained," says James.

"It's very easy to lose that when an interaction with a police officer can be the last description for the rest of my life. It's hard to not be cynical when I know that an environmental regulation that was saving lives yesterday can be overturned today."

"When I'm in that cynical mindset," he says, "The only thing that gets me out is the joy and unapologetic strength and style of Black birders."

So as protests roil, the country contends yet again with the deeply-entrenched racism that has led to Black scientists being excluded, to Black nature lovers feeling unsafe, to a minor disagreement in the park ending in a racially loaded call to police, and a Black man being killed on the Minneapolis pavement.

During this dark time, James says the joy and knowledge of Black birders is a reminder that, while it is very present, the Black experience isn't just rooted in trauma.

The Black experience is also about witnessing a sea turtle nesting for the first time on a drive along the Texas coast, as Troutman did.

It's in protecting species and environments the world can't afford to lose, like Newsome and James do.

In their advocacy work, it's about straightening the path for those who want to follow joyfully in their footsteps.

And as these nature lovers live their fullest experiences, they hope others will see them, and realize they can too.

Police probe motive after officer stabbed in the neck in NYC