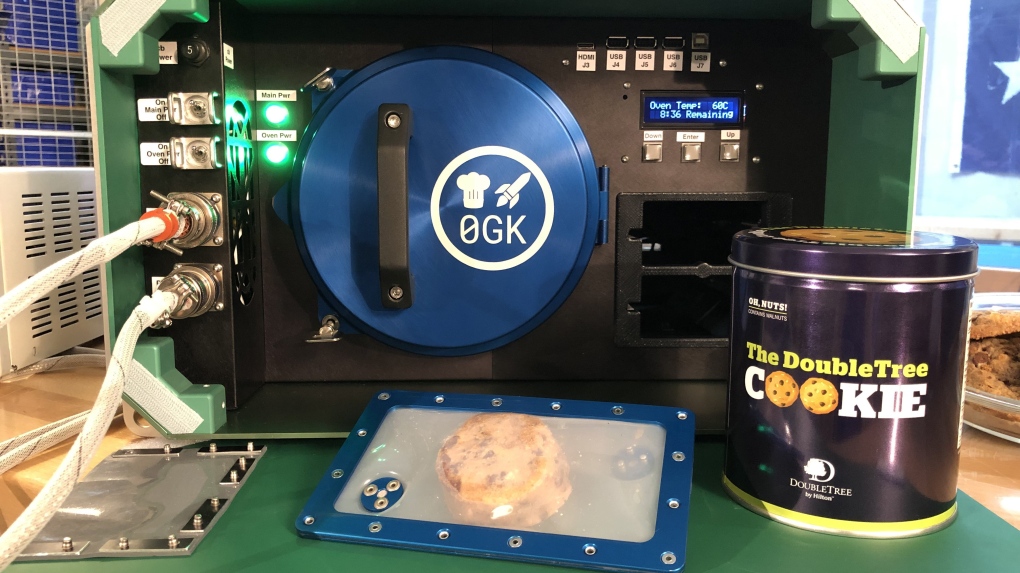 The Zero G Kitchen space oven and a tin of DoubleTree by Hilton chocolate chip cookies were sent up to the International Space Station. (Hilton/DoubleTree)

Typically, this is good advice, but for the astronauts aboard the International Space Station, tasked with baking the first batch of cookies in space, it may be tough to follow.

And understandably so. For the last year and a half, husband and wife duo Ian and Jordana Fichtenbaum, founders of Zero G Kitchen, have been developing the first zero-gravity oven that could revolutionize space food and bring a taste of home to astronauts who dearly miss it. Last week, the oven arrived at the space station. No date has yet been announced for it to be tested.

The Fichtenbaums' mission is both simple and highly technical: "We want to build a kitchen in space, one piece at a time, and partner with companies, educators and researchers all along the way," said Ian Fichtenbaum.

Designing an oven capable of baking space cookies is no easy feat. Everyday tasks are more difficult in space, which lacks the force of gravity to keep objects from floating around -- and baking presents its own unique challenges. Traditional convection ovens function by utilizing gravitational properties; "the hot air rises, the cool air falls," explained Abby Dickes, Nanoracks' marketing director.

Then there's the challenge of keeping food secure and stationary while it bakes. To complicate things further, the oven must run on a limited power supply, so as not to blow a fuse on the space station.

But the zero-gravity oven was designed to circumvent these issues. It's composed of a sleek, cylindrical chamber that houses an insertable silicone frame, which surrounds the food to hold it in place. Cylindrical heating coils focus the heat on the food in the center of the chamber and rise to temperature much more slowly than traditional ovens, to accommodate the power constraints.

"The oven went through a few different iterations, but the final creation ended up being very chic, very beautiful, and now it's up on the space station ready to bake some DoubleTree cookies -- and hopefully after that, all kinds of other creations," says Ian Fichtenbaum.

What might those other creations be? "Right now it's best to stick with things that are patty-size and shape -- a roll, a meatball," said Jordana Fichtenbaum.

But first, cookies. The irony, of course, is that the cookies are not technically meant to be eaten. They are, after all, the product of a science experiment and, what's more, one that's never been conducted before.

"The top priority for everyone who works on the space station is the safety of the crew on board," said Dickes. Some cookies will be reserved for analysis. For the rest, taste-testing will be at the baker's discretion.

For astronauts who choose to eat the cookies, the real question will be whether they taste just as good as those you get at any DoubleTree here on Earth. While the proof will be in the pudding, Dickes has high hopes.

"You have to start with great ingredients, which we know we're doing because we've eaten far too many of these cookies," she said. "I think they're going to look different -- like more of a spherical blob shape, which honestly just sounds gooey and delicious."

But just in case the first batch doesn't turn out to be edible, a tin of pre-baked DoubleTree cookies was sent up to the space station along with the oven.

The shape of the cookie may lend itself perfectly for this experiment, but that's not the only reason it was chosen for the zero-gravity oven's maiden voyage.

Oh yeah, and it's delicious.