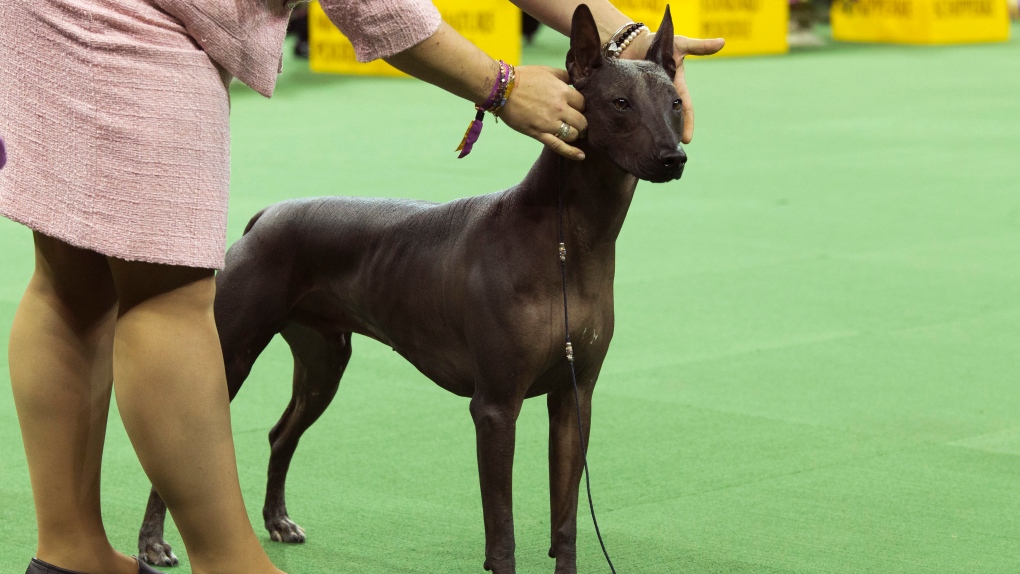 In this Feb. 15, 2016, file photo, a xoloitzcuintli is shown in the ring during the non-sporting group competition at the140th Westminster Kennel Club dog show, at Madison Square Garden in New York. (AP Photo/Mary Altaffer)

NEW YORK -- A new study provides fresh evidence that the first dogs of North America all but disappeared after the arrival of Europeans.

The only surviving legacy appears to be a cancer that arose from the cells of a dog that lived more than 8,000 years ago and has since spread to other canines throughout the world, an international team reported Thursday in the journal Science.

Researchers compared the genomes of ancient and modern American dogs. Results confirm that the first domesticated dogs of North America arrived with people from Asia over the same Bering land bridge used much earlier by humans. These dogs thrived for thousands of years, but mostly vanished after contact with Europeans. Scientists don't know why they disappeared.

"I just find it really surprising," says geneticist Elinor Karlsson from the University of Massachusetts Medical School in Worcester, who did not participate in the study. "There were millions and millions of dogs all over the continent (that) died out after the Europeans arrived. And the fact that we don't know anything about it is kind of a big hole."

In an attempt to fill in the historical gaps, researchers sequenced the genetic material of 71 dog remains collected from bones found in Siberia, the United States and Mexico.

When they compared it to the genetic makeup of modern pooches, they confirmed what other scientists have long suggested: The first dogs of North America, similar to Arctic dogs like Siberian huskies or Alaskan malamutes, were brought to the continent when people crossed the land bridge that formed between Russia and Canada. It's not known when the dogs first arrived.

For Elaine Ostrander, a canine genetics expert from the National Institutes of Health in Bethesda, Maryland, this finding reveals something about our own behaviour.

"Where people go, so go their dogs," said Ostrander, who was not part of the study. "This study reinforces that idea and takes it back to nearly the beginning of dogdom."

Researchers could not find any trace of ancient dog DNA in modern-day village dogs from South America or pre-Columbian breeds like the xoloitzcuintli, the Mexican hairless dog. Less than 4 per cent of the genome of modern American dogs can be traced back to those that lived before the Europeans came, the study found.

The indigenous dogs did appear to leave a genetic legacy: a rare dog cancer known as canine transmissible venereal tumour, or CTVT, that affected a single dog several thousand years ago.

"It's the closest remaining vestige of this lost dog lineage," co-author Elizabeth Murchison, a geneticist at the University of Cambridge in the United Kingdom, said in an email.