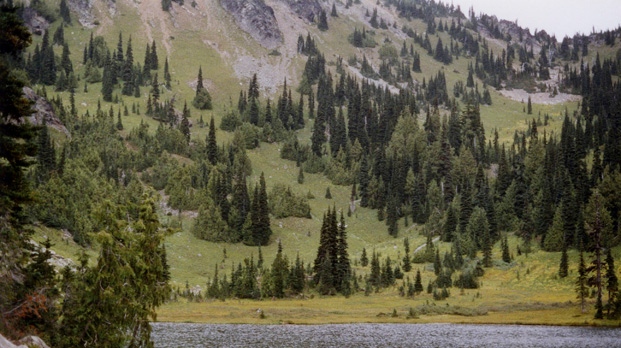 ANCHORAGE, Alaska -- A type of tree that thrives in soggy soil from Alaska to Northern California and is valued for its commercial and cultural uses could become a noticeable casualty of climate warming over the next 50 years, an independent study has concluded.

Yellow cedar, named for its distinctive yellow wood, already is under consideration for federal listing as a threatened or endangered species.

The study published in the journal Global Change Biology found death due to root freeze on 7 per cent of the tree's range, including areas where it's most prolific. It cited snow-cover loss that led to colder soil.

Additional mortality is likely as the climate warms, researchers said.

By 2070, winter temperatures in about 50 per cent of the areas now suitable for yellow cedar are expected to rise and transition from snow to more rain, according to the study.

Yellow cedar began to decline in about 1880, according to the U.S. Forest Service, and its vulnerability is viewed as one of the best-documented examples of climate change's effect on a forest tree.

The trees are in the cypress family and are not true cedars, which are part of the pine family. They have grown to 200 feet and can live more than 1,200 years.

Tlingit, Haida and Tsimshian people used yellow cedar for canoe paddles, tool handles and totem poles. They can harvest a lengthwise strip of bark from a living tree for weaving baskets and hats, and as backing in blankets. The tree can compartmentalize the injury and continue growing.

The slow-growing trees historically found a niche near bogs. Those wetlands provided openings in the forest canopy but poor soil rejected by other trees.

"Elsewhere, it (yellow cedar) generally gets out-competed by spruce, which grows faster, or hemlock, which can grow in lower light conditions," Buma said.

The study by Alaska, Washington, California and British Columbia researchers documented the magnitude and location of yellow cedar mortality in Canada and the United States.

More than 1,544 square miles containing yellow cedar -- mostly north of Vancouver Island, British Columbia -- have experienced upward of 70 per cent mortality. Another 20,207 square miles remain, but many of the trees will be vulnerable if projected warming occurs.

Researchers found little mortality in trees at higher elevations in Washington and Oregon where snow level has not diminished and roots have not been exposed to freezing temperatures. Conversely, in some areas, such as parts of Vancouver Island, there's no snow where yellow cedar grows, but temperatures never drop sufficiently to freeze their roots, Buma said.

The agency has begun a tree atlas, currently listing 134 species, that documents their current and possible future distribution under climate change projections.

A U.S. Fish and Wildlife Service decision on listing yellow cedar as threatened or endangered is scheduled for September 2019, spokeswoman Andrea Medeiros said.

Owen Graham, executive director of the Alaska Forest Association, a timber industry trade group, remains opposed to a listing. Yellow cedar die-off in the last century has been intermittent and natural, he said. Trees that died were replaced by new trees.

"The whole thing is just a stupid effort to try to tangle up the timber supply some more," he said. "It's ludicrous."