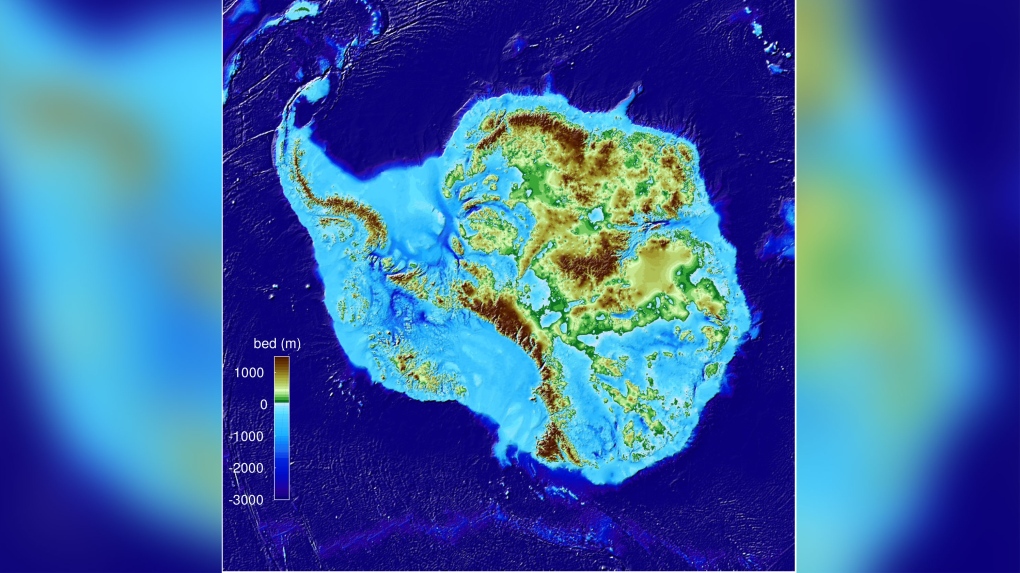 A new study shows that the deepest point on land is under the Denman Glacier in East Antarctica. (Dr. Mathieu Morlighem)

A new study shows that the deepest point on land is under the Denman Glacier in East Antarctica. Glaciologists at the University of California, Irvine, were mapping the area only to find that the trough under the glacier went far deeper than they had imagined.

The trough is about 3.5 km (about 2 miles) below sea level but there is no ocean water there. Instead, it is filled with ice flowing from the interior of the ice sheet towards the coast. The trough measures about 100 km in length and is 20 km wide, according to the study.

This new discovery was presented at the American Geophysical Union's Fall Meeting in San Francisco.

Dr. Mathieu Morlighem, an associate professor in the Department of Earth System Science at the University of California at Irvine, is leading this project.

"The biggest challenge about the project is that Antarctica is HUGE!" he said, excitedly. "It's bigger than the U.S. and Mexico combined."

Morlighem and his team used a new technology called BedMachine to make this discovery. They developed a new generation ice sheet model but it was not behaving as expected.

"After months of investigation, we realized that it was not because we were missing important processes. It was because the bed topography under the ice was missing many important features such as troughs, ridges, valleys, etc," he said.

And because of the size of the area they were trying to map, the process was very time-consuming.

The team combined radar measurements with high-precision surface motion data from satellites and snow accumulation from regional climate models to get a good estimate of the shape of the bed where it had not been measured.

"We applied this mapping technique to the entire ice sheet, and we discovered this very deep valley hidden underneath the ice sheet," Morlighem said.

He said one of the challenges they faced during the project was gathering all the available data since there have been many radar surveys, but done by different institutions in different countries.

They also had some surprises on the way.

"The main ones are these ridges across the Transantarctic Mountains, Denman glacier, but also some other glaciers feeding the Ronne Ice Shelf that seem to be more vulnerable than we thought," Morlighem said.

"We now have to monitor this glacier carefully. If its grounding line -- where the ice starts to float -- starts to retreat in this deep canyon, it could retreat rapidly due to a mechanism called Marine Ice Sheet Instability." he said. "Glaciers that flow on beds that deepen inland are unstable, and so the glacier will potentially have to retreat all the way until the bed rises again, leading to significant sea level rise. It could be one of the most vulnerable sectors of East Antarctica, which holds significantly more ice than west Antarctica."

But there is good news as far as climate change goes. The study says that major glaciers flowing through the Transantarctic Mountains and across Victoria Land are found to be protected by broad, stabilizing, topographic ridges near their grounding lines that reflect the surrounding topographic relief.

"The glaciers flowing across the Transantarctic Mountains all have a pronounced ridge across their troughs," Morlighem said. "These ridges were unknown and make this sector of the ice sheet extremely resilient to increase in ocean-induced melting."

In other words, he said, "If the Ross Ice Shelf destabilizes, it should not lead to a collapse of East Antarctica."