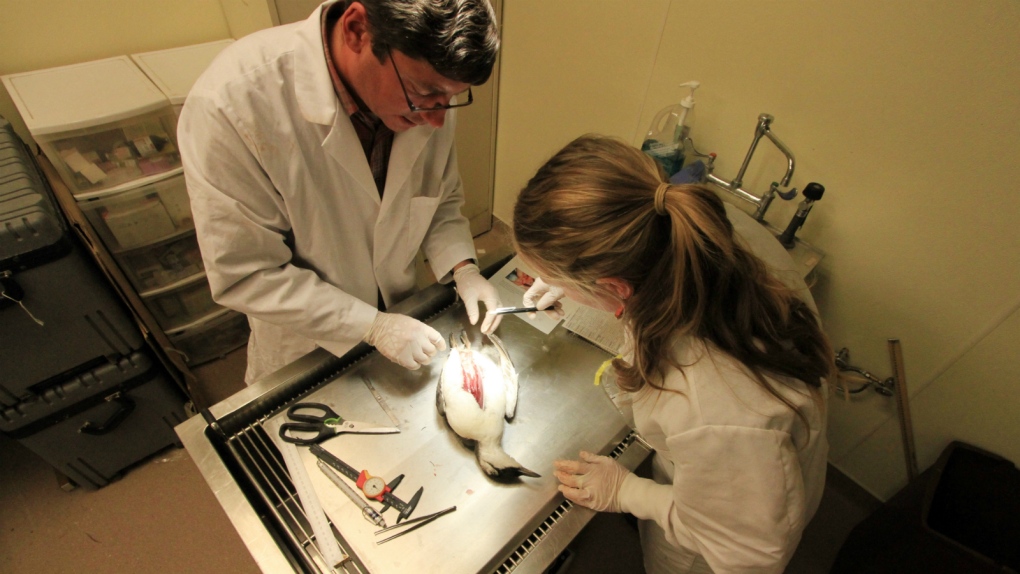 Wildlife biologists Rob Kaler of the U.S. Fish and Wildlife Service and Sarah Schoen of the U.S. Geological Survey examine body parts of a common murre during a necropsy in Anchorage, Alaska on Friday, March 11, 2016. (AP / Dan Joling)

Measurements of its beak and leg indicated it hatched in June. Its stomach and breast showed how it died. The 3-inch-long stomach was empty, and the pectoral muscles that powered its wings, allowing it to "fly" underwater after forage fish, were emaciated.

"As the bird starves, the body eats the muscle for energy," Schoen said. "The muscle becomes more and more concave."

Common murres are one of the northern hemisphere's most common seabirds. The Alaska population is estimated at 2.8 million out of a world population of 13 to 20.7 million birds. Awkward on land, common murres can dive to 600 feet hunting fish or krill.

Die-offs have occurred before but not on this magnitude. Common murres routinely live 20-25 years but have a metabolism rate so high that they can use up fat reserves and drop to a critical threshold for starvation, 65 per cent of normal body rate, in three days of not eating.

The confirmed carcass count is now up to 36,000, Schoen said. That's far higher than previous common murre die-offs and many beaches have not been surveyed.

New common murre carcasses continue to be recorded, most recently on Kodiak, Alaska Peninsula communities and the Pribilof Islands.

"The ravens and eagles make it easy to see that birds are continuing to die and get washed up," Kaler said. The scavengers eat the dead murres.

No one is offering an estimate of the total deaths. In previous die-off, researchers estimated that only about 15 per cent of carcasses reach shores, which means the total may be in the hundreds of thousands.

The USGS's National Wildlife Health Center in Madison, Wisconsin, is testing murres for signs of disease or parasites. Though the murres appear to have starved, researchers wonder if something caused them to quit eating or to be less successful funding food.

Schoen and Kaler were looking for broad, general information about body conditions.

Sudden diet changes could be telling. If they were eating at one level of the food web, and a regular food source became unavailable, it could provide insight into the deaths, Schoen said.

Some details are emerging.

Schoen in January necropsied 61 birds found in Prince William Sound. Most were birds under 2 years old and 77 per cent were female. Female deaths are significant because of the possible effect on the overall population.

The sampled birds also were heavier than birds sampled in a 1993 die-off, Schoen said.

"So it doesn't look like just starvation is killing them," Schoen said. "It looks like there's something else that could be tipping them over the edge."

Federal agencies don't have dedicated funding to solve the common murre mystery but will continue investigating as time allows. Schoen and Kaler said they hope to continue the sampling work with carcasses collected from other areas of Alaska.