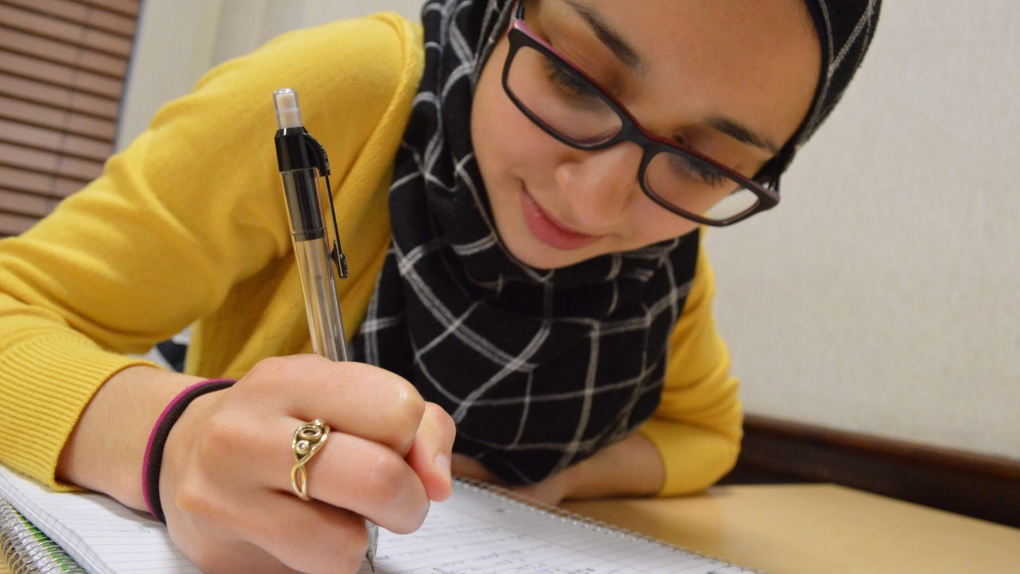 Tasneem Essader studies at a residence hall at the University of North Carolina in Chapel Hill, N.C., on Dec. 2, 2017. (Gabriel Lima via AP)

DETROIT -- When it came to pursuing a scientific career, Tasneem Essader encountered forces pulling her in and pushing her away: She drew inspiration from her mother's work in chemistry, but initial discouragement from her engineer father, who thought she should do something else. She was inspired by women engineers she met, but found few girls around her in advanced high school science classes.

Essader, who feels strongly connected to her Muslim faith, also struggled to find the right fit among an array of identity-based scholarships as she looked to help ease the financial burden of college.

Then, an uncle informed her about the Adawia Alousi Scholars program, and the obstacles started to fall away. She found that fit, and a kinship with the scholarship program's namesake.

"After reading about Dr. Alousi's life, I felt like the struggles I faced because of who I am in the field I want to pursue have been validated," Essader wrote in her essay application, "that someone who has gone through the same struggles as I have and has something about it to make it easier for future generations."

The scholarship, established at the Dearborn, Michigan-based Center for Arab American Philanthropy with money from Alousi's family trust, is believed to be the first of its kind for Muslim-American women studying science, technology, engineering and mathematics. Essader is in the inaugural class of 11 recipients of the scholarship, named after a scientist who helped develop a pioneering drug treatment for congestive heart failure in the 1980s.

Alousi, who died in 2010, was an Iraq-born Muslim who had to fight to earn recognition in a male-dominated field. She wanted money from her trust to go toward charity.

"We reflected upon who my aunt was, what she would want. She was most passionate about her science and Islam -- the scholarship reflects those passions," said nephew Amin Alousi, an associate professor of medicine at the University of Texas' MD Anderson Cancer Center.

Alousi said his aunt's pharmacological research was the backbone for a new class of drugs for congestive heart failure -- and she and her colleagues were the first to bring such drugs to market. Still, he added, she faced discrimination being "a foreign-born woman."

"She really did have to be vocal," Alousi said. "On all the scientific papers, she insisted on being recognized as a lead author."

Alousi said the scholarship includes grade requirements but he added, "We want people with a compelling story," including "overcoming hardships."

Essader, a freshman at the University of North Carolina, wants to "carry forward Dr. Alousi's spirit by breaking the stereotypes surrounding people who look like me." Essader says her father has grown more encouraging as he sees her passion for her intended career in biomedical engineering.

Another recipient, Teeba Jihad, said her "family was under attack" in her native Iraq as members of the Shiite sect of Islam during wartime. After coming to the U.S. at age 11, she faced name-calling and criticism for her modest clothing. Jihad, who had a cancer scare in 2013, is studying biomolecular science at New York University and has worked in a lab to develop breast cancer treatments using magnetic, nanoscale particles. The scholarship, she wrote, allows her to "continue to create a positive image of young Muslim females."

"The bigger narrative of how often people in the West or in the United States wrongly assume Muslim women are uneducated, not successful, or not outspoken -- I think that's the bigger story that we hope to overcome with this scholarship and the young women it supports," he said.