Researchers say these 8,500-year-old human teeth were used in jewelry 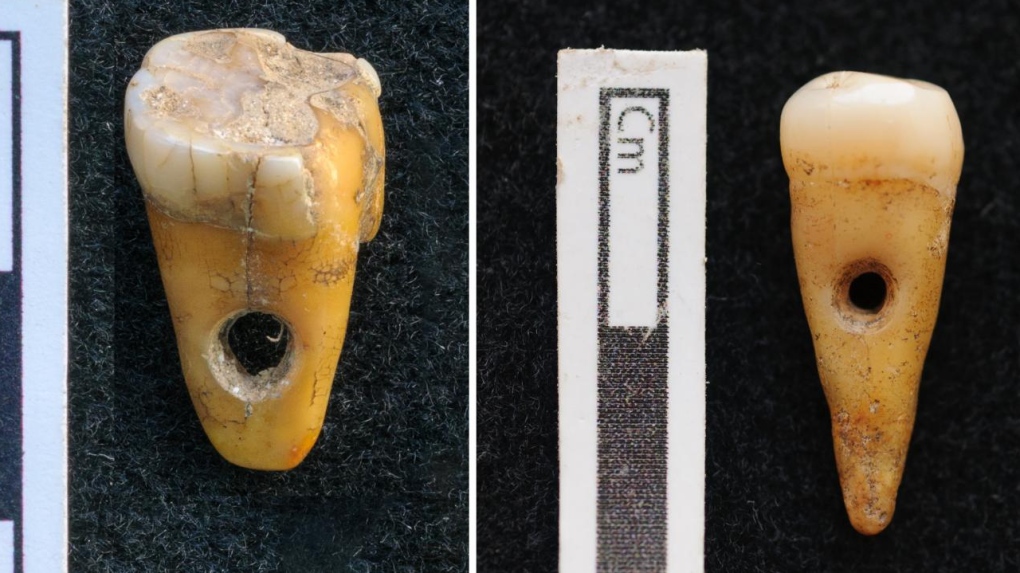 This image shows the teeth that were found by researchers, containing neatly drilled holes. (University of Copenhagen)

TORONTO -- Researchers have discovered human teeth that they believe was used in jewelry worn by prehistoric humans over 8,500 years ago, a practice which they say has never been documented in that era and location before.

Between 2013 and 2015, researchers carried out excavations at the Neolithic site of Catalhoyuk in Turkey, according to a press release put out this week by the University of Copenhagen. There, they found a couple of adult human teeth that had one shared trait: they each had a small hole carefully drilled through them.

Further research showed that the teeth had likely been used as pendants in jewelry.

University of Copenhagen archeologist Scott Haddow, one of the researchers who contributed, said in the press release that “not only had the two teeth been drilled with a conically shaped microdrill similar to those used for creating the vast amounts of beads from animal bone and stone that we have found at the site, but they also showed signs of wear corresponding to extensive use as ornaments in a necklace or bracelet.”

The holes were drilled into the long root of the tooth. The teeth were fully intact, with no breakage or decay from disease, leading researchers to believe that the teeth did not fall out on their own.

They were likely taken from the skulls of individuals who were already dead.

“The wear on the teeth's chewing surfaces indicates that the individuals would have been between 30-50 years old,” Haddow said.

The full research article was published in Journal of Archaelogical Science.

Human teeth being used for jewelry or ornamentation isn’t new, but this specific find is rare for the location and time period. Previous discoveries of ornamental human teeth have been focused in European sites from the Upper Paleolithic as well as the Neolithic, but never in the “Near East” region, a term that refers to what is now called the Middle East.

Researchers believe that the usage of the teeth as jewelry pieces was likely not just for “aesthetic purposes,” but actually because they “carried profound symbolic meaning for the people who wore them,” Haddow said.

Because they only discovered two teeth with these distinctive holes drilled in them, researchers don’t have enough yet to fully probe the meaning behind them.

But Haddow mentioned that while animal bones and teeth show up in pendants and beads decorating human bodies at burial sites, the human teeth were not found in a burial context, “indicating that it seems to have been a deliberate choice not to include items made from human bone and teeth with burials.”