Plant a tree: Milan's ambitious plans to be cleaner, greener 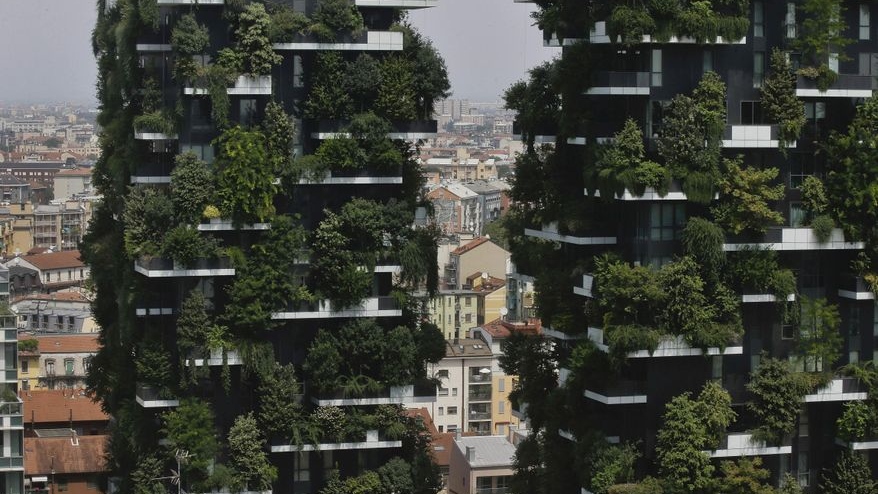 In this picture taken on Aug. 3, 2017 a partial view of the vertical forest residential towers at the Porta Nuova district, in Milan, Italy. (AP Photo/Luca Bruno)

MILAN -- If Italy's fashion capital has a predominant colour, it is grey -- not only because of the blocks of neoclassical stone buildings for which the city is celebrated, but also due to its often-grey sky, which traps pollution.

But Milan now wants to shift its colour palette toward green.

The city has ambitious plans to plant 3 million new trees by 2030 -- a move that experts say could offer relief from the city's muggy, sometimes tropical weather.

Some ad-hoc projects have already contributed to environmental improvements. Projects like architect Stefano Boeri's striking Vertical Forest residential towers, completed in 2014 near the Garibaldi train station, aim to improve not only air quality but the quality of life for Milan residents.

Boeri created a small island of greenery in the heart of Milan, his pair of high-rises brimming from every balcony with shrubs and trees that absorb carbon dioxide and PM10 particles, a pollutant with links to respiratory ailments and cancer.

"I think the theme of forestation is one of the big challenges that we have today. It is one of the most effective ways we have to fight climate change, because it is like fighting the enemy on its own field," Boeri said. "It is effective and it is also democratic, because everyone can plant trees."

The U.N. climate summit taking place now in Poland has urged cities and regions to help achieve the goals of the 2015 Paris agreement on curbing global warming, which include limiting the increase in the planet's temperature to 2 degrees Celsius (3.6 degrees Fahrenheit) this century.

Milan officials estimate the program to boost the number of trees by 30 per cent in the broader metropolitan area will absorb an additional 5 million tons of carbon dioxide a year -- four-fifths of the total produced by Milan -- and reduce harmful PM10 small particulates by 3,000 tons over a decade. Significantly, it would also reduce temperatures in the city by 2 degrees Celsius, they say.

Boeri said the current green canopy of the Lombard region's capital is just 7 per cent of the urban area. That's well below northern European cities like Germany's Frankfurt at 21.5 per cent or Amsterdam at nearly 21 per cent. It's closer to Paris at nearly 9 per cent, according to the World Economic Forum's Green View Index -- and the French capital itself has been battling for years to fighting rising air pollution.

By 2030, Milan hopes to increase that green canopy number to between 17 and 20 per cent.

Damiano Di Simine, the scientific co-ordinator in Lombardy for the environmental group Legambiente, said potentially the biggest impact of the green Milan project will be to lower temperatures in a city where the nighttime temperature can be 6 degrees Celsius (10.8 degrees Fahrenheit) higher than in the surrounding area. City statistics show that Milan endures 35 tropical nights a year.

Because it lies close to the Alps, Milan see very little wind to clear pollutants that become blocked in by temperature inversions, where a layer of cool air is covered by a layer of warmer air.

"The lack of wind also accentuates the urban heating," Di Simine said. "It means the discomfort from thermic inversions is terrible, because the climate is very stationary. Planting trees will help this."

The project to make Milan greener includes an ambitious plan to transform a disused freight railway network into a series of seven parks, with 25,000 new trees every year. It also includes planting greenery on 10 million square meters (108 million sq. feet) of flat rooftops and planting trees in 2,300 school courtyards.

Other new green spaces already inaugurated include Boeri's Library of Trees, near the Vertical forest, which includes 450 trees and 90,000 plants on nearly 10 hectares (24 acres), including a children's playground and a dog park. The Fondazione Feltrinelli also plans to create a park of 3,300 square meters (35,520 sq. feet) with plantain, magnolia, cherry and pear trees near its new headquarters.

The Vertical Forest has attracted more than 20 species of birds, which Boeri said they did not expect. And the shade provided by the 800 trees, 4,500 shrubs and 15,000 plants mean that the residents rarely have to put on air conditioning, even during the peak of Milan's clammy summers. The Vertical Forest's total greenery has the capacity to absorb 30 metric tons of carbon dioxide every year, Boeri said.

"There are also other advantages that are less measurable but I believe that the presence of green and trees has a very important effect on health and psychological state of mind, as it has been proved," said Boeri.

The architect is taking the award-winning concept to other cities, including Paris, Nanjing in China and the Dutch city of Eindhoven.