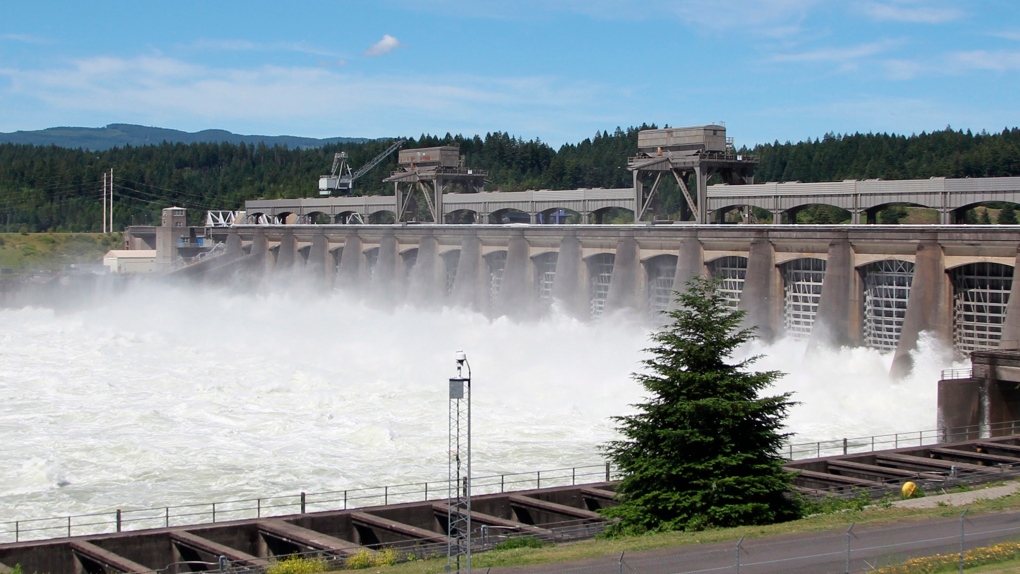 THE DALLES, Ore. - Two Pacific Northwest tribes on Monday demanded the removal of three major hydroelectric dams on the Columbia River to save migrating salmon and starving orcas and restore fishing sites that were guaranteed to the tribes in a treaty more than 150 years ago.
The Yakama and Lummi nations made the demand of the U.S. government on Indigenous People's Day, a designation that's part of a trend to move away a holiday honouring Christopher Columbus.
Tribal leaders said at a news conference along the Columbia River that the Treaty of 1855, in which 14 tribes and bands ceded 11.5 million acres to the United States, was based on the inaccurate belief that the U.S. had a right to take the land because of a Christian mandate.
Under the treaty, the Yakama Tribe retained the right to fish at all their traditional sites. But construction of the massive concrete dams decades later along the lower Columbia River to generate power for the booming region destroyed critical fishing spots and made it impossible for salmon to complete their migration.
After a song of prayer, Yakama Nation Chairman JoDe Goudy spoke at the site of now-vanished Celilo Falls near The Dalles, Oregon, and said the placid Columbia River behind him looked "like a lake where we once saw a free-flowing river."
"We have a choice and it's one or the other: dams or salmon," he said. "Our ancestors tell us to look as far into the future as we can. Will we be the generation that forgot those who are coming behind us, those yet unborn?"
Celilo Falls was a traditional salmon-fishing site for the Yakama for centuries, but it was swallowed by the river in 1957 after the construction of Dalles Dam.
There have been calls by environmentalists and others over the years to remove Columbia River dams, an idea opposed by agricultural and business interests.
The three dams operated by the U.S. Army Corps of Engineers are a critical part of a complex hydroelectric network strung along the Columbia and Snake rivers in Oregon, Washington and Idaho that powers the entire region.
Government officials were unavailable for further comment Monday due to the holiday.
The Lummi Nation is in northwestern Washington state, far from the Columbia River, but it has also been touched by construction of the dams, said Jeremiah Julius, Lummi Nation chairman.
Chinook salmon are the preferred prey of endangered orcas but just about 70 orcas remain in the Pacific Northwest -- the lowest number in three decades -- because of a lack of chinook, as well as toxic contamination and vessel noise. The orcas were hunted for food for generations by the Lummi Nation in the Salish Sea, he said.
"We are in a constant battle ... to leave future generations a lifeway promised our ancestors 164 years ago, he said. "Our people understand that the salmon, like the orca, are the miner's canary for the health of the Salish Sea and for all its children.
"I choose salmon," he added. "I will always choose salmon."
Fish ladders built into the dams allow for the passage of migrating salmon and migrating fish are hand-counted as they pass through. But the number of salmon making the arduous journey to the Pacific Ocean and back to their natal streams has declined steeply in recent decades.
The Columbia River Basin once produced between 10 million and 16 million salmon a year. Now there are about 1 million a year.
The Bonneville Dam was constructed in the mid-1930s and generates enough electricity to power about 900,000 homes -- roughly the size of Portland, Oregon. Dalles Dam followed in the 1950s and John Day Dam was completed in 1972.
Environmental groups applauded the tribes' demand and said efforts to save salmon without removing the dams aren't working because without the free flow of the Columbia, the entire river ecosystem is out of balance.
"The stagnant reservoirs behind the dams create dangerously hot water, and climate change is pushing the river over the edge. Year after year, the river gets hotter," said Brett VandenHeuvel, executive director for the non-profit group Columbia Riverkeeper. "The system is broken, but we can fix it."