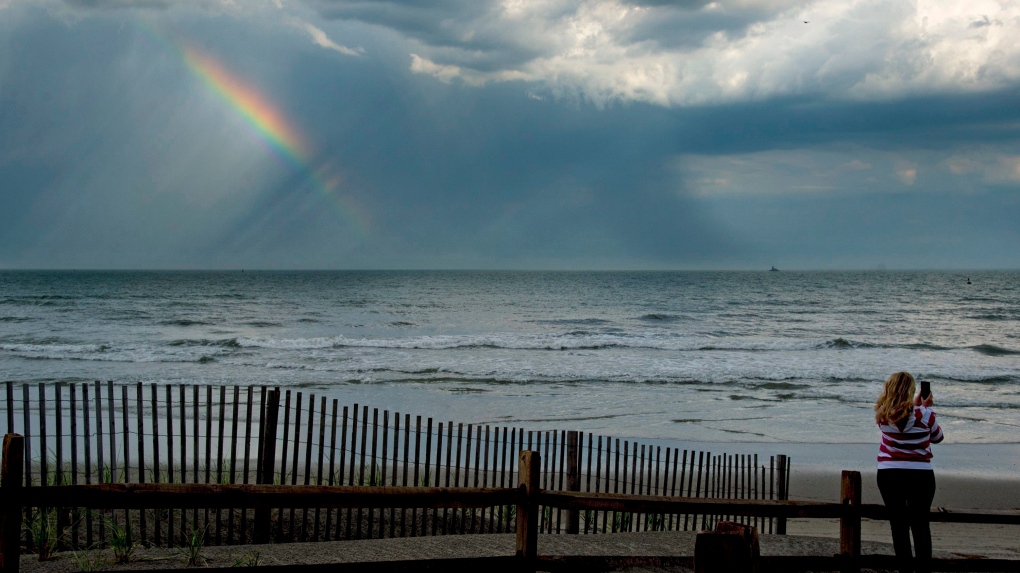 In this Tuesday, June 5, 2018 photo, Kristal Painter, of French Lick, Ind., pauses on the beach to photograph a rainbow over the ocean after a rain storm passed through Atlantic City, N.J. (Tim Gralish/The Philadelphia Inquirer via AP)

Scientists are warning that bad math may have compromised a recent study looking at the effect global warming is having on the world’s oceans.

The study, which was published earlier this month, found that the amount of heat energy absorbed by the oceans in each of the past 25 years was equivalent to 150 times the amount of electricity produced each year on a worldwide basis.

That finding, which was 60 per cent higher than any previous estimate, was based on measurements of oxygen and carbon dioxide in the atmosphere.

In a note dated Nov. 9 and posted to the Scripps Institution of Oceanography website, study co-author Ralph Keeling said two “problems” had been brought to his attention since the study was published.

“These problems, related to incorrectly treating systematic errors in the O2 measurements and the use of a constant land O2:C exchange ratio of 1.1, do not invalidate the study’s methodology or the new insights into ocean biogeochemistry on which it is based,” Keeling said.

“We expect the combined effect of those two corrections to have a small impact on our calculations of overall heat uptake, but with larger margins of error.”

Corrections will be submitted to Nature, the same journal that published the paper, Keeling said.

The errors noted by Keeling have no bearing on recent findings by the Intergovernmental Panel on Climate Change that 90 per cent of the planet’s temperature rise has been absorbed by the oceans.

The IPCC has said that drastic measures will be necessary to limit global warming to 1.5 C by the end of the century.