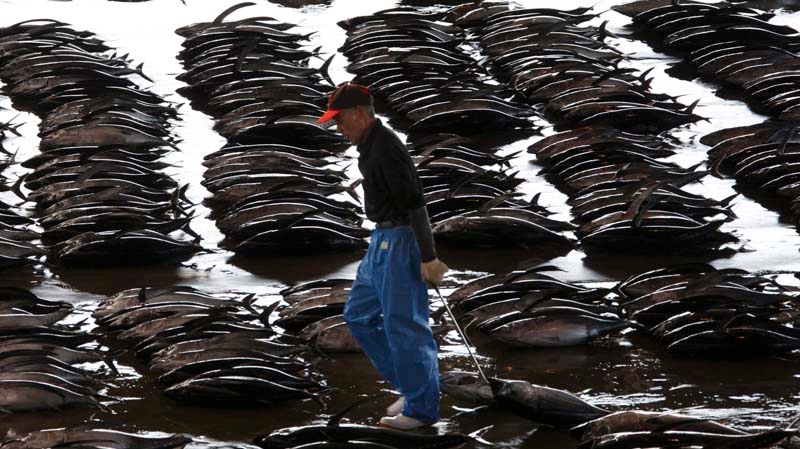 In this Friday, March 26, 2010 file photo, a local fisherman carries a tuna at a fishing port in Nachikatsuura, southwestern Japan. After defeating a proposal in 2010 to ban the export of an endangered fish that is a key ingredient of sushi, Japan and Asian nations argued it should be left to quota-setting international fisheries bodies to bring the species back from the brink. (AP / Koji Sasahara- File)

DUBAI, United Arab Emirates -- After defeating a proposal in 2010 to ban the export of an endangered fish that is a key ingredient of sushi, Japan and Asian nations argued it should be left to quota-setting international fisheries bodies to bring the species back from the brink.

Two years on, their strategy for rebuilding stocks of Atlantic Bluefin tuna appears to be working.

Thanks in part to a sharp reduction in the amount of fish legally caught, the bluefin population in the Atlantic is on the rebound though "the magnitude and speed of the increase vary considerably," according to a stock assessment by scientists released ahead of the annual International Commission for the Conservation of Atlantic Tunas which starts Monday in Morocco.

"We have been working and campaigning on the issue of bluefin tuna for 12 years so to finally see signs of a recovery trend is good news", said Sergi Tudela, head of the fisheries program at WWF Mediterranean.

"We need to see how the recovery trend progresses over time," he said. "In the meantime, we cannot lower our guard, management efforts need to be maintained and even strengthened. Bluefin tuna fisheries management will not become a success overnight."

Environmentalists are calling on the 48 nations in ICCAT to endorse scientific recommendations to keep the current quotas of 14,200 tons a year intact for the next three years. They will also be pushing for increased protection for other threatened species, including shortfin mako and porbeagle sharks as well as blue marlin and white marlin.

"This year is really a test year for ICCAT," said Amanda Nickson, director of the Global Tuna Conservation Campaign at the Pew Environment Group.

"The stock assessment results seem to indicate there may be the possibility of a glimmer of recovery but it's so uncertain at the moment," she said. "This is the first year where they will have to stick to science even if does look like there is a bit of good news. So it's important from our perspective we retain pressure on governments at ICCAT to listen to that science. Our key message is hold those quotas where they are."

Lax quotas at ICCAT and rampant overfishing - much of it illegal - resulted in the stocks of bluefin falling by 60 percent from 1997 to 2007. Amid fears the fish was on the brink of extinction, environmentalists argued at the 175-nation Convention on International Trade in Endangered Species, or CITES, in 2010 that only a trading ban would protect the fish.

But the Japanese government and fishing industry argued successfully that an outright trading ban was too drastic a step, and that catch quotas set by ICCAT should be more strictly enforced to protect the species. Fishing nations from Asia, Africa, Latin America and the Caribbean joined the call to shift the debate to ICCAT, contending that any ban would damage their fishing communities and that fears of the stock's collapse were overstated. Japan is the world's largest exporter of bluefin.

In November 2010, ICCAT cut the annual global quota by 40 percent to 14,900 tons and since then reduced it to 14,200 tons a year later. There has also been increased enforcement which has helped reduce illegal fishing - though it remains a problem - and the growth of farm-bred tuna in Japan which has helped meet the demand.

Most key fishing nations, including Japan, have come out in support of the scientific recommendation which if adhered to would ensure the population recovers by 2022.

"We will support the findings of the scientific committee," said Tsunehiro Motooka, an official with Japan's Fisheries Agency. "The measures to date that have been taken have helped protect the resources and make it feasible to increase catch quotas."

The United States, another key player at the negotiations, has said it supports "the rebuilding and term sustainable management of the western and eastern Atlantic bluefin tuna stocks by adopting science-based and precautionary conservation and management measures that ensure continued stock growth."

But environmentalists also said it was too early to celebrate.

For one thing, the European Union pressured by fishing nations like Spain and Italy has left open the possibility that it will push to increase quotas at the ICCAT meeting to 14,900 tons - something ICCAT scientist have said still would allow the continued recovery of bluefin.

"We welcome the unprecedented rational and cautious approach taken by EU Member States, but we cannot help but fear the consequences of proposing any increase in the bluefin quota," said Maria Jose Cornax, a fisheries campaign manager for the environmental group Oceana Europe. "To do so means opening a Pandora's box, because it not only could fuel third countries' calls for unsustainable quota increases, but it could also jeopardize EU proposals for shark conservation, which are often affected by bluefin political discussions."

There is also the impact of the Arab Spring, with Libya is demanding that its quota of 995 tons be increased since the civil war disrupted fishing last year. Algeria is also wants to increase its quota compensate for an ICCAT decision that shifted some of its quota to Libya several years ago.

Even if the current quota be endorsed at the ICCAT meeting, environmentalist and ICCAT's scientist acknowledge more has to be done to ensure the survival of Bluefin. They are calling for increased efforts combating illegal fishing with greater enforcement, reducing the numbers of boats allowed to fish and improving the data collected especially from fish farms to ensure the science is stronger when the next assessment is done in 2015.

"None of these measures really add up unless they are complied with and unless there is enforcement," said Susan Lieberman, deputy director of international policy for Pew. "There is significant illegal fishing and overfishing above the quotas in the Atlantic Ocean in ICCAT. It is extremely important for the future of those fisheries, for the future of fishing communities and for those governments and fishing industries that illegal fishing be stopped and that there be efforts ensured that rules and regulations of ICCAT are good, but not only good, but complied with."