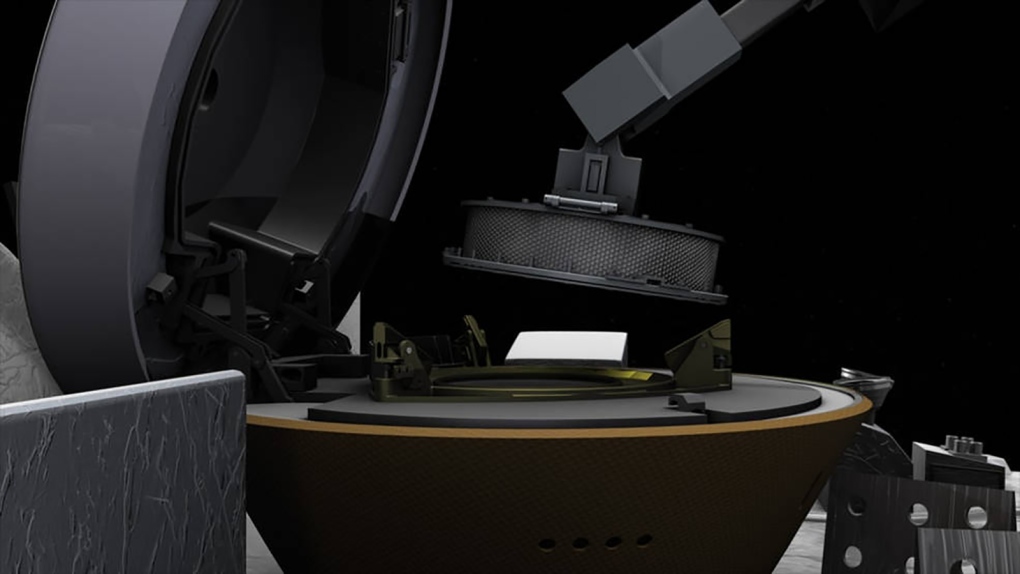 This illustration shows NASA's OSIRIS-REx spacecraft stowing the sample it collected from Bennu on Oct. 20. (NASA/University of Arizona, Tucson/CNN)

A week after collecting a sample from the near-Earth asteroid Bennu, NASA's OSIRIS-REx spacecraft will stow the sample to protect it from leaking into space on Tuesday.

The mission team received images sent by the spacecraft last Thursday that revealed the sample collection head was full of surface material -- so much so that a flap was wedged open by rocks, allowing particles to escape into space.

The team canceled scheduled maneuvers for the spacecraft that would have been used to estimate the mass of the sample they collected. But the researchers are confident that the spacecraft collected well over the mission's requirement of 2 ounces or 60 grams.

Due to the success of the sample collection, the team worked over the weekend to expedite preparations for stowing the sample, which was originally scheduled for November 2.

"The abundance of material we collected from Bennu made it possible to expedite our decision to stow," said Dante Lauretta, OSIRIS-REx principal investigator at the University of Arizona, Tucson, in a statement. "The team is now working around the clock to accelerate the stowage timeline, so that we can protect as much of this material as possible for return to Earth."

The collection head will be stowed in the spacecraft's sample return capsule to protect material gathered by the spacecraft during its brief and historic roughly 6-second touchdown on Bennu last week.

This is NASA's first mission to land on and collect a sample from an asteroid, and it will be returned to Earth in September 2023. .

The asteroid and the spacecraft are currently more than 200 million miles from Earth. This creates a one-way, 18.5-minute communication delay between OSIRIS-REx and its mission team on Earth.

The spacecraft worked autonomously during the collection event due to this delay last week. But stowing is a different story.

Each stage of stowing the sample requires oversight and commands sent by the team. Basically, every time the spacecraft completes a step, it sends back data and images to the team. Once the researchers receive them, they assess OSIRIS-REx's progress and sends another command.

This will ensure that the collection head is placed in the capsule with proper care.

This stowing process will take multiple days by the team's estimate, but this should result in the sample being safely stowed and sealed so it can return to Earth.

To aid this process, the team members will rely on a new imaging sequence to help them observe material leaking from the collection head. They can also use this to make sure that escaping particles don't cause an obstacle to stowing.

The spacecraft won't depart for Earth until March 2021 when the asteroid is in alignment with Earth to provide a more fuel-efficient trip home.

"I'm proud of the OSIRIS-REx team's amazing work and success to this point," said Thomas Zurbuchen, associate administrator for NASA's Science Mission Directorate, in a statement.

"This mission is well positioned to return a historic and substantial sample of an asteroid to Earth, and they've been doing all the right things, on an expedited timetable, to protect that precious cargo."