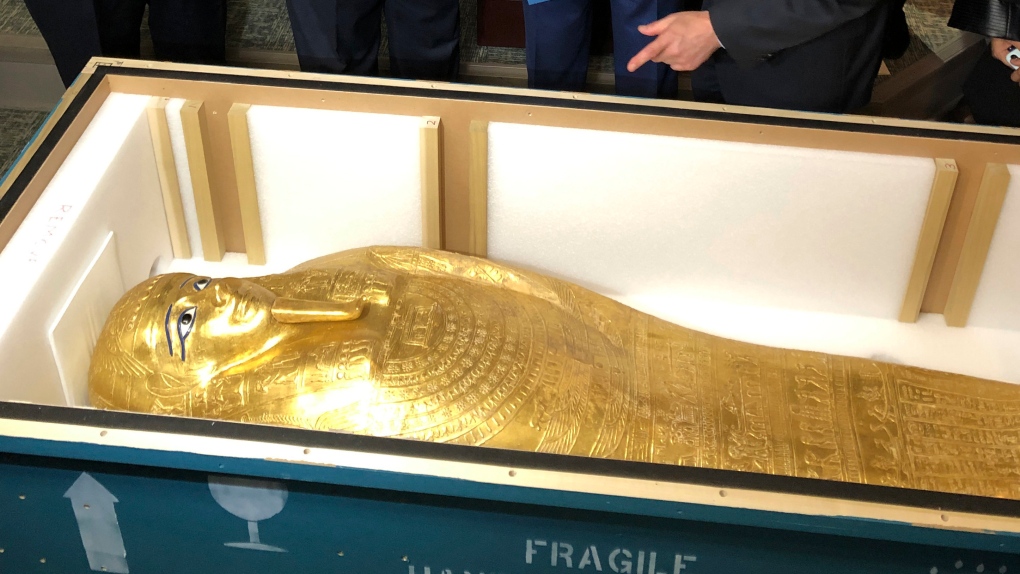 CAIRO -- Egypt displayed a gilded ancient coffin from the first century B.C. on Tuesday, which New York's Metropolitan Museum of Art returned last week after U.S. investigators determined it to be a looted antiquity.

The coffin once held the mummy of Nedjemankh, a priest in the Ptolemaic Period some 2,000 years ago. It was put on display at the National Museum of Egyptian Civilization in Cairo.

Antiquities Minister Khaled el-Anany said the repatriation of this "unique, wonderful" artifact shows a "very strong solidarity" between Egypt and the U.S.

The Met bought it from a Paris art dealer in 2017 for about $4 million and made it the centerpiece of an exhibition. The precious artifact was removed in February after proof of its theft was presented.

Egyptian authorities proved the coffin's export license was "a false one" following a request from U.S. authorities, el-Anany said in his address.

"We are delighted that this beautiful artifact is here in this museum in Egypt where it ought to be," he said.

Mostafa Waziri, secretary general of the Supreme Council of Antiquities, said the surface of the coffin was elaborately decorated with scenes and hieroglyphic texts, which were intended guide the priest on his journey from death to the eternal afterlife.

"The name of this coffin's owner is written here 'Nedjemankh' and his title is stated as well 'priest.' Most probably this coffin was discovered in middle Egypt," he said. The exact location would be clarified through further investigations, he added.

The highly ornamented ancient coffin is made of cartonnage and has an elaborately decorated surface sheathed in gold, Waziri said.

The Met has apologized to Egypt. The museum's head Daniel Weiss said it was a fraud victim and unwitting participant in the illegal trade of antiquities.

U.S. investigators determined that the coffin was smuggled from Egypt through the United Arab Emirates, Germany and France. They say the museum was given fraudulent documents, including a forged 1971 Egyptian export license.

"Returning stolen cultural treasures to their countries of origin is at the core of our mission to stop the trafficking of stolen antiquities," Vance Jr. said.

In recent years, Egypt has drastically stepped up efforts to stop the trafficking of its antiquities. It has warned foreign museums that it will not help them mount exhibits on ancient Egyptian antiquities unless they return smuggled artifacts. The antiquities ministry said it retrieved more than 1,000 artifacts and around 22,000 ancient coins since 2016.

Egypt has also sought publicity for its new archaeological discoveries in the hopes of reviving its key tourism sector, which was badly hit by the turmoil following a 2011 uprising that toppled longtime autocrat Hosni Mubarak.