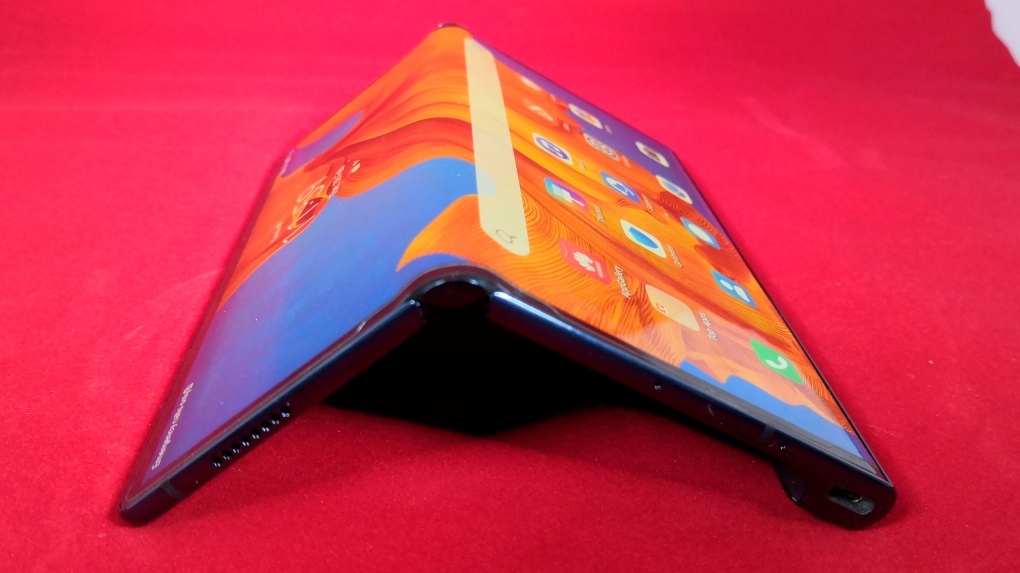 In this Feb. 18, 2020 photo, a view of the latest version of Chinese tech company Huawei’s folding smartphone, the Mate Xs, on display, at a press preview in London. (AP Photo/James Brooks)

LONDON -- China's Huawei unveiled its latest folding smartphone Monday and its first such device to be available internationally, competing in a niche category with new models from Samsung and Motorola.

The company took the wraps off the new Mate Xs by video instead of a press launch, as the tech show in Spain where it had planned to hold the unveiling was cancelled over worries about the new coronavirus outbreak.

Like its predecessor, the Mate X, which only saw limited release in China last year, the display wraps around the phone's outside when closed and unfolds to a tablet-size eight-inch screen. The company says there are improvements under the hood, including a redesigned four-layer screen and upgraded "falcon wing" hinge. It also gets Huawei's latest homegrown Kirin 990 chipset, a four-lens camera system and can be used on a wider range of high-speed 5G network bands.

However, the Mate Xs also faces a distinct disadvantage because it lacks the full Android operating system by Google. The Trump administration last year blocked Huawei's access to U.S. components and technology on national security grounds, part of a wider trade and tech war between the U.S. and China.

Instead, the Mate Xs runs a stripped-down open source version of Android. Users can still download apps but they'll be from Huawei's own app store, not the Google Play store.

Faced with stagnating sales as consumers hold on to their devices longer, smartphone makers have turned to foldable technology to rejuvenate the market. It's unclear, however, whether the pricey devices will appeal to more than just die-hard tech enthusiasts.

There are also questions about reliability. Samsung's first folding device, the Galaxy Fold, was plagued by reports of screens breaking after it was unveiled last year, delaying its launch for months.