Bison, other beasts return life to a former Soviet army base 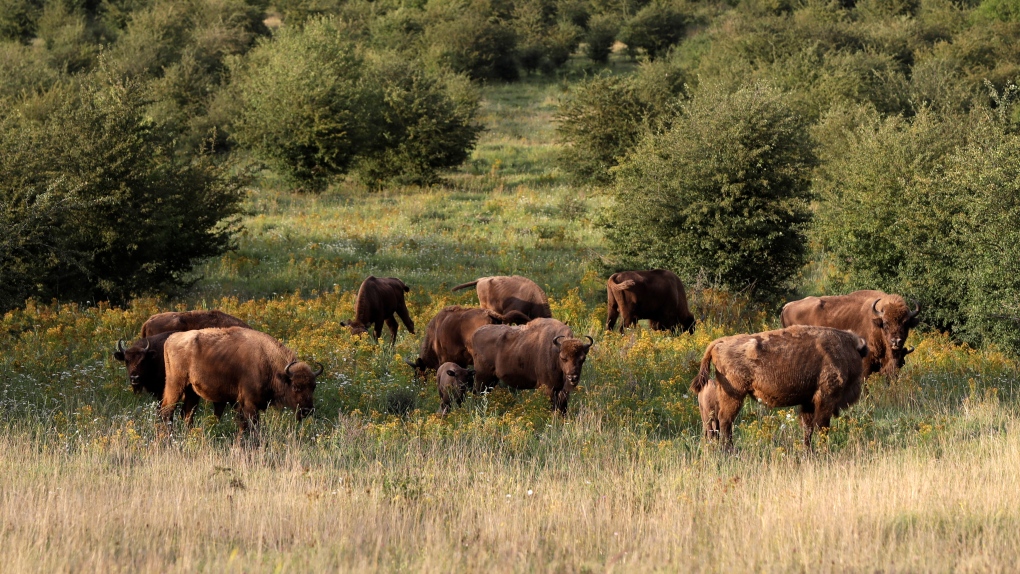 MILOVICE, CZECH REPUBLIC -- Wild horses, bison and other big-hoofed animals once roamed freely in much of Europe. Now they are transforming a former military base outside the Czech capital in an ambitious project to improve biodiversity.

Where occupying Soviet troops once held exercises, massive bovines called tauros and other heavy beasts now munch on the invasive plants that took over the base years ago.

The animals are turning the former Milovice base 35 kilometres (22 miles) northeast of Prague into a miniature version of the steppe that once rolled across the continent.

Wiped out in the wild, the animals now have the chance to live together again in relative freedom. Conservationists deployed them at Milovice five years ago. Now they hope to enlarge the sanctuary by one third to some 360 hectares (890 acres) this year.

The animals' task is to improve biodiversity among local plants by eating invasive ones while saving endangered species, said Dalibor Dostal, the director of European Wildlife, an organization behind the project.

"It's a miraculous change," Dostal said. "Nobody expected that the whole process would go ahead so fast and the area would change so much in just a few years."

He said the large animals are as key in preserving the ecosystem "as trees are for forests."

David Storch, an environment professor at Prague's Charles University who was not involved in the project, agreed.

He said the project is "absolutely unique" because it shows that nature can be preserved not only by protecting it from human activities but also by actively shaping it with the big-hoofed animals.

The selection of the animals was based on the experiences of conservationists in various countries.

Domestic animals such as sheep were ruled out because they would feed on endangered plants as well. Mechanical cutting of the invasive plants is too costly.

While invasive grasses are a delicacy for wild horses, European bisons and tauros prefer bushes, creating an ideal partnership.

The invasive plants began to grow after the Soviet troops who stayed on after the 1968 Soviet-led invasion of then-Czechoslovakia finally withdrew from the base in 1991.

The Czech project includes tauros that were transferred from the Netherlands, where a cross-breeding program aimed at coming close to the original species, the aurochs, started in 2008. That wild ancestor of today's cattle became extinct in the 17th century.

The project now has herds of 27 European bisons, 25 aurochs and some 70 wild horses.

The animals move freely on the pastures on the former military base year-round. With water sources available, they are able to care for themselves, even in winter.

The landscape quickly saw signs of transformation. Flowers started to dot the area as early as the second year of the project as the large herbivores reduced the tall, dense invasive grasses.

Today, the whole area changes its colours over the course of the year, depending on what flowers are in bloom.

The most precious is the star gentian, also known as cross gentian. The blue flower is now flourishing at Milovice, more than anywhere else in the country.

The former base also has become abundant in other animals and insects. The Adonis blue, a butterfly, has been spotted there for the first time since 1967.

"If we give nature a chance, if we give it time and space, it can take care of many things," said Miloslav Jirku, a biologist with the Czech Academy of Sciences who has been involved in the project from the start.

"At the very beginning, I thought that lots of species that used to be here in the 1990s would have to be returned artificially. Today, a number of them are already here without us doing anything about it."