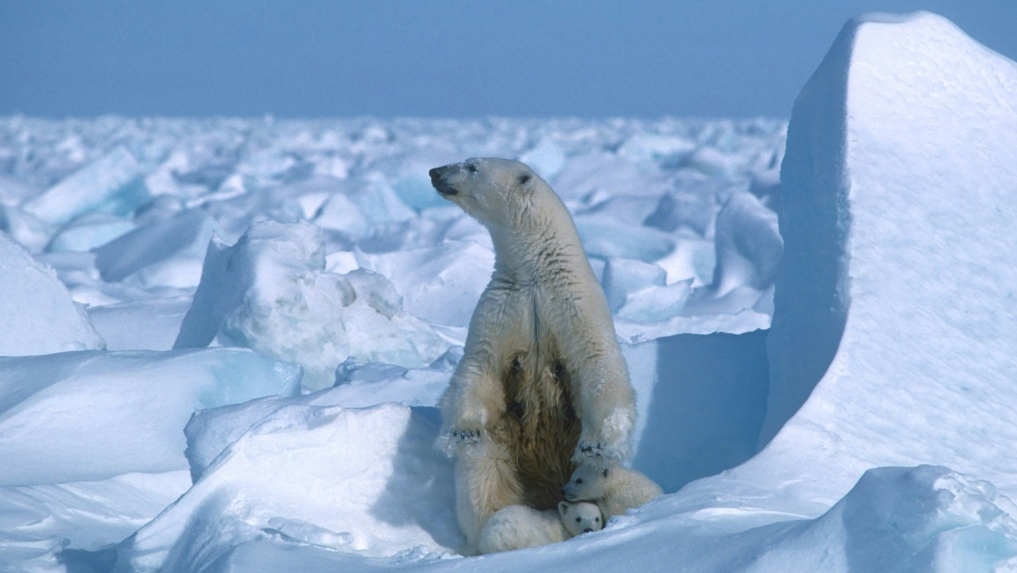 A polar bear with its cubs in the Alaska sea ice in 1985 -- Arctic summer sea ice melted in 2020 to the second smallest area since records began 42 years ago, U.S. scientists announced. (AFP)

Artic sea ice melts in summer and reforms in winter, but precise satellite imagery taken regularly since 1979 had documented how the cycle has been shrinking significantly.

The year's minimum was reached on September 15, at 3.74 million square kilometres (1.44 million square miles), according to scientists at the National Snow and Ice Data Center (NSIDC) at the University of Colorado Boulder.

"It's been a crazy year up north, with sea ice at a near-record low... heat waves in Siberia, and massive forest fires," said Mark Serreze, director of NSIDC.

"The year 2020 will stand as an exclamation point on the downward trend in Arctic sea ice extent. We are headed towards a seasonally ice-free Arctic Ocean, and this year is another nail in the coffin."

Unlike melting glaciers on land, melting sea ice does not directly contribute to rising sea levels as the ice is already on the water, but less ice means less solar radiation is reflected and more is absorbed by the oceans, warming them.

"The rapid disappearance of sea ice is a sobering indicator of how closely our planet is circling the drain," Greenpeace Nordic Oceans campaigner Laura Meller said in a statement released from a ship on the edge of the sea ice.

"As the Arctic melts, the ocean will absorb more heat, and all of us will be more exposed to the devastating effects of climate breakdown.

"We need to hit the reset button right now on how we look after each other and our planet by protecting at least 30 per cent of our oceans by 2030 to help our planet cope with the climate breakdown."

“The year 2020 will stand as an exclamation point on the downward trend in Arctic sea ice extent. We are headed towards a seasonally ice-free Arctic Ocean and this year is another nail in the coffin.” We've called the likely #Arctic sea ice minimum extent: https://t.co/xfjgaJCPSZ pic.twitter.com/t5DBMJ5o5e