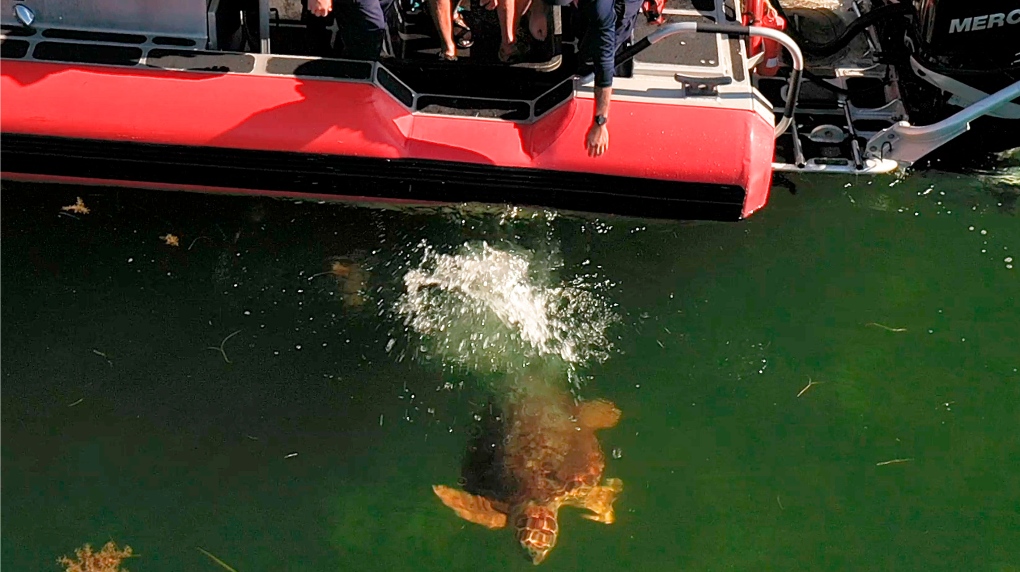 In this aerial drone photo, provided by the Florida Keys News Bureau, staff from the Florida Keys-based Turtle Hospital and U.S. Coast Guard release "Emma," a loggerhead sea turtle, Thursday, Aug. 6, 2020, off Islamorada, Fla. "Emma" was one of two turtles Coast Guard personnel helped to rescue about two months ago off the Keys that were treated at the Turtle Hospital for various ailments. (Bob Care/Florida Keys News Bureau via AP)

ISLAMORADA, FLA. -- Two rehabilitated sea turtles, rescued at different times and locations by the U.S. Coast Guard, have been released off the Florida Keys.

"Emma," a 150-pound (68-kilogram) female loggerhead sea turtle, was recovered in June after she was found floating in the Atlantic Ocean off Islamorada. "Emma" was transported to the Turtle Hospital where treatment included emptying excess air out of her body cavity and a regimen of fluids and vitamins.

The entanglement caused irreparable damage to Bubbles' rear flipper, resulting in amputation surgery. Bubbles was also treated for pneumonia and other issues.

Coast Guard Petty Officer Michael Lees described the rescue and Thursday's release of the sea turtles as a rare treat.

"It's fulfilling to see the final result of a turtle rescue," Lees said. "Rarely do we get to see the actual release of the turtle."

The Turtle Hospital in the Keys has been rescuing, rehabilitating and returning sea turtles to the wild since 1986.