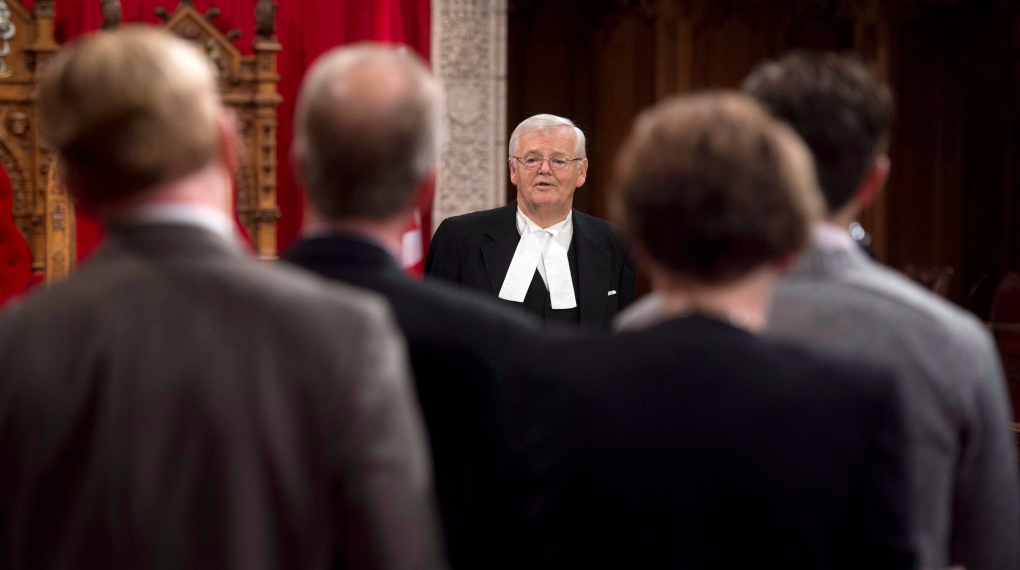 Noel Kinsella holds a news conference in the Senate chamber on Parliament Hill in Ottawa on Dec. 2, 2013. (Adrian Wyld / THE CANADIAN PRESS)

OTTAWA -- The Speaker of the Senate is directly challenging NDP Leader Tom Mulcair, an unheard-of step for the normally neutral referee of the upper house.

The Conservative Speaker's missive came several hours after Mulcair told the House of Commons that Kinsella and Liberal Sen. Pierrette Ringuette "pulled the exact same trick as Mike Duffy" -- one of four disgraced senators under RCMP investigation for allegedly defrauding the Senate.

Kinsella says he and Ringuette, both senators from New Brunswick, are entitled to claim reimbursement for their accommodations in Ottawa -- as are New Democrat MPs whose home ridings are more than 100 kilometres from the national capital region.

He says Mulcair's "unfounded personal attack" against him and Ringuette amounts to an attack on his own NDP members.

And he suggests Mulcair, who lives in the taxpayer-provided official Opposition leader's residence, is in no position to criticize parliamentarians who must keep a secondary residence in the capital.

"(Mulcair) lives for free in a lovely house in upscale Rockcliffe Park, at Stornoway," Kinsella said in the statement, issued late Wednesday.

He added that Mulcair's views on the Senate are well-known, inferring that the accusation against him and Ringuette was motivated by the NDP leader's determination to abolish the upper house.

Kinsella's extraordinary intervention was sparked by question period in the Commons earlier Wednesday, when Mulcair questioned why Kinsella and Ringuette have not been suspended from the Senate as have Duffy and two other senators who allegedly made improper expense claims.

"Conservative Sen. Noel Kinsella and Liberal Sen. Pierrette Ringuette pulled the exact same trick as Mike Duffy -- the trick that, on Oct. 24, the prime minister said was the reason for getting rid of Mike Duffy," Mulcair said.

"Why are Noel Kinsella and Pierrette Ringuette still in the Senate?"

Harper defended both senators as "longtime residents" of New Brunswick, unlike Duffy who claimed his longtime Ottawa home as a secondary residence and a little-used cottage in Prince Edward Island as his primary home.

Both Kinsella and Ringuette owned homes in Ottawa, as well as New Brunswick, before their appointment to the Senate.

Wednesday's missive marks the second time this week that Kinsella has broken with precedent.

On Monday, he held an extraordinary, hour-long news conference in the Senate chamber. He fielded questions about the Senate expenses scandal but also provided a history lesson on the value of having a second parliamentary chamber of sober second thought.

During that session, Kinsella disclosed that he pays taxes in New Brunswick and holds a driver's licence and health card from that province -- all criteria used by the Senate's internal economy committee in determining primary residency.

He also pointed out that the Speaker of the Senate is not quite as neutral or non-partisan as the Speaker of the Commons. The Senate Speaker may join in debate and vote on bills and motions, unlike his Commons counterpart who may vote only to break a tie and doesn't participate in debate.

Moreover, Kinsella said he attends Conservative national caucus meetings, whereas the Commons Speaker does not.