Rob Ford returns to Toronto: 'I have no one to blame but myself'

Rob Ford returned to city hall on Monday after a two-month stint in rehab, offering a public apology for his past behaviour and asking for another opportunity as mayor of Toronto.

In a news conference Monday afternoon, Ford said he is "ashamed and humiliated" by some of the choices he made in the past.

"I was wrong, and I have no one to blame but myself," he said in a 15-minute-long statement.

"It was never my intention to embarrass the city or offend my fellow members of council. I deeply regret some of the personal choices I have made in the past."

Ford also apologized to mayoral candidate Karen Stintz for the "hurtful and degrading remarks" he made about her. "I offer a deep-felt apology for my behaviour," he said.

Ford took a sudden leave of absence from office in late April to seek professional help for substance abuse at GreeneStone, a rehab facility in Bala, Ont. It came following a new string of racist, sexist and homophobic comments that were recorded and made public in media reports.

In one of the recordings, Ford is allegedly heard making lewd comments about Stintz, who is also a council colleague, while at a bar. The comments were made months after Ford first admitted to using crack cocaine last November.

Stintz later released a statement in response to Ford's apology.

"If the mayor wants to apologize to me, he's got my number and he can call," Stintz said. "It’s a private matter for him to discuss with me directly."

On Monday, Ford addressed his addictions, noting his denial was harming him and his family.

"I had convinced myself that I did not have a problem," Ford said. "But it soon became obvious that my alcohol and drug use was having a serious impact on my family, on my health, and on my job as mayor."

But since completing "intensive" therapy, Ford said his commitment to "living clean is now unwavering." He thanked the staff at GreenStone, saying they helped saved his life.

"They forced me to confront my personal demons," he said. "I learned that my addiction is really a disease, a chronic medical condition that will require treatment for the rest of my life."

According to Toronto-based addictions counsellor Mark Elliot, however, Ford's progress in rehab may be at risk unless he drops out of the mayoral race and leaves city hall.

"When you come into recovery and you get out, you've got to change the people, places and things associated with your addiction. In his case, that means everything," he told CTV Toronto.

Elliot described rehab as an "artificial world" where it's much easier to kick an addiction. But as Ford returns to the pressure-filled Toronto spotlight, he'll face pressure to lapse into his old ways.

Elliot said he would recommend Ford drop out of the mayor's race and focus on getting healthy before diving back into Toronto politics. "Rob Ford, save yourself," he said. "Toronto will still be here when you're ready."

While the mayor did not take any questions from a hand-picked group of reporters at Monday’s news conference, Ford said he hopes to continue working for the taxpayers of Toronto for many years to come.

"We have a beautiful, clean, safe city that is one of the greatest places in the world to live and do business," he said. "But there's still much more to accomplish."

"I plan to continue fighting for the taxpayers of Toronto."

On Sunday, Doug Ford told reporters on Sunday that the mayor is eager to get back to work. "He'll be hungry," said the mayor’s brother. "He's looking forward to it and he's had a lot of time to do what he needs to do."

Doug Ford said his brother has dropped a considerable amount of weight, going from a size 52 to 44 waistline.

"I'm heavier than he is now," the councillor said on Sunday.

Mayoral candidate John Tory was quick to respond to Ford's comments Monday, renewing his call for Ford to step down.

"My view remains the same. That he should resign from office, that he should have resigned some time ago in light of everything that's happened," Tory said.

Fellow mayoral candidate Olivia Chow also commented on Ford's return, saying that it was time for Toronto to elect a new leader.

The question is if Rob Ford is a good mayor. His policies and values say no, and we need a new mayor. #TOpoli

Still, the latest polls suggest that the embattled mayor’s popularity has actually risen during his two-month stint in rehab.

Quito Maggi, a political strategist with Mainstreet Technologies, couldn't explain why Ford has risen in the polls, but suggested he may be able to weather this latest political storm.

"Rob Ford seems to be that sort of enigma of politics," he said. "What applies to other politicians and other campaigns doesn't necessarily apply to him."

"Forgiveness is one of those wonderful evangelical things that happens in America after a tearful confession," Bonner told Canada AM. "He doesn't necessarily have to have forgiveness, or the majority of voters."

Torontonians will vote for the next mayor on October 27. 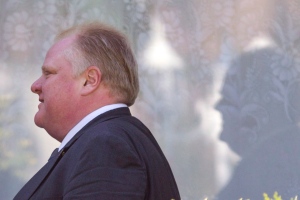 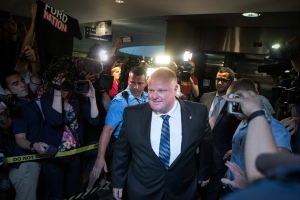